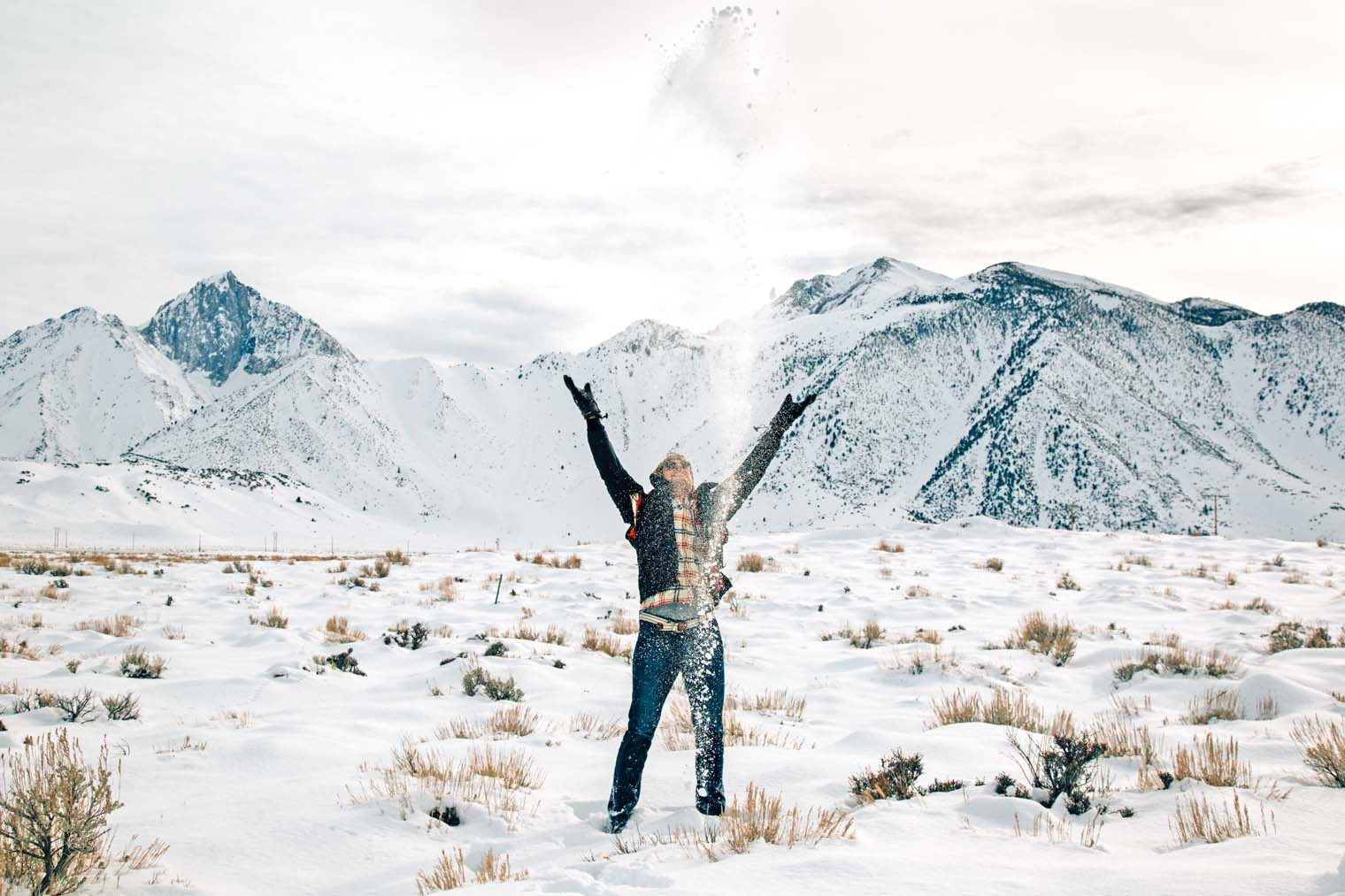 There were five of us huddled inside a small building near Main Lodge at Mammoth Mountain. A winter storm had just hit the area and the conditions were looking fierce. We were supposed to go on a snowmobiling tour that afternoon, but since we could barely see, we figured it would be canceled. Nevertheless, the lady behind the desk said our guide would be back momentarily with an assessment of the conditions.  A minute later the door burst open, snow and wind blasting into the room. In stepped our guide — goggles on, icicles in his beard, and completely caked in snow — who cheerfully exclaimed: “Conditions look great. Let’s go riding!”

A few days earlier, Megan and I were in sunny Southern California, preparing to board a flight to Mammoth Lakes out of Burbank. We had been invited to participate in a campaign with Mammoth Lakes Tourism Board and were going to spend the next couple days experiencing some of the many winter activities the area has to offer. We had been to Mammoth before during the summer, but this would be our first time visiting in the winter. 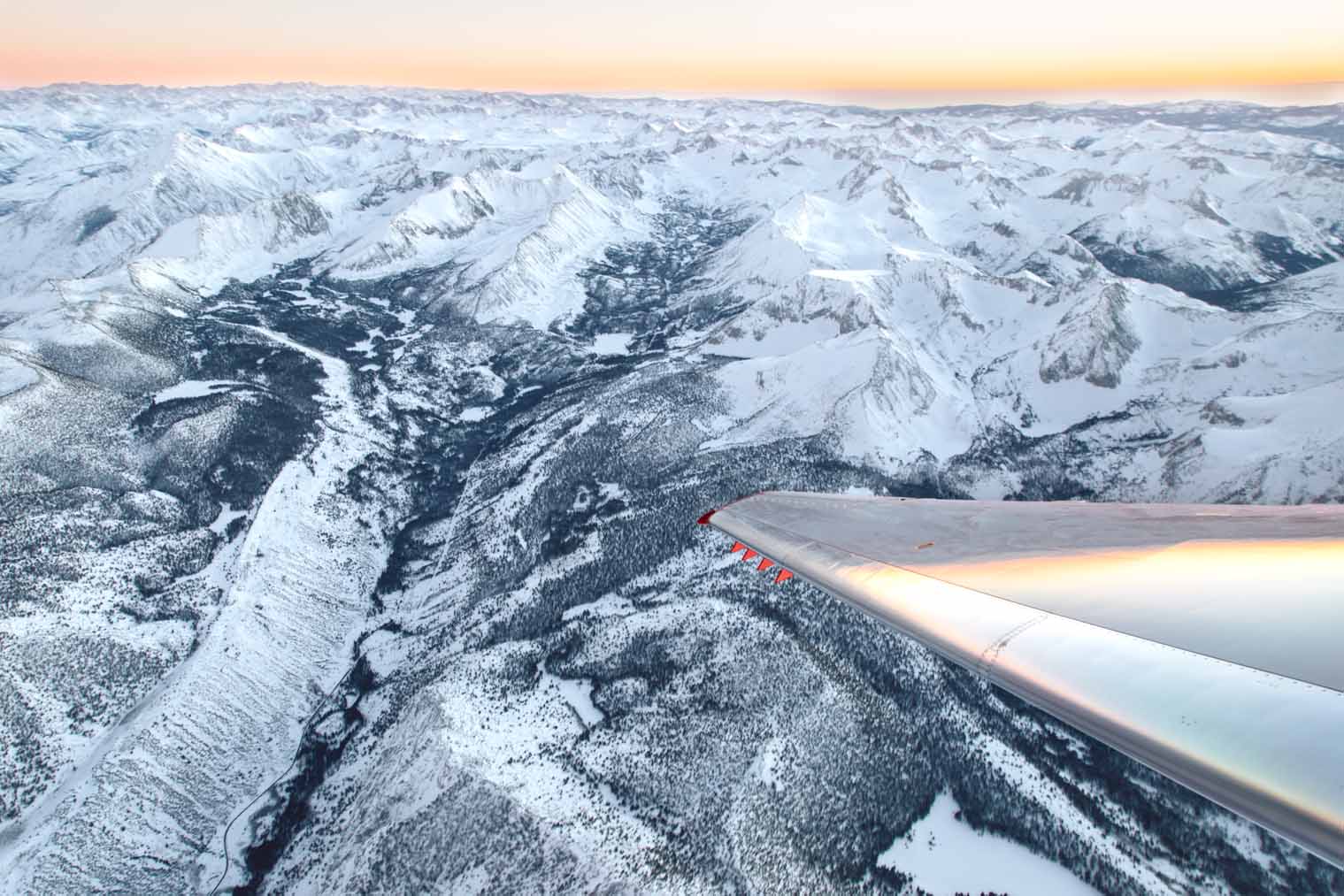 For the flight up, we were using JetSuiteX. With the ease and convenience of a charter service but the availability and affordability of a regional carrier, JetSuiteX was by far the fastest and most hassle-free option to get from LA up to Mammoth Lakes. During the hour-long flight, we were able to enjoy cocktails while watching the sun set over the snow-capped Sierra mountains. It sure beat the six hour drive through the cold and windy Mojave desert.

At the Mammoth-Yosemite Airport, we rented an AWD Nissan Rogue and made our way to Tamarack Lodge. This charming lakeside resort consists of the main lodge as well as dozens of smaller rental cabins on the property. Our “studio” cabin looked like something out of a fairy tale, made even cozier by the fact that it came equipped with a wood-burning stove. 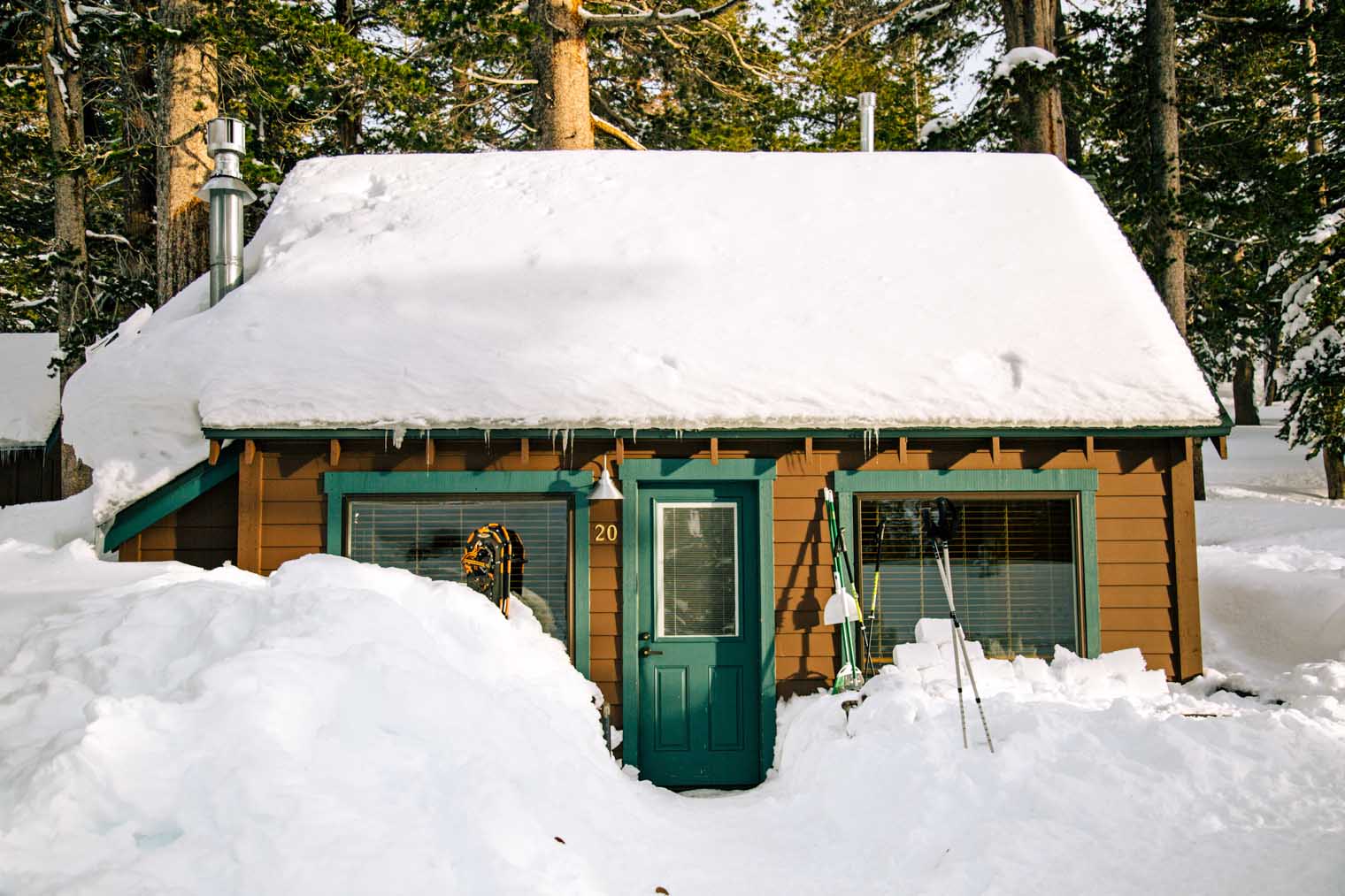 The next day it was bright and sunny, allowing us to fully take in the amount of snow on the ground. In terms of snowfall, the 2016-2017 season has been off the charts for Mammoth Lakes. As of the time of our visit, Mammoth had the most snow of any ski resort in the country, with a 300-inch base at the summit. Naturally, we were eager to get out on the slopes.

Black Tie Ski Rentals had dropped off our ski gear the night before. The rental company will come out to your hotel or lodge and do an in-person fitting, so you can spend more time on the slopes and less time tracking down the outfitter. When you’re done with your gear, you call them, leave it all on the front porch, and they’ll come to pick it up. It’s that hassle free. Definitely more of a high-end service, but if you’re trying to maximize your time on the hill and minimize your time waiting in line, then it’s absolutely worth it. 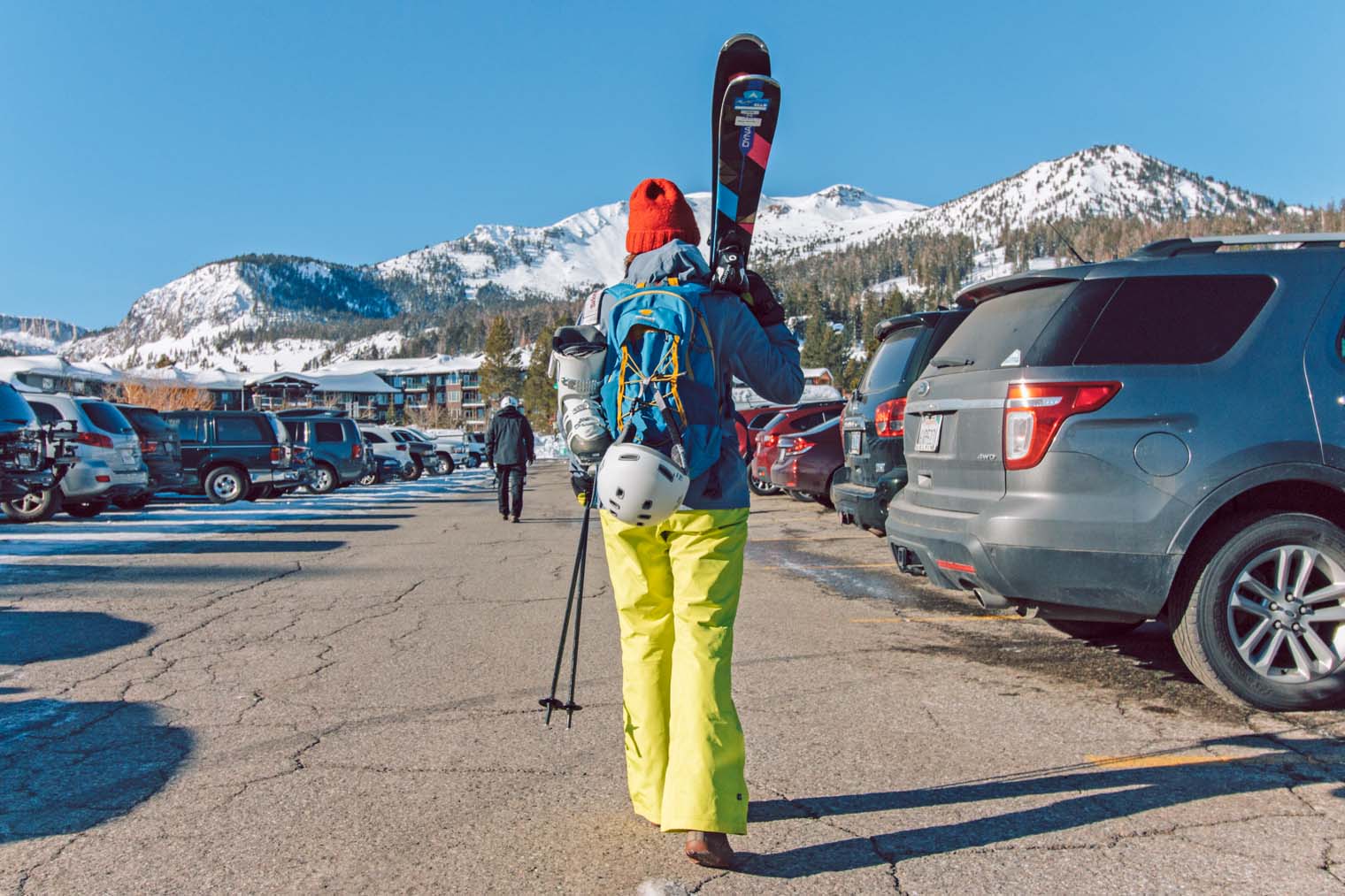 In Southern California, Mammoth Lakes is known as the most accessible premiere ski destination. With over 3,500 acres and 150 named runs, Mammoth Mountain is a true full-service mountain that offers everything from easy groomers to double black diamonds. Their trails break down to about 25% beginner, 40% intermediate, 35% advanced, so there are lots of options for everyone.

Since neither of us are expert skiers, we spent most of our time exploring the 65% designated for beginners and intermediate skiers. A lot of people are attracted to Mammoth Lakes for its extreme terrain, but we had plenty of fun cruising down easy street.  The sun was out, the lift lines were short, and the temperature was warm; we could have hardly asked for better conditions. 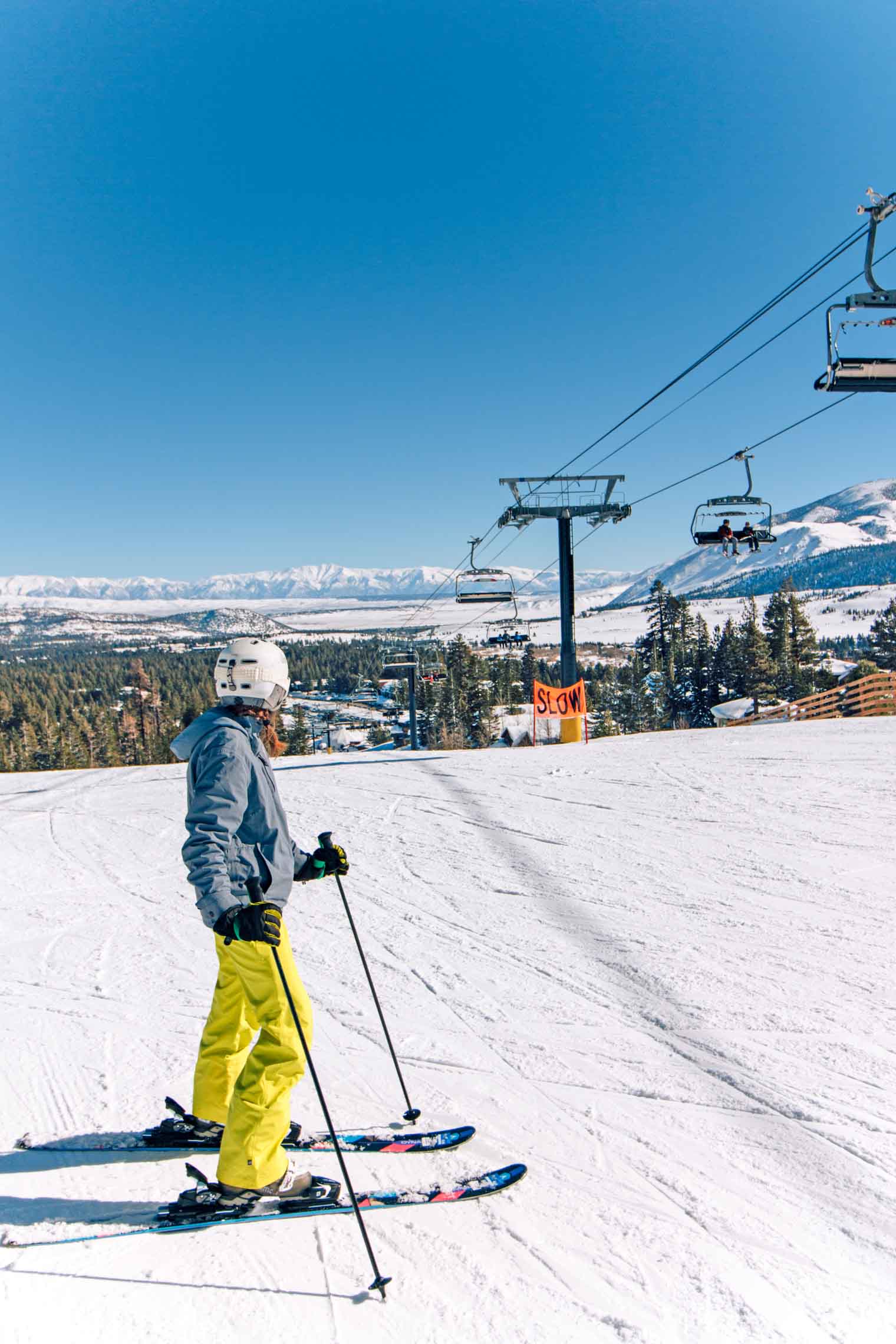 All that was about to change the next day.

The next morning, there were reports that another winter storm was on its way. Thankfully, our first activity was just outside our lodge. Tamarack Lodge is also connected to a Cross Country Ski Center, where we were signed up for a morning lesson. 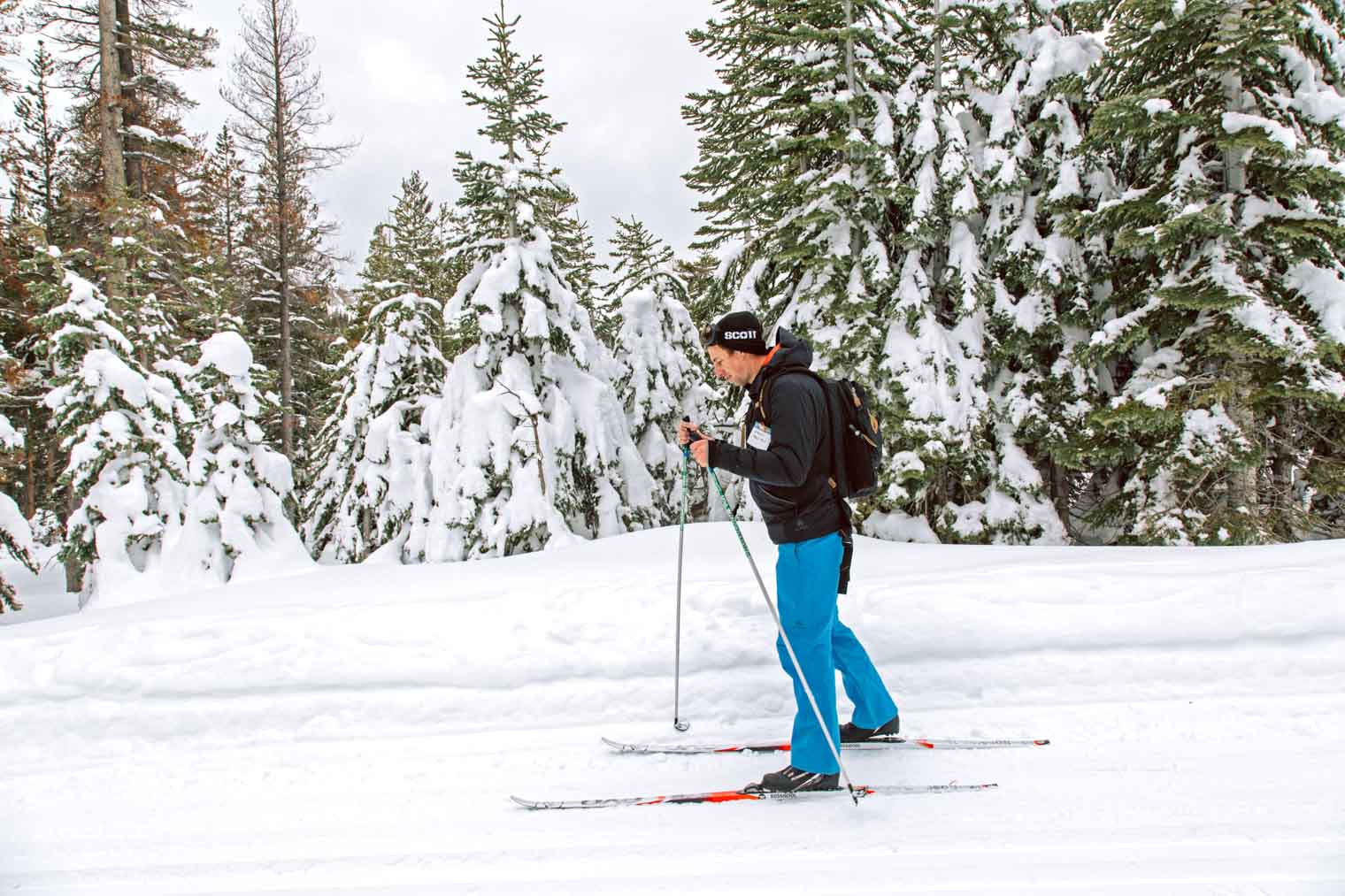 Somewhere between snowshoeing and downhill skiing, cross-country skiing was a uniquely tranquil experience. We had a wonderful instructor, Chloe, who quickly got us comfortable moving around (and stopping). From Tamarack Lodge we had access to 19 miles of groomed cross-country trails, which stretch out to many of the nearby lakes. We took a short tour to explore the vicinity and were pleasantly surprised at the workout we got.

After lunch, we were scheduled to ride snowmobiles with Mammoth Snowmobile Adventures, however, the storm had really started to intensify. This was part of the trip we were really looking forward to, but it seemed increasingly likely it would be canceled. Thankfully, our guide burst in like an Arctic yeti and said we were still on. 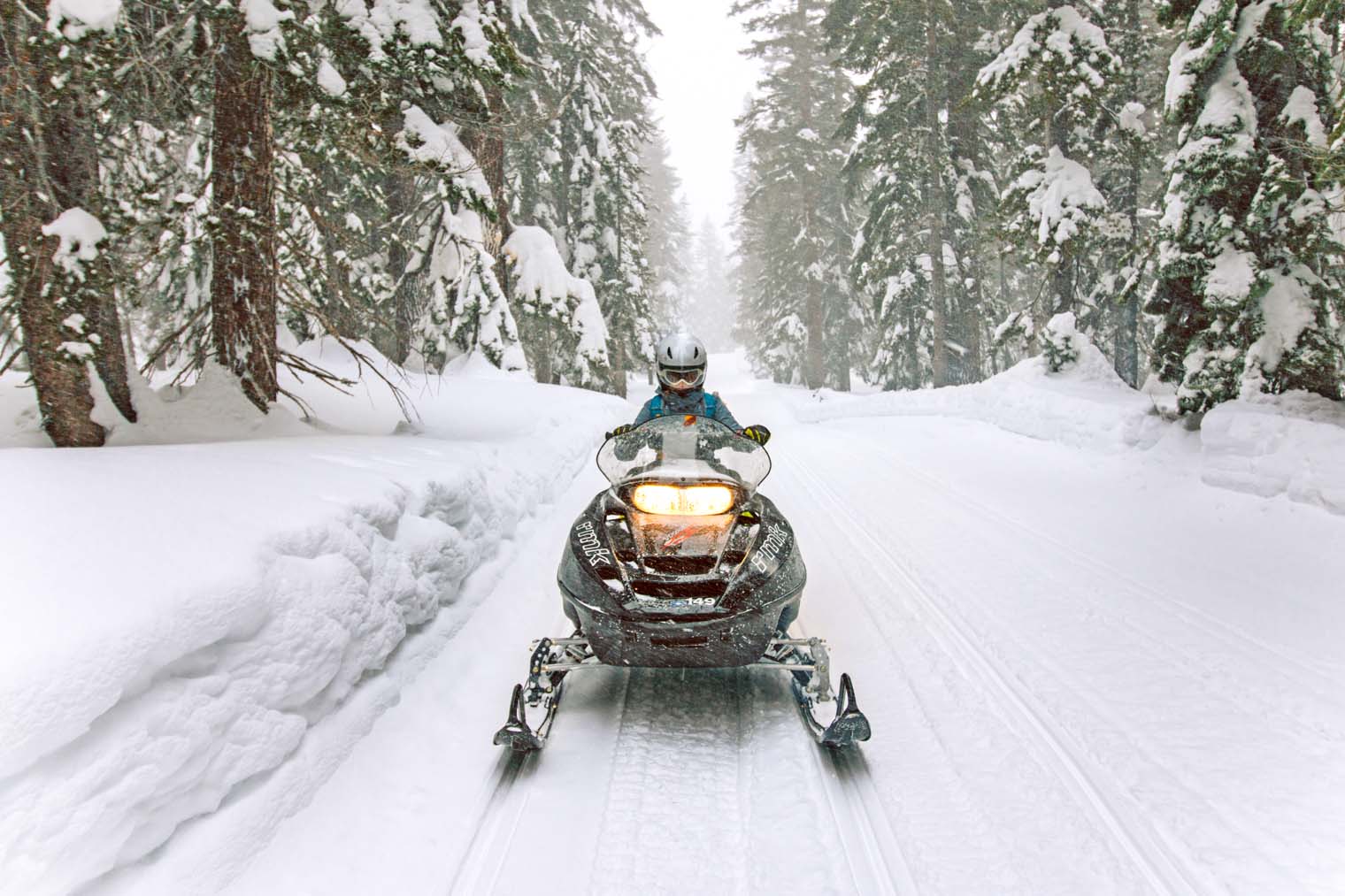 While the wind was sharp and stinging out in the open, the protection of the forest made the ride much more pleasant. In fact, racing through the snow-covered trees with snowflakes whizzing all around us made us feel like we were in a scene from a James Bond movie. Having never driven a snowmobile before, Megan was a little intimidated in the beginning, but toward the end, she was laying into the turns as fast as the guide.

That evening we rode out the storm by hopping around from brewery to brewery. We began at the more established Mammoth Brewing Company before moving on to the more locals-friendly Black Doubt Brewing. We didn’t have a single bad beer, but Mammoth Brewing’s Double Nut Brown and Smokey Bear stood out as our favorites.

The next morning we awoke to the sound of explosions. Heavy snowfall had created avalanche conditions and teams were working to clear the surrounding area with concussive devices. After shoveling our way out of our room and shoveling out to our car, we were ready to head up to June Mountain. 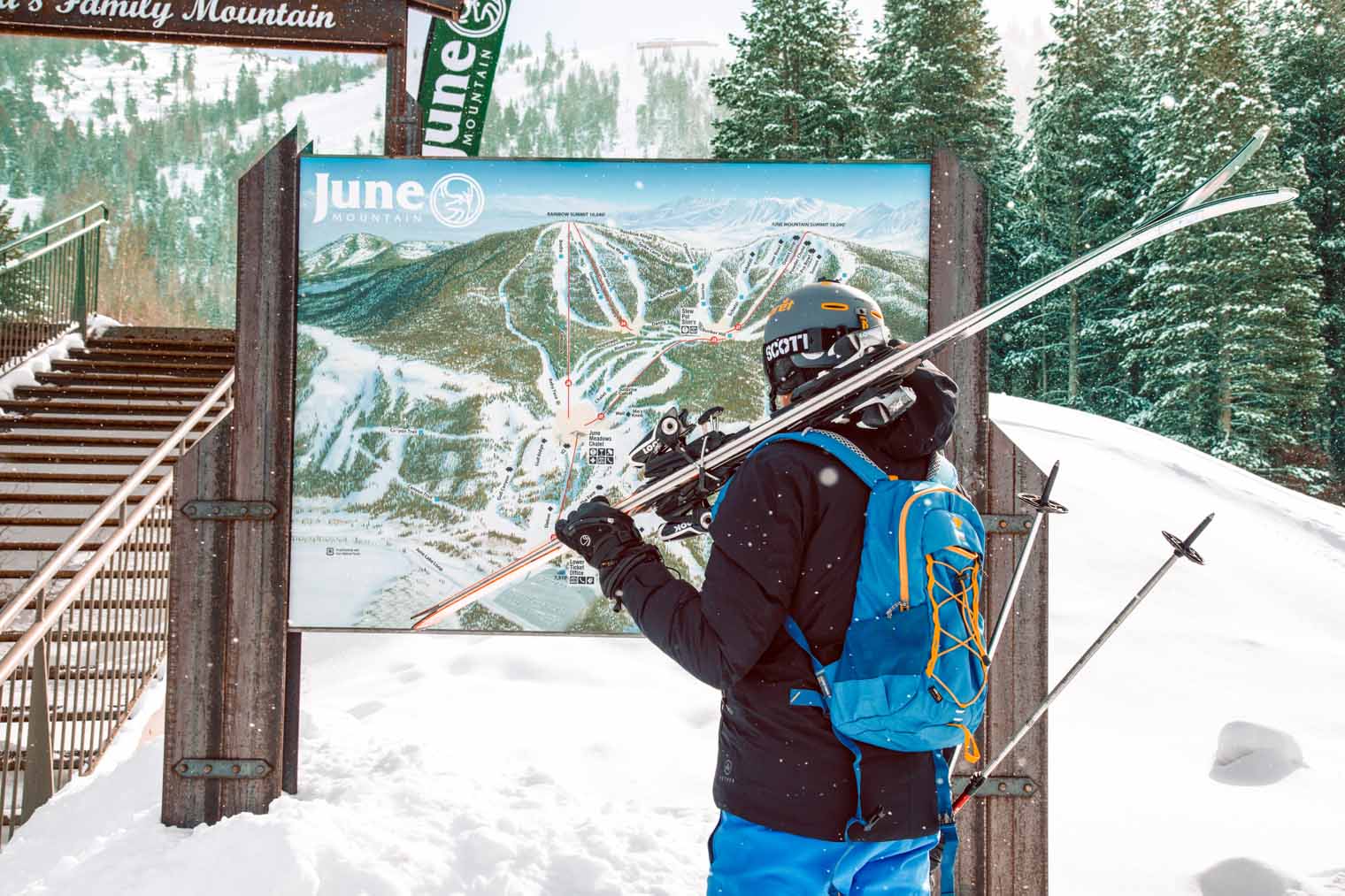 Located about 30 minutes north of Mammoth Lakes, June Lake is a quiet little town with a hidden gem of a ski mountain. Dubbed as California’s Family Mountain, this ski resort doesn’t see the same crowds as Mammoth Mountain, which means shorter lift lines and more of the mountain to yourself. It’s a great place to beat the crowds and take things at a bit of a slower pace.

During our trip, we were told by numerous sources that we absolutely had to go to Ohana’s Food Truck in June Lake — and are we glad we did! Having lived in Los Angeles, we have pretty high expectations when it comes to food trucks, but Ohana’s knocked it out of the park. Megan got an ahi tuna bowl and I settled in for a shredded pork burrito. Even better, the food truck is just a stone’s throw away from June Lake Brewery, so close that they will actually deliver your order to the brewery so you don’t have to wait around in the cold. 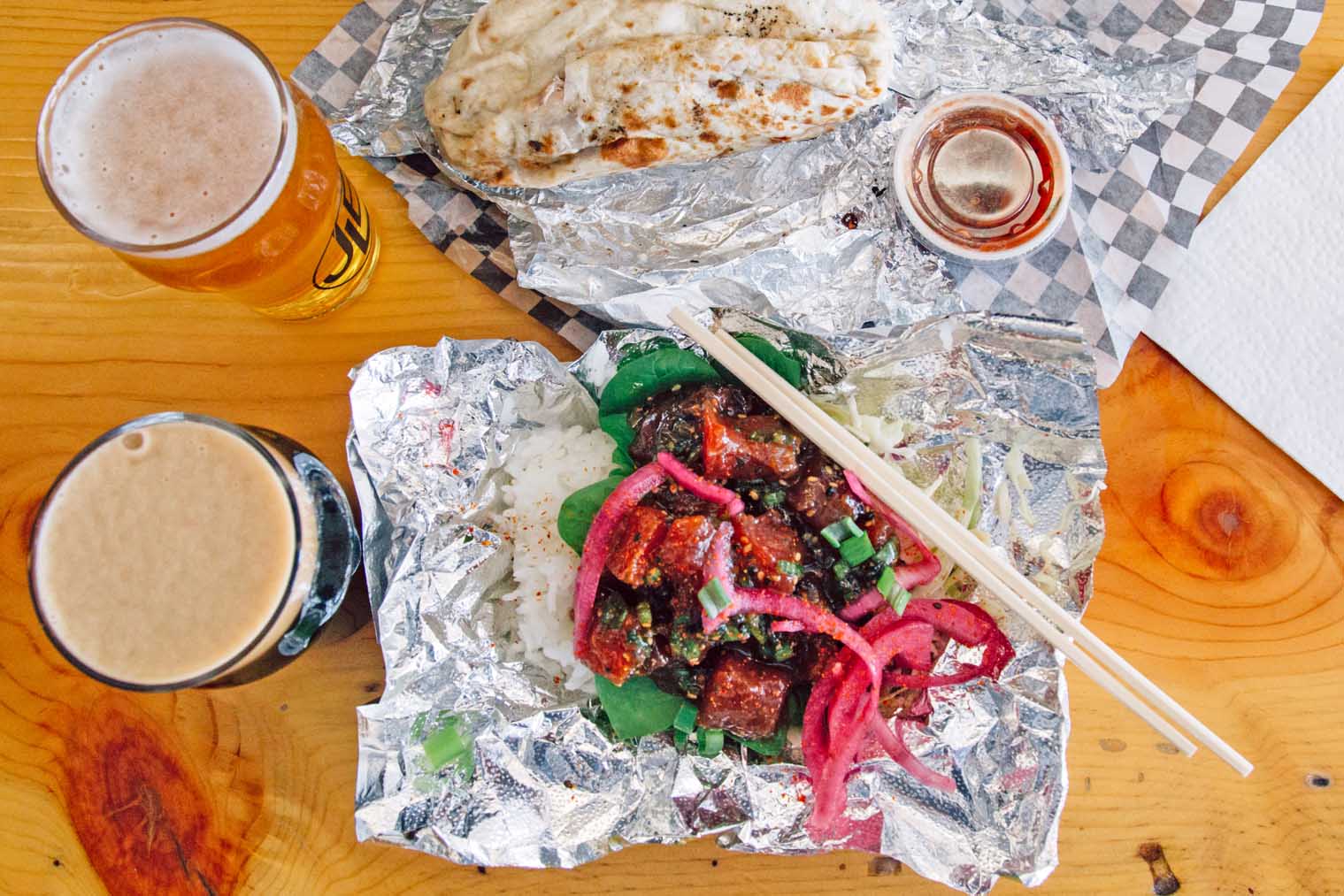 Our time in Mammoth Lakes was coming to an end, but we had one place we still wanted to visit: Wild Willy’s Hot Springs. Located just south of the Mammoth-Yosemite Airport, Wild Willy’s bubbles out of the ground like an all natural Jacuzzi. From the paved road, it’s roughly a two-mile hike and offers some spectacular view of the surrounding sierras. The only problem for us was getting out to it.

With just two hours before our flight back, we arrived where the paved — and conveniently plowed — road ended. However, the massive snow dump the previous night made navigating to the trail impossible. We attempted it on foot, but I sunk in up to my knees and Megan up to her thighs. There was no way we could make it out there without snowshoes.

Sadly, we couldn’t make it out this time. But we had enjoyed a relaxing soak there a few years ago, so we at least have some photos to show to give you an idea of what we had been looking forward to! 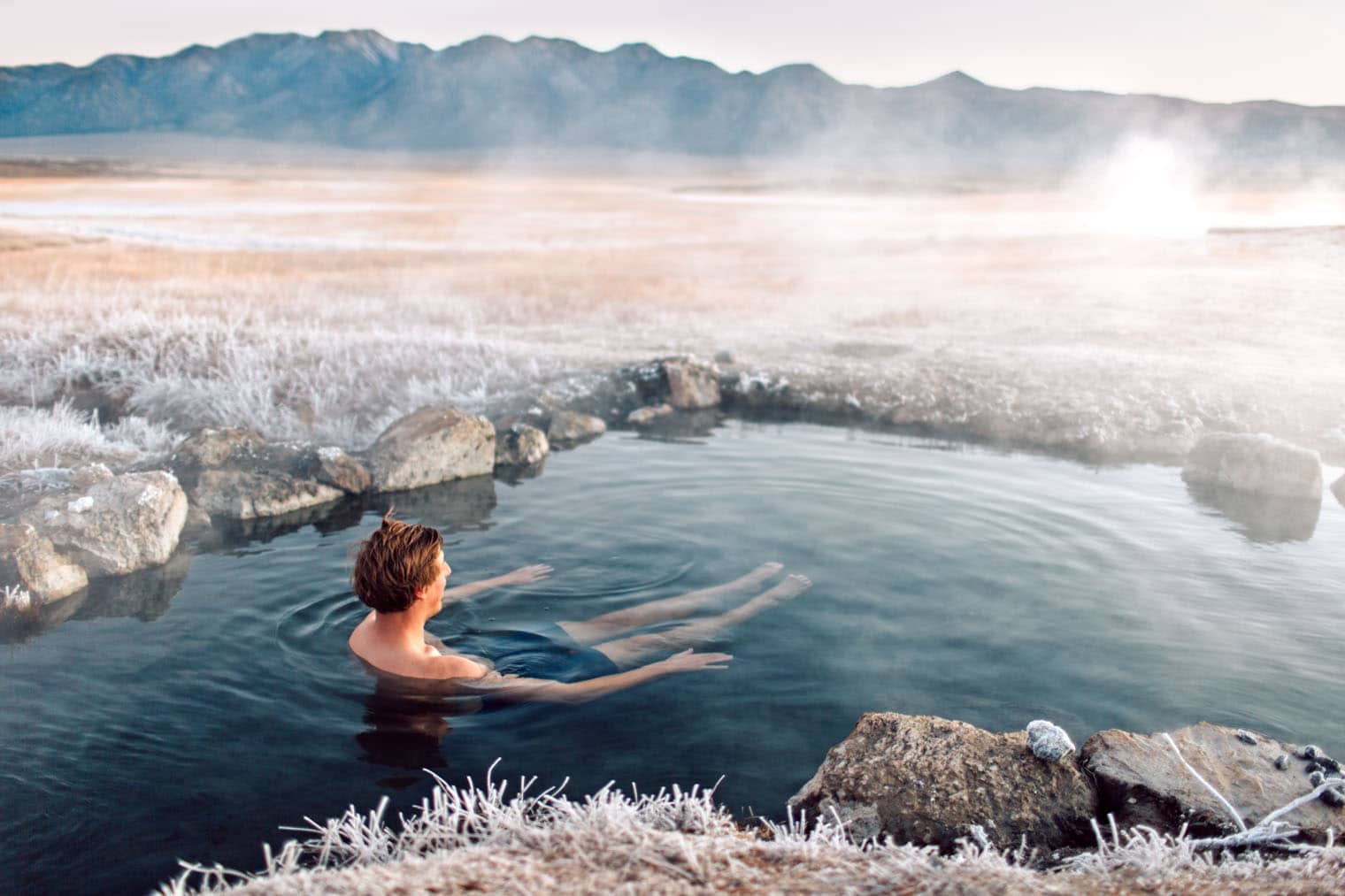 As we were leaving town for our flight back, the town of Mammoth Lakes has a sign with a quote from John Muir that reads: “Going to the mountains is going home”. After spending so much of this winter in the rainy, soggy gray, it was great to get back to the rarified air of the mountains. Many people spend their whole lives suffering through winter, dreading its arrival and enduring its presence, but in a town like Mammoth Lakes, where the season is fully and vigorously embraced, winter can be an exhilarating experience.

The other part of the sign read: See you again soon. So long as these great winter conditions hold up, we will definitely be heading back to Mammoth Lakes very soon indeed.

This post was written in collaboration with Mammoth Lakes and Travel Mindset. While we were compensated for our time & travel, all stories, photos, and opinions are our own. Thanks for supporting the partnerships that allow Fresh Off the Grid to continue running!