If you don’t think you’re the type of person who would enjoy rappelling down the side of a cliff, you’re in good company. Neither did we! While we definitely enjoy exploring a good slot canyon on foot, we never thought we’d have the ability or confidence to attempt a roped descent ourselves. 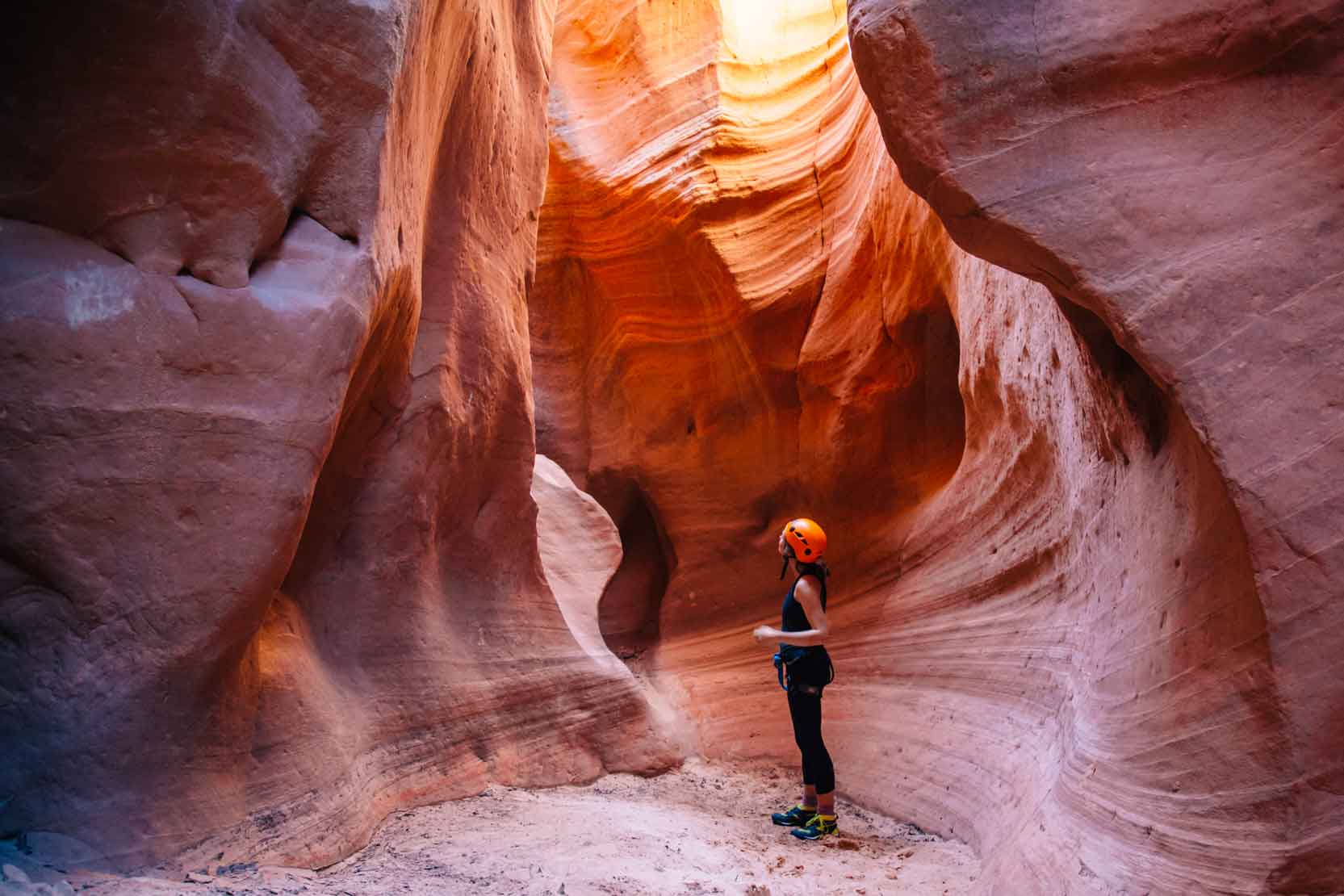 That’s why we were so stoked when Travel Mindset contacted us about working with the St. George tourism office. While there were a bunch of different activities planned, the main event was a guided canyoneering trip with the Zion Adventure Company. At the time, we didn’t know exactly what canyoneering entailed, but in typical Fresh Off the Grid fashion, we said “Yes” first and asked pertinent questions about whether we were going to die or not later.

In fact, it wasn’t until we arrived at Zion Adventure Company in Springdale, UT that we got the official explanation of what we would be doing. But as soon as we met our guides Chad and Brian, any fears we might of had were immediately put to rest. These guys were true professionals and quickly got to work familiarizing us with the basics of canyoneering. 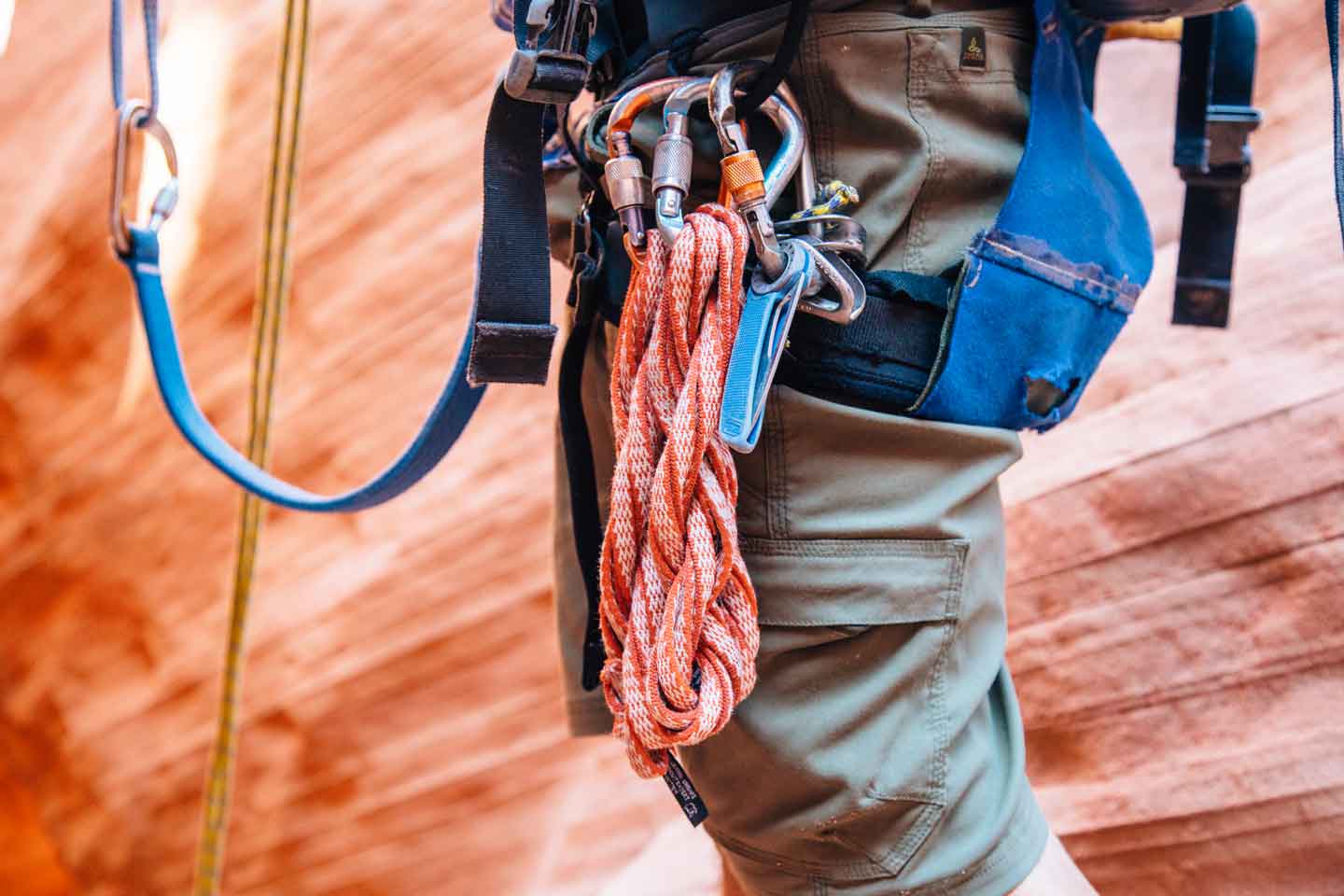 As it turns out, canyoneering is a combination of a lot of different skill sets, including hiking, rock scrambling, down climbing, and most notably: roped rappels. While all of these different elements can be enjoyed on their own, the overall point of canyoneering is to access places that would otherwise be completely inaccessible by foot.

For our trip we were going to be exploring the slot canyon known as The Huntress, located just outside of Zion National Park. While other canyons in the area had much bigger rappels, this canyon was known for being one of the more picturesque. And since neither one of us were hellbent on starting off on “Expert Mode,” that was fine by us. 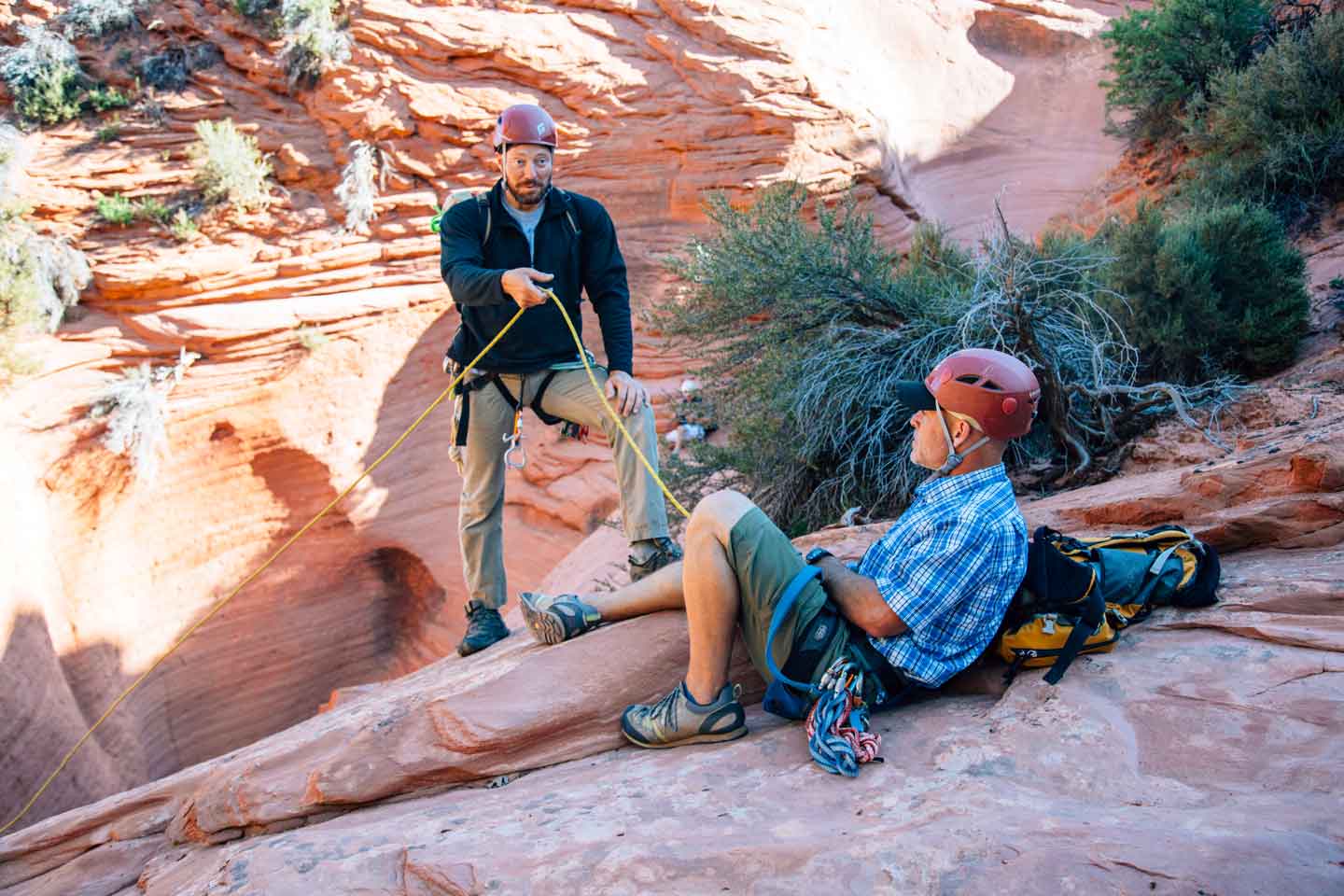 A drive through Zion National Park and short hike down got us into position for our first rappel. Chad and Brian walked us through the equipment, showed us how it worked, and explained the whole process from start to finish. For our initial descent into the canyon, we were going to be rappelling off a human anchor. Brian reclined himself behind a rock and made himself comfortable.

Michael stepped into position, attached his harness, and performed the most difficult task we had to do all day – which was to trust the equipment and our guides – and lean back over the edge. This was accomplished with a minimal amount of dawdling and whining. Which, for somebody who is freaked out by hights, was pretty good! 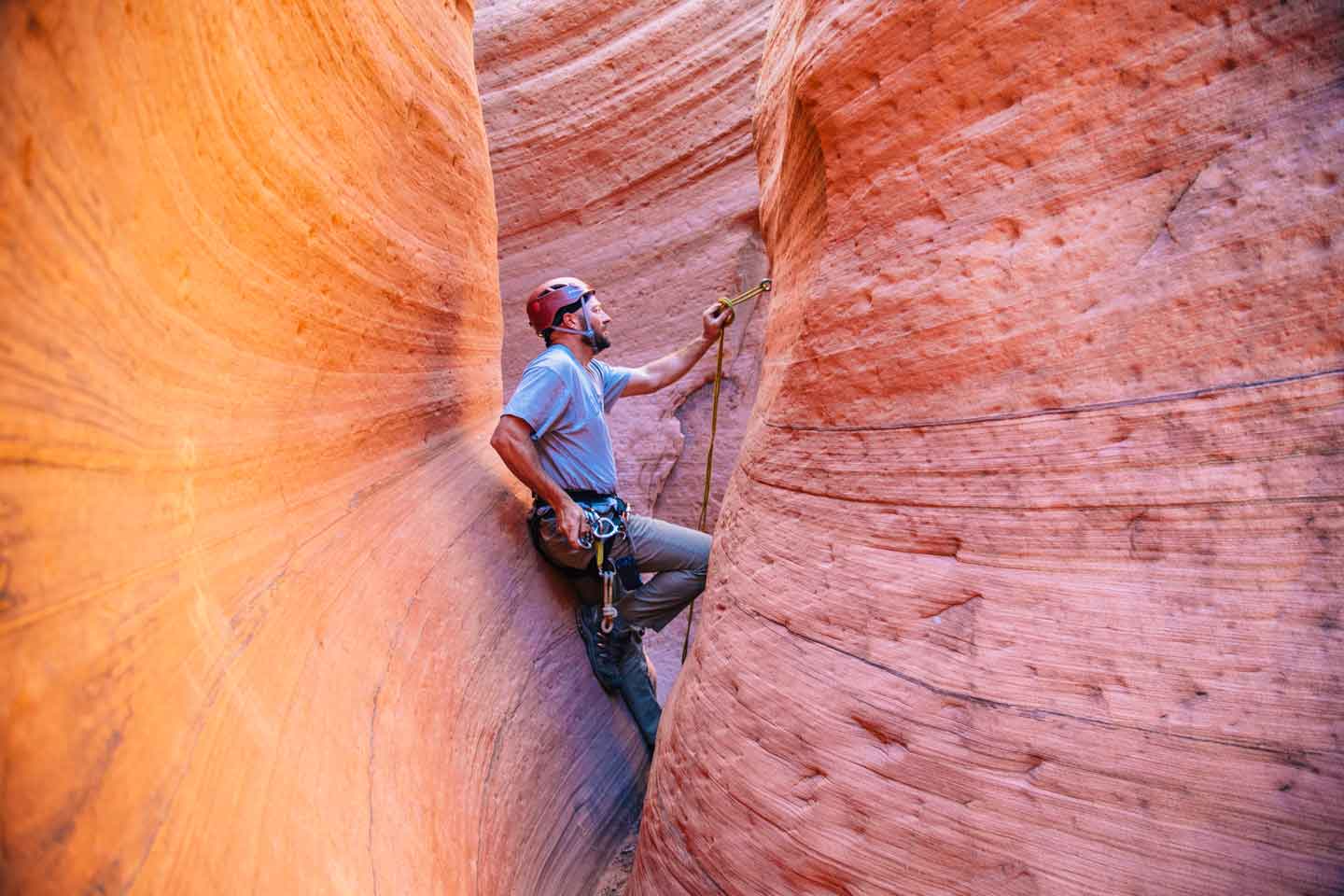 But, all it took was that first rappel before we were hooked. It’s amazing how terrified you can be of something you’re unfamiliar with, but once you have the opportunity to experience it, the fear just evaporates. Now that we had descended into the canyon itself, the fun stuff really began.

Not all of canyoneering is rapeling. As we continued down the canyon, we scrambled over debris, squeezed through narrow cracks in the rocks, and shimmied down long chutes. The Zion Adventure Company had outfitted us with special canyoneering shoes by Five Ten. We thought our Merrell hiking boots had grippy soles, but these shoes allowed us crawl around on the rocks like Spiderman. After we remarked how impressed we were with the shoes’ performance, Chad said, “Good, we helped Five Ten design them.” 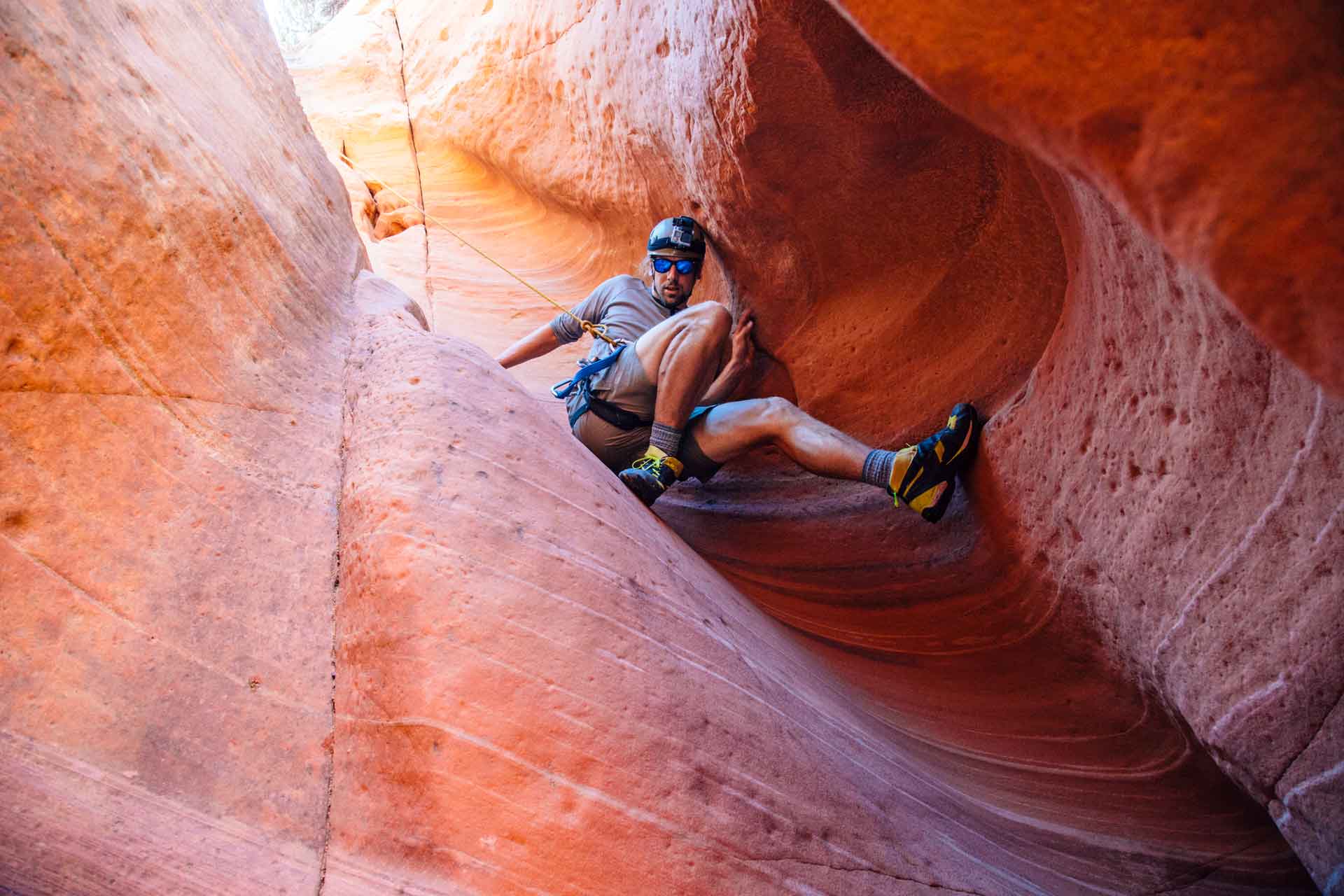 After a couple more rappels, we were really getting in the groove of things. With each new twist and turn, we were struck by the canyon’s awe-inspiring beauty. We could have never experienced a place like this on our own and we were completely grateful for the opportunity to join on this trip.

As we approached the bottom of The Huntress, we could sense the end was near, so we lingered a little longer to soak up the surroundings. But after a snapping our last couple of photos, we emerged back into the sunlight and began our mostly uphill hike back to the Jeep. 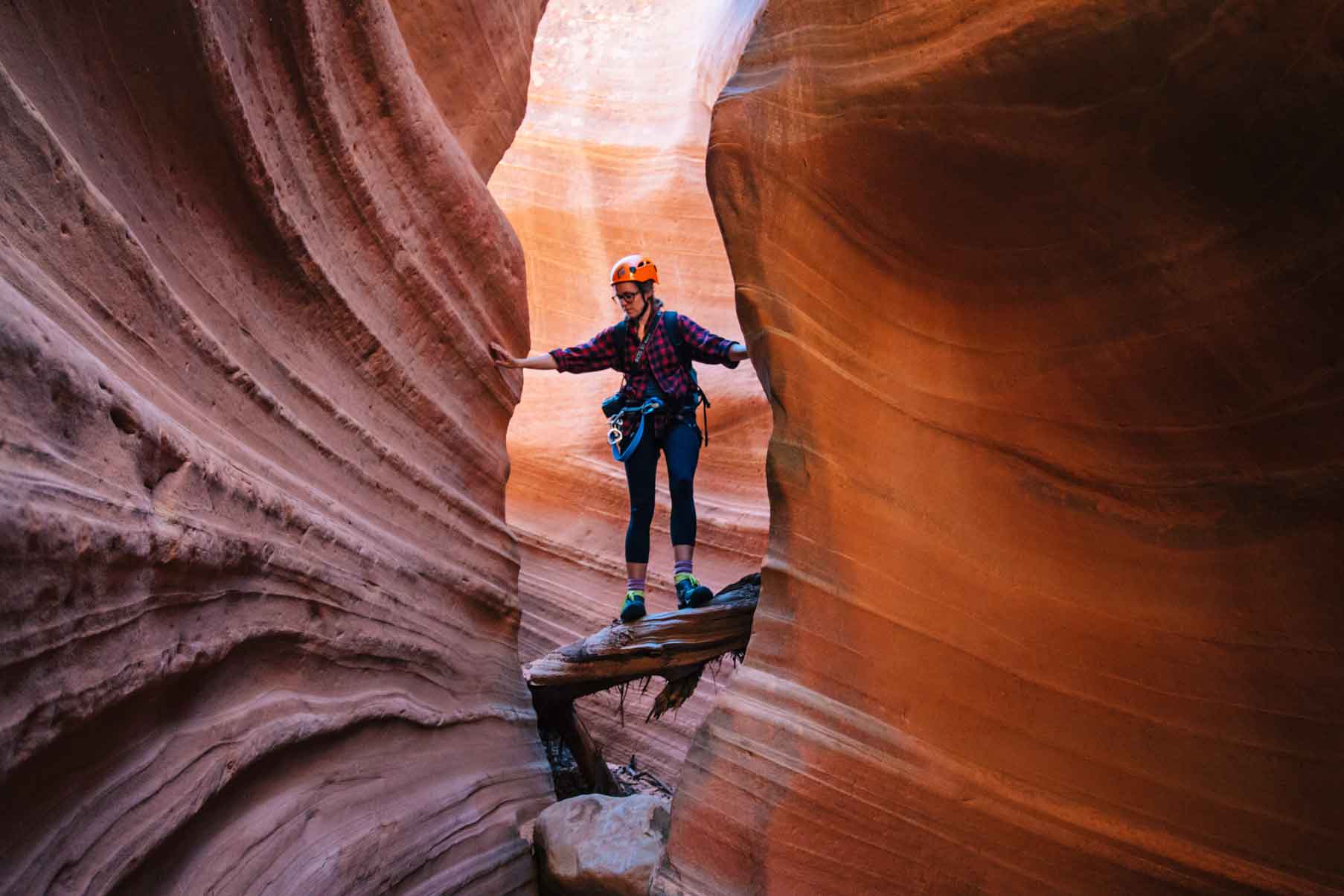 If we had been visiting the area on our own, we’re not sure if we would have signed up for canyoneering. The fear of trying something unfamiliar would have stood in our way. But we’ve never been so thankful for pushing ourselves out of our comfort zone. Sometimes trying something new can be the difference between just having a good time and creating an experience that will stick with you for years. That’s certainly how we felt at the end of it.

While we were unsure about canyoneering at first, now we absolutely can’t wait to get back out there again!

If you’re interested in going canyoneering during your stay in Zion National Park, we would definitely recommend heading over to Zion Adventure Company.  Whether you’re looking for guided tours or gear rentals, they’re your one stop shop to take your Zion experience to the next level. Big thanks to Travel Mindset & St. George for hooking us up with one of our most memorable Southern Utah experiences!

Looking for other activities while you’re in the Zion area? Check out these lesser-known Zion hikes, hike the Narrows, or check out some of the awesome outdoorsy things to do in St. George.