An eclectic mountain town at the base of massive dormant volcano, Mt. Shasta is one of our favorite places to visit in Northern California. 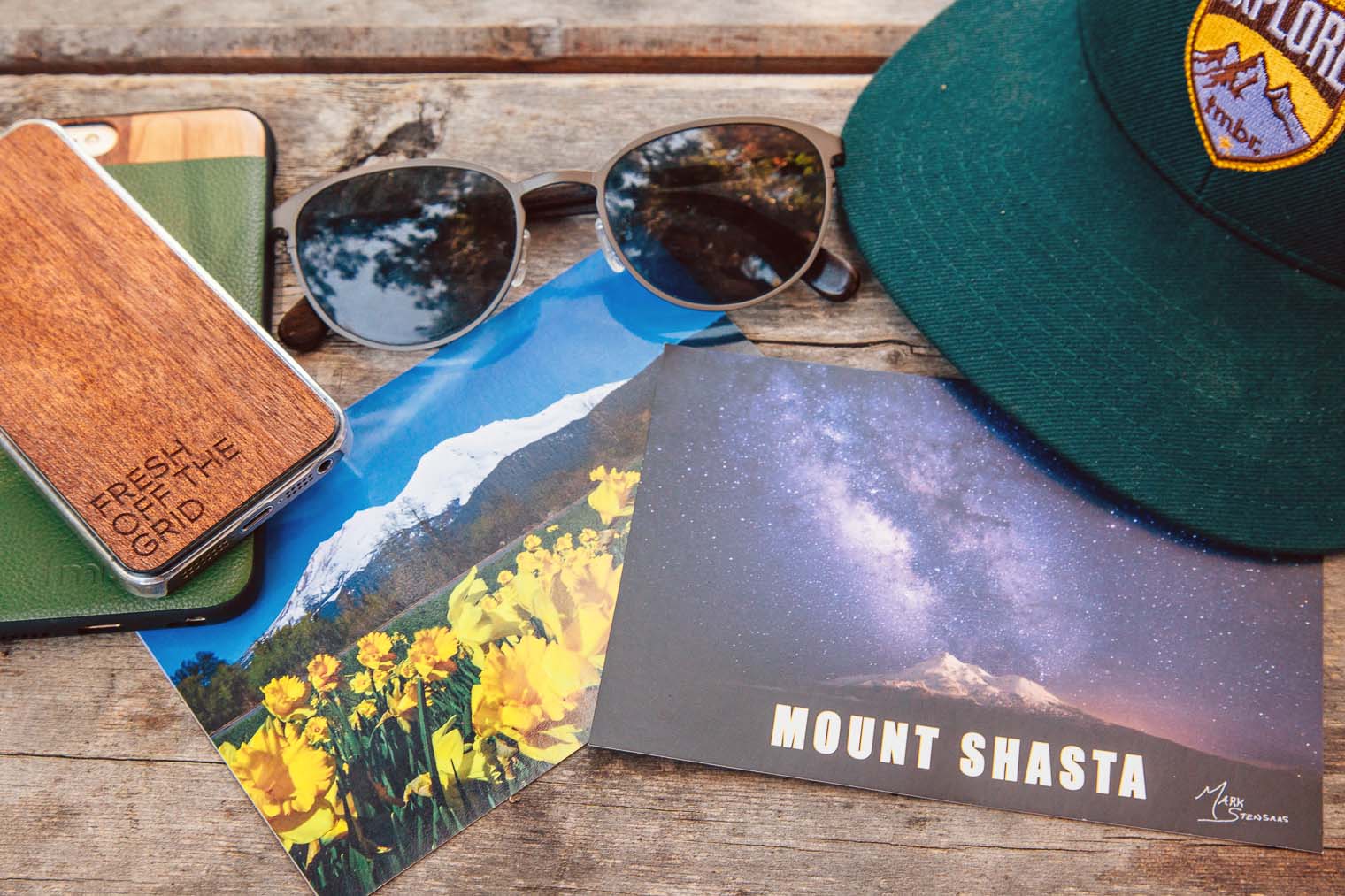 We fell in love with Mt. Shasta for two reasons. The first being its awesome natural beauty and limitless outdoor activities. Dramatic volcanic landscapes, charming mountain lakes, and enchanting waterfalls. We spent an entire week exploring the area and feel like we had barely scratched the surface. 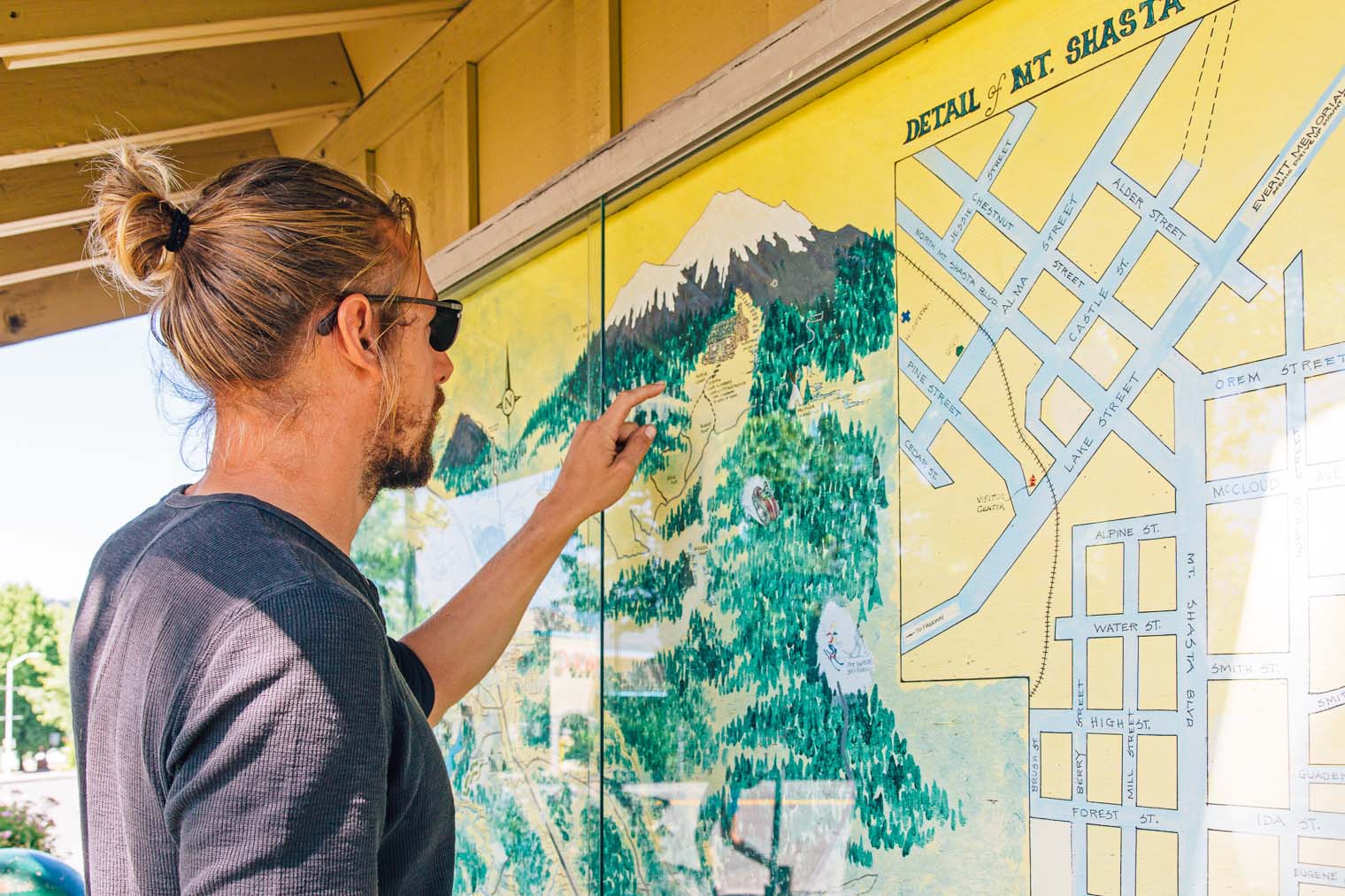 The second reason is the mystic charm of the local community. Rising precipitously from the surrounding landscape, Mt. Shasta has played a prominent role in local folklore for hundreds of years. Even today, many minor religions view the mountain as sacred and are drawn to it like a beacon. And for us, the free-form spiritual vibe we got felt in Mt. Shasta came as a welcomed change from the usual adventure sports one-upmanship we’ve experienced in many mountain towns.

Here are some of the places we visited during our nearly week-long stay in Mt. Shasta that we feel are definitely worth checking out. 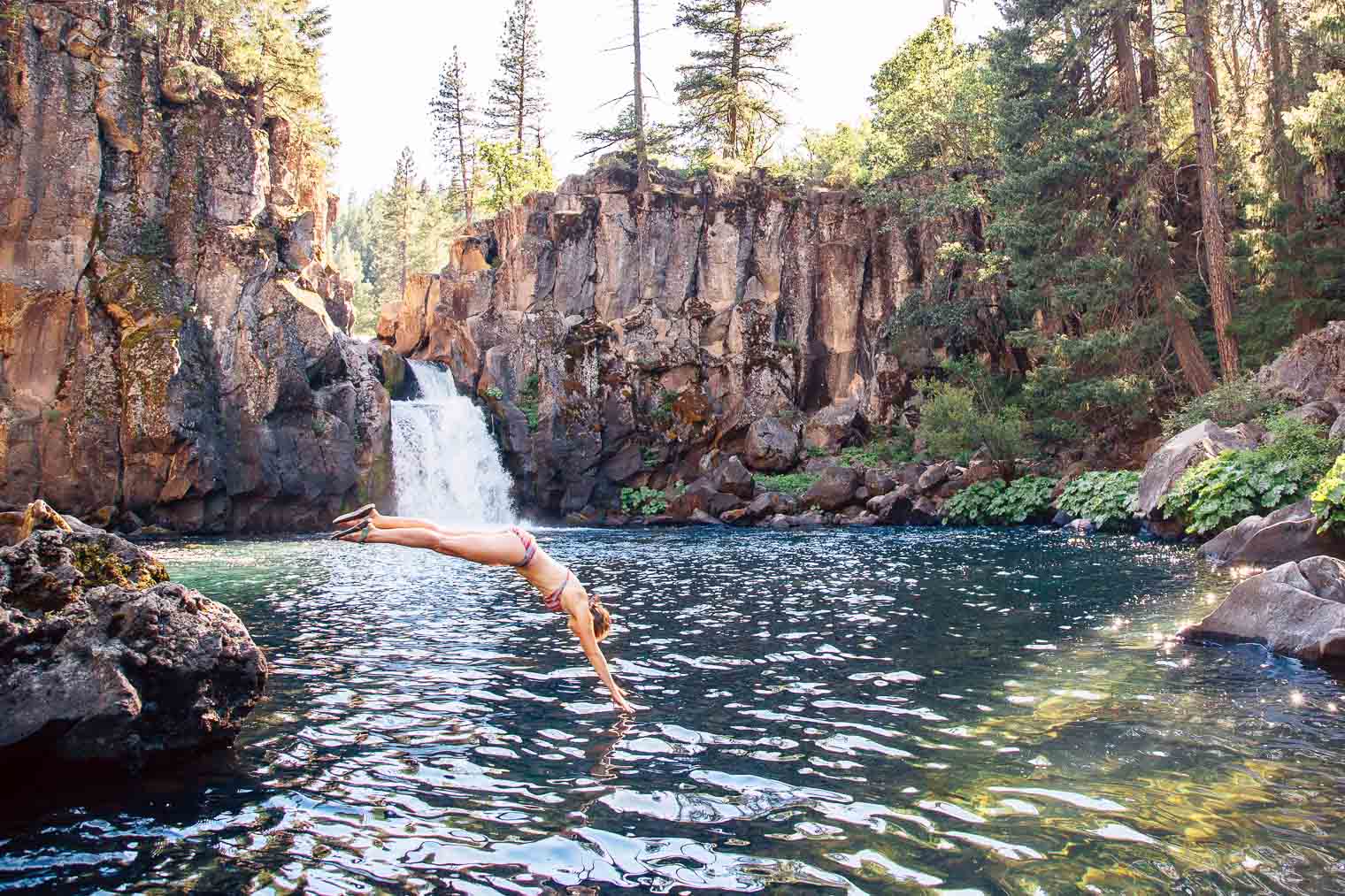 Just south of Mt. Shasta runs the McCloud River, which is one of Northern California’s most scenic waterways. The volcano feeds the river in more ways than one, with snowmelt rushing down off its slopes and geothermal spring water rising up from underground. Mt. Shasta may be inactive now, but deep gorges cut by the river reveal cooled lava flows and basalt columns from a fiery past.

A few miles to the east of the town of McCloud, along route 89, the river passes over a series of three spectacular waterfalls: Upper, Middle, and Lower Falls. There is a hiking trail that connects all three waterfalls, however, there is also a paved road that leads to an overlook at each one of the falls. 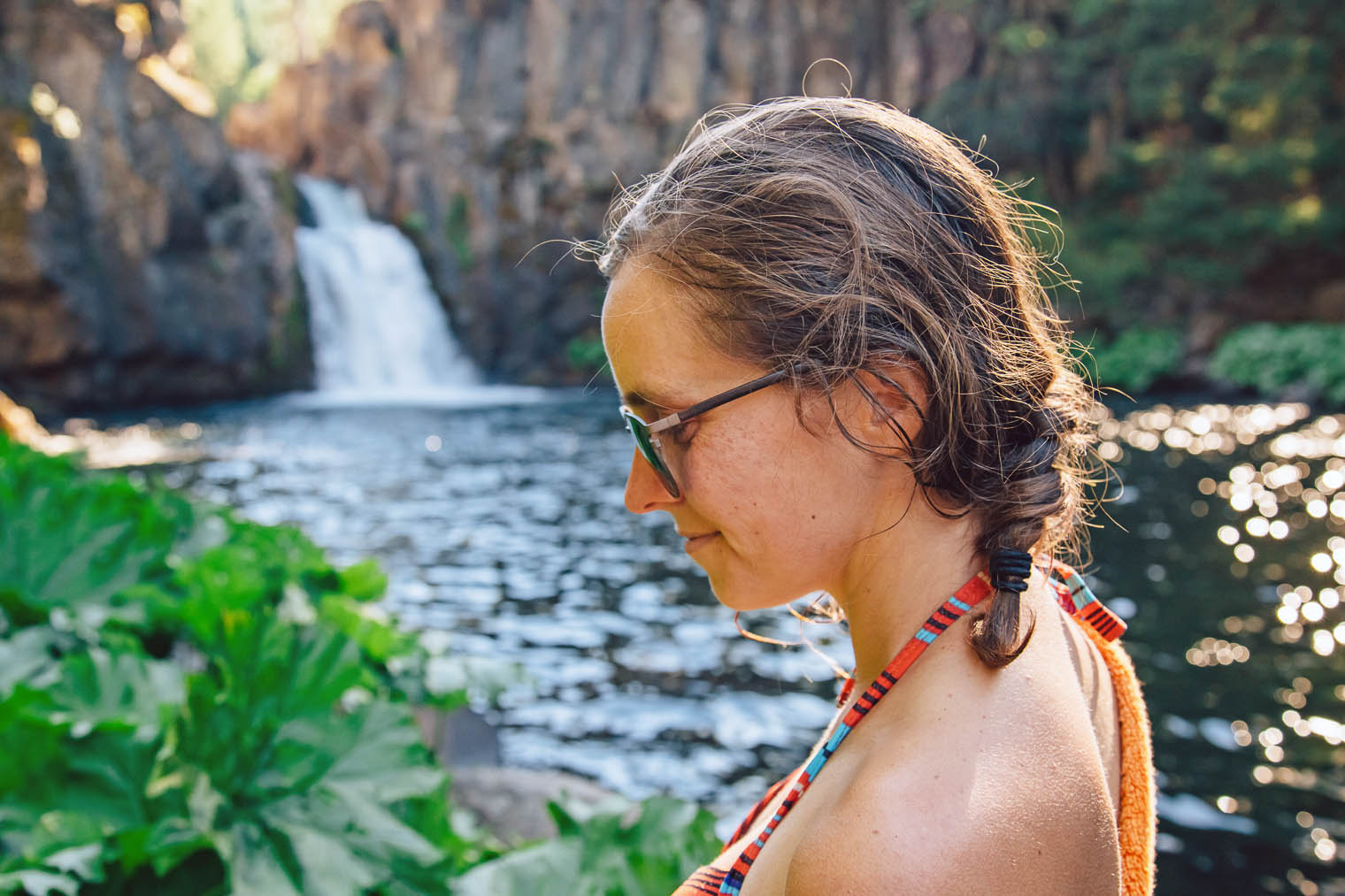 We saw lots of parents with children playing beneath the lower falls (the smallest of the three). There was a bunch of teenagers daring each other to jump off rocks beneath middle falls (the largest of the three). But there was nobody hanging out in the swimming hole beneath Upper Falls, which is where we decided to go.

From the main observation deck, we took a spur trail down to the bottom of the falls. There we were surrounded by lush ferns and vibrant green undergrowth. While the water was refreshing, it was by no means cold. We couldn’t resist jumping in. 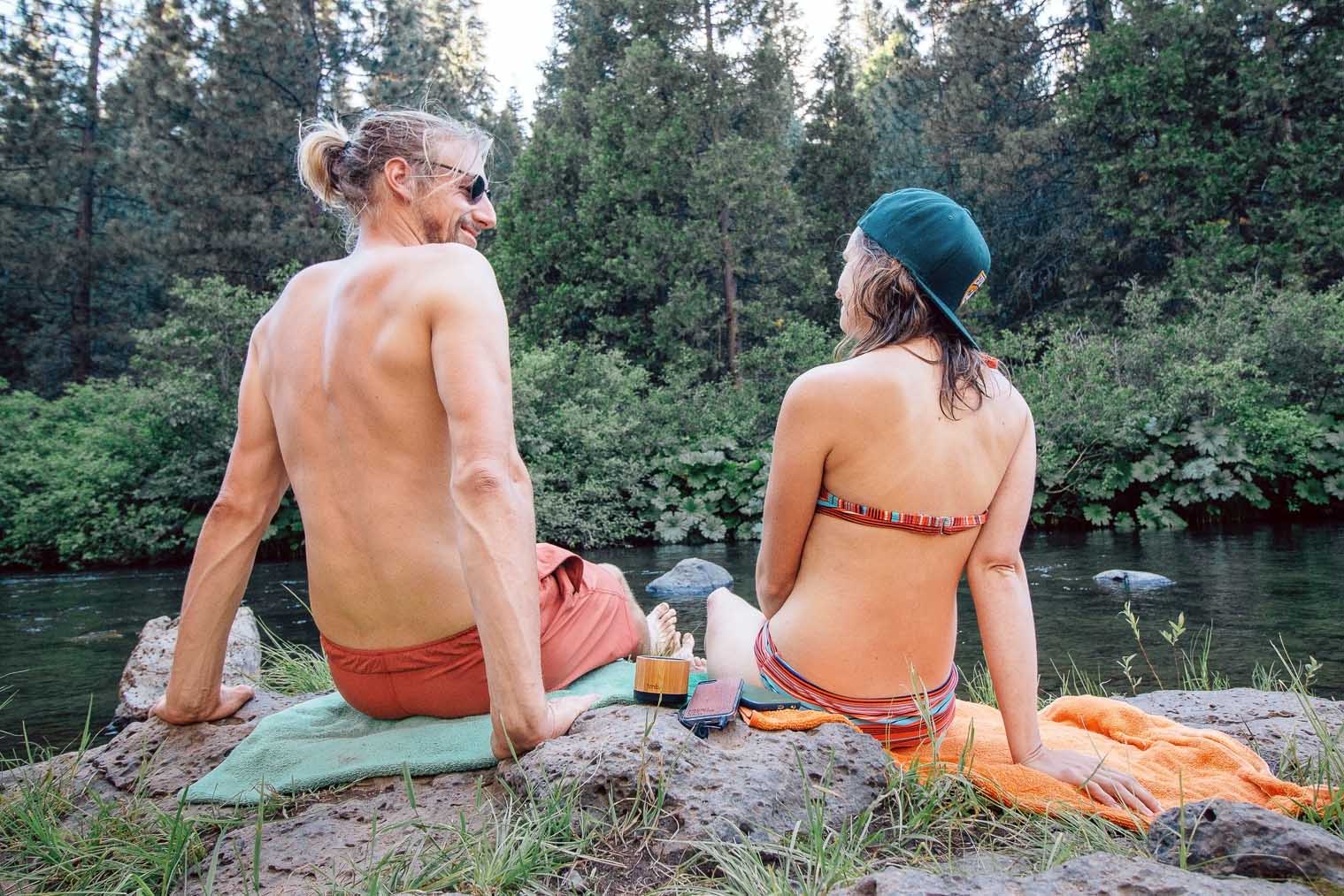 For more information about hiking to all three falls, check out this trail guide by Hike Mt. Shasta.

Outside the historic town of Dunsmuir, to the south of Mt. Shasta, you can find Hedge Falls.
While it is not particularly large or tall, Hedge Falls possess a certain beauty and grace. The water flows down in a single arching crest as it passes over a lip in the rock. Behind the falls, the cliffs have been eroded away, allowing you to walk fully behind them.

Due to their close proximity to the highway, these falls can get fairly crowded. However, this is vastly preferable to the alternative, because the original plans for the I-5 freeway actually called for the falls to be buried underneath it. Thankfully, local residents contested the plans and the highway’s developers were forced to move the route further west. The cost of relocating the freeway was roughly one million dollars, which is why the falls are sometime referred to as “The Million Dollar Waterfall”. 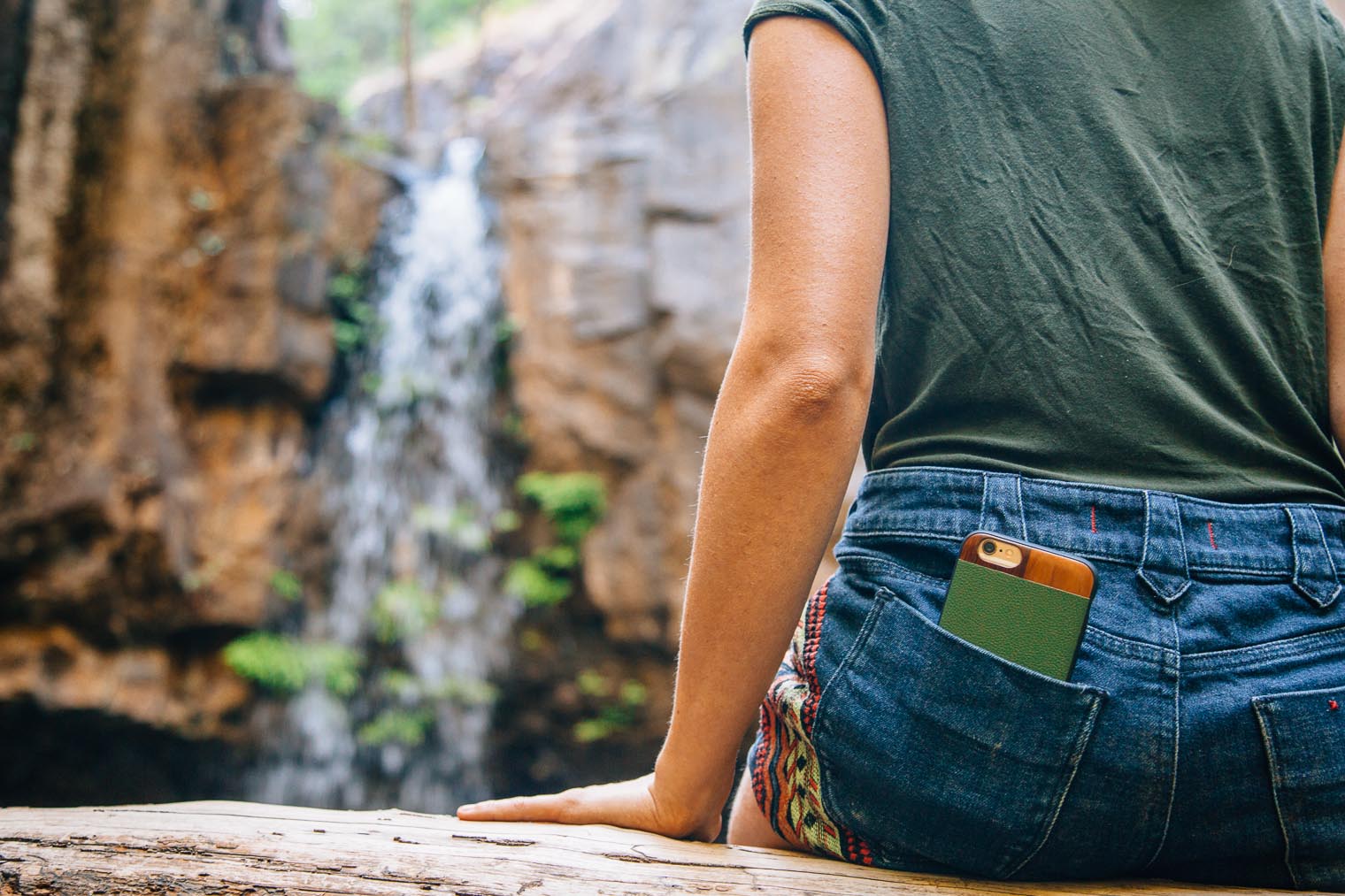 For more information about hiking to Hedge Falls, check out this trail guide by Hike Mt. Shasta. 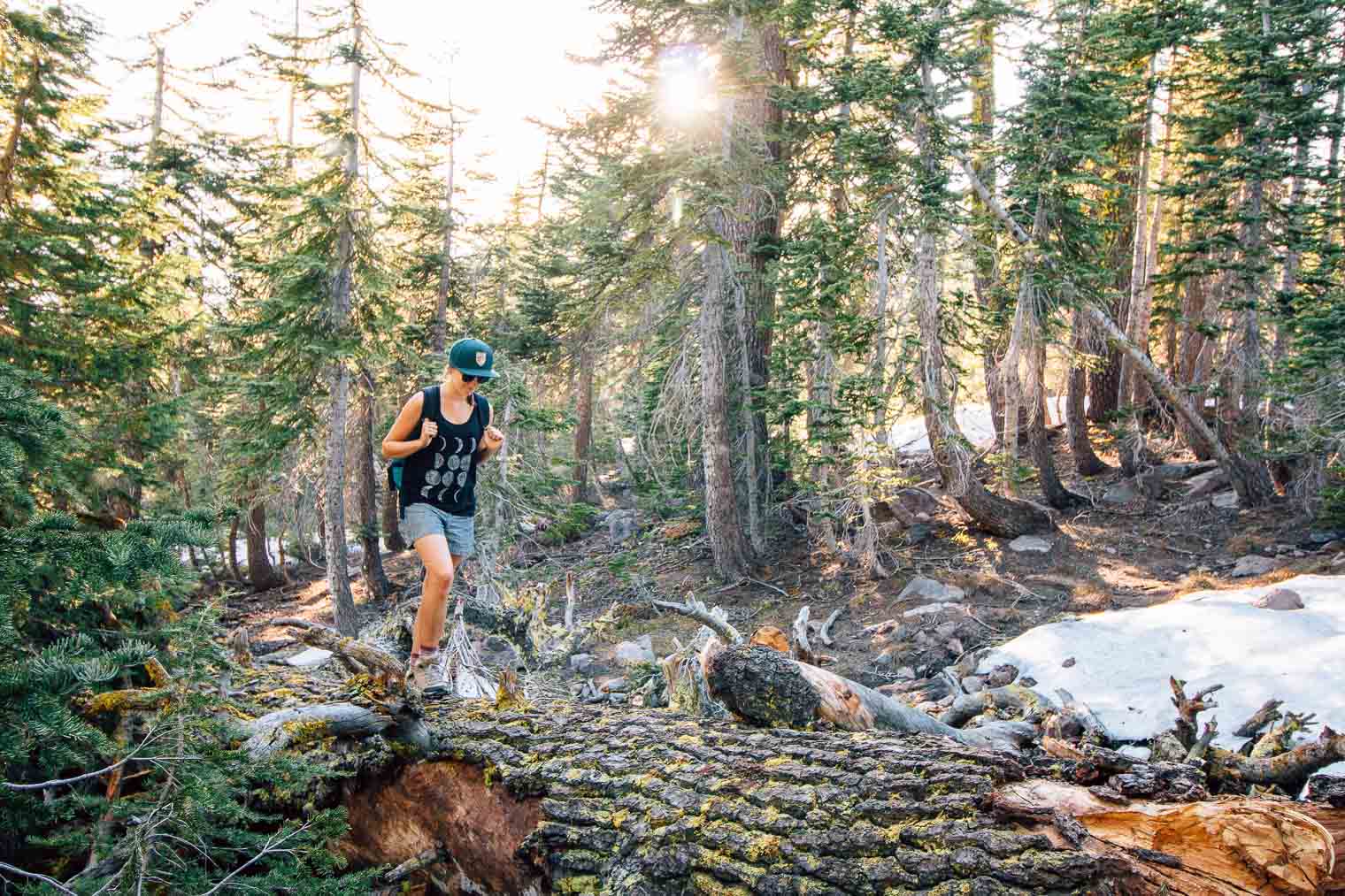 The highest you can drive up Mt. Shasta on a paved road is by taking Everett Memorial Highway. This scenic two-lane road twists and turns up the mountain before dead-ending near the treeline at 7,500 feet. Follow it all the way to it’s terminus and you will arrive at Panther Meadows. 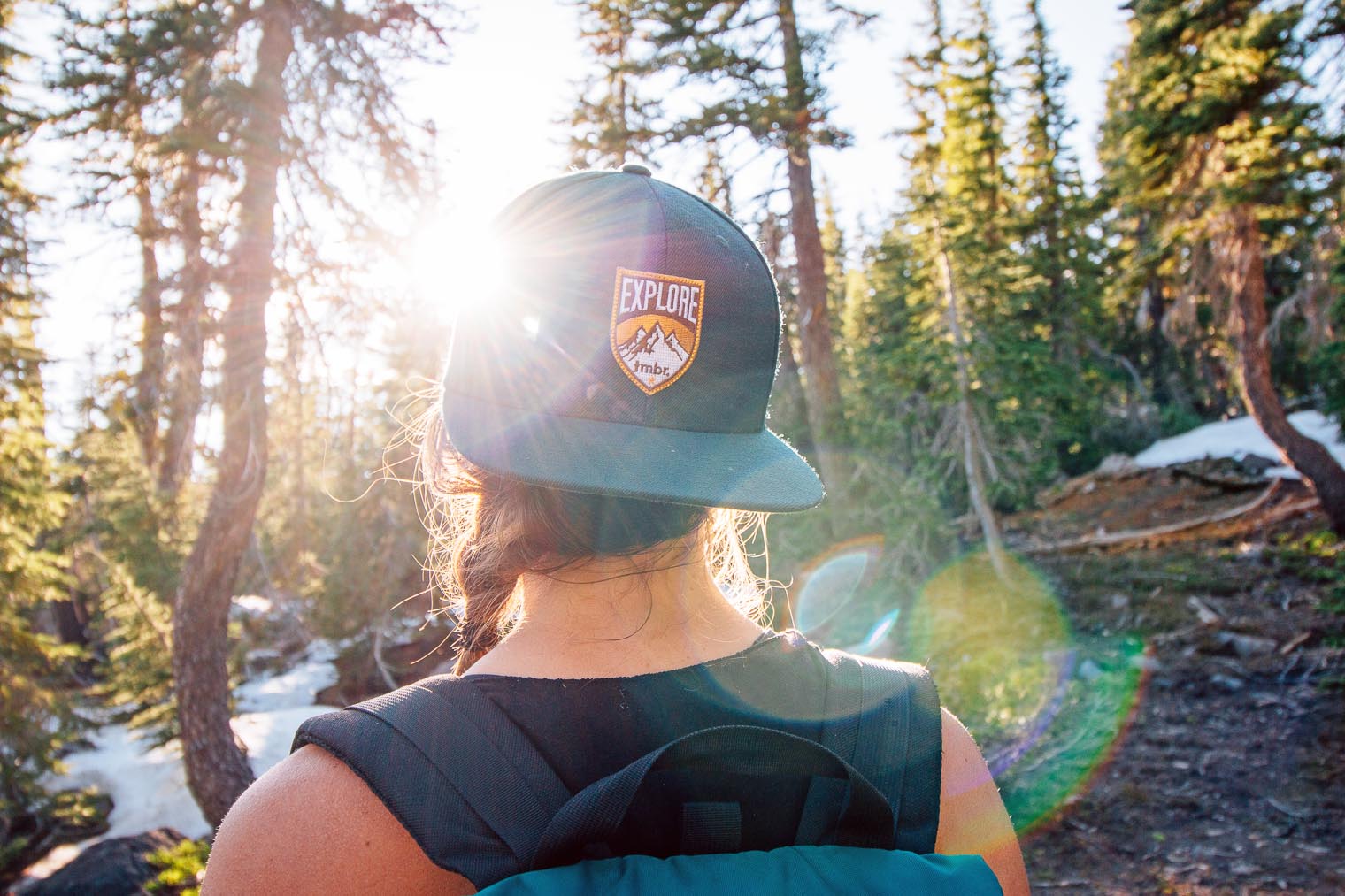 Covered under snow for much of the year, this fragile meadow briefly bursts to life from mid-July to November. Spring-fed streams trickle through the green grass and vibrant wildflowers to compose a picture of perfect alpine tranquility. There’s a small parking lot and walk-in campground next to Lower Panther Meadow, where you can pick up a short 1.4 mile trail that connects to Upper Panther Meadow. 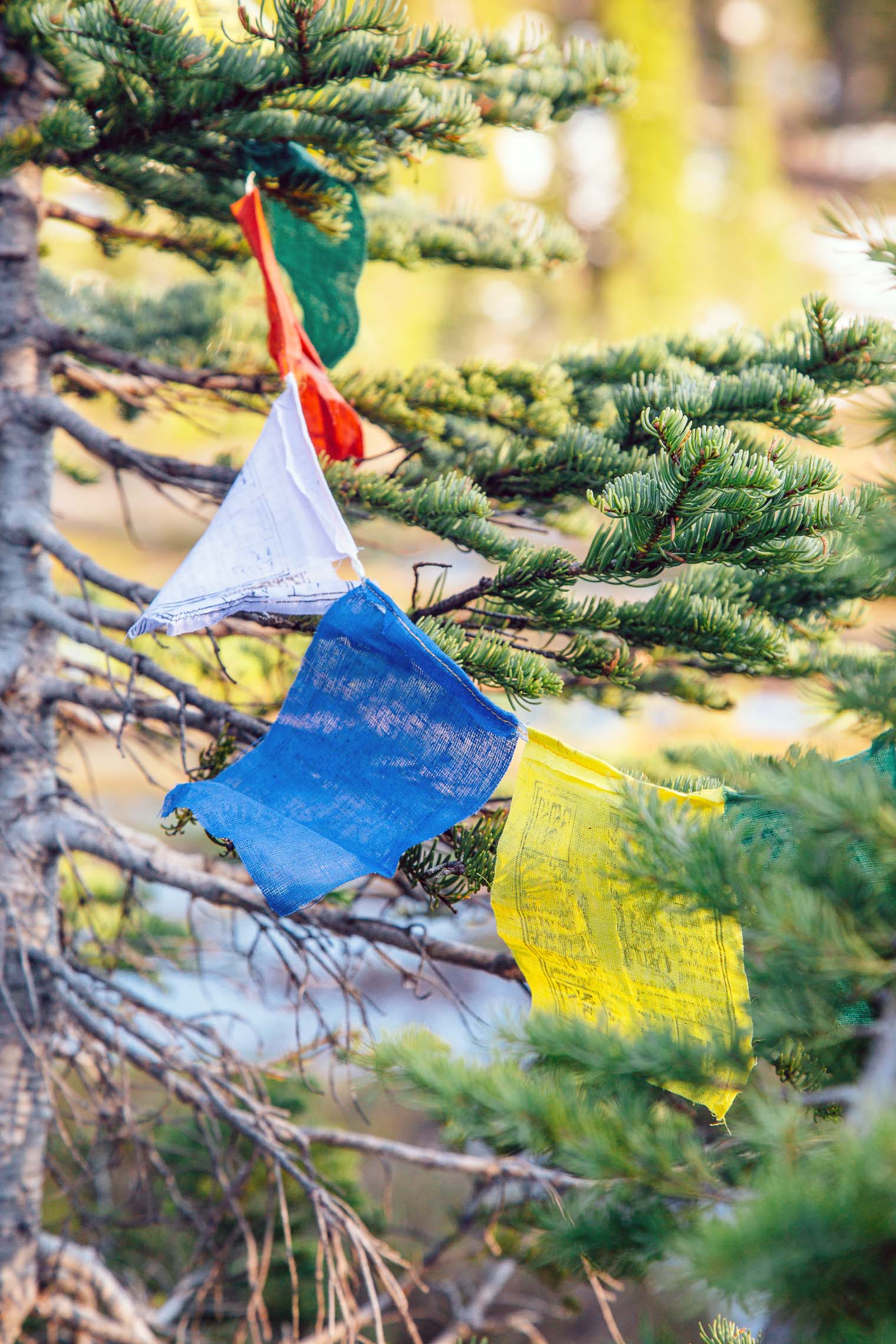 There are a number of minor religions based around Mt. Shasta (to find out more about them, read this article by Yonder Journal) and many of them consider Panther Meadows to be sacred. When we visited Panther Meadows last year, we saw individuals in white flowing robes meditating and walking silently through the trees. While we couldn’t understand exactly what was going us, a feeling of deep spirituality was definitely present.

Learn more about staying at Panther Meadow Campground here. Or check out this trail guide to on Hike Mt. Shasta to learn how to explore the area as a day hike. 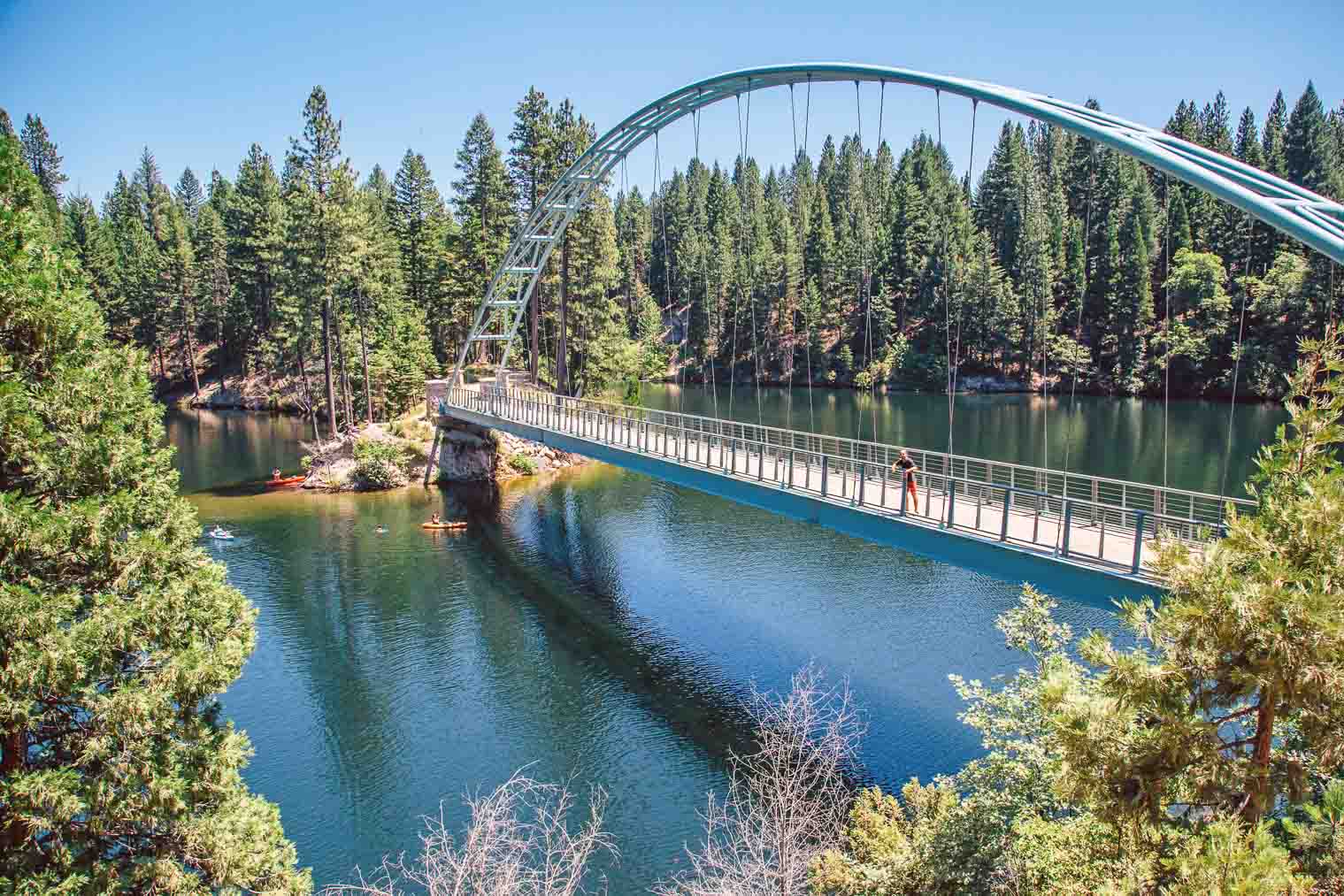 To the southwest of the town, you’ll find Lake Siskiyou – one of the prettiest reservoirs we’ve seen in all of California. While it’s southern shore has been built up by the Lake Siskiyou Resort, the northern shore remains relatively untouched.

While there is plenty of fishing, boating, and kayaking to be done at this lake, a great way experience it from the land is to walk the Lake Siskiyou loop trail. During the summer, when seasonal bridges are installed, the hike is 7 mile round trip.

If you don’t have time to do the full hike, we would definitely recommend checking out Wagon Creek Bridge. This massive foot bridge spans over one of the lake’s inlets and was the final piece to connect the entire Lake Siskiyou loop trail. The bridge is impressive enough on its own, but it’s even more spectacular to see it with Mt. Shasta behind it.

You can find out more about hiking the full Lake Siskiyou Loop, by checking out this trail guide by Hike Mt. Shasta. 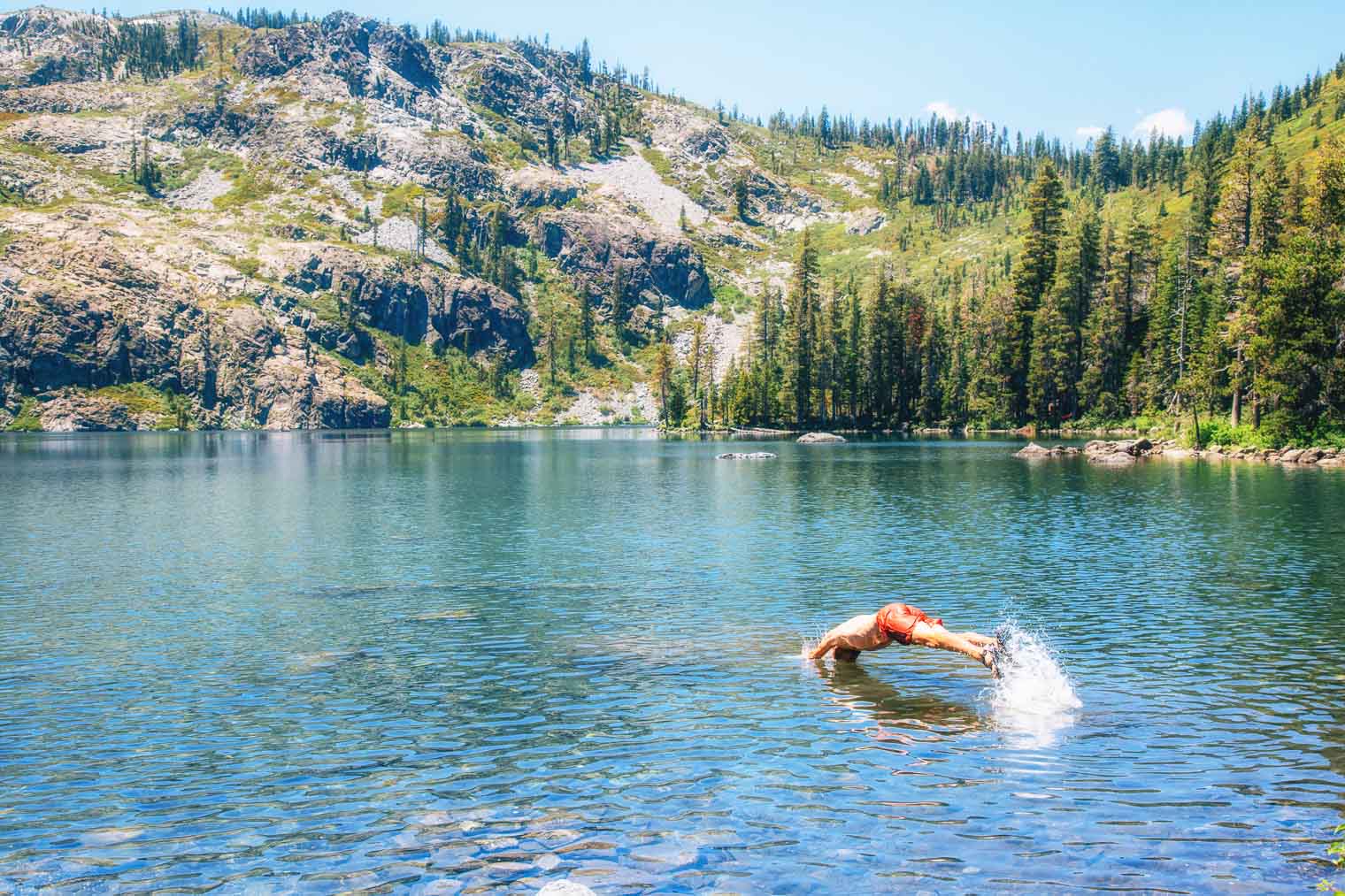 To the southwest of the Mt Shasta, above Lake Siskiyou, you’ll find the crystal clear waters of Castle Lake. This pristine mountain lake is at 5,440 feet of elevation and is backed with a headboard of rocky cliffs. While most lakes at this elevation are freezing cold, Castle Lake is fairly shallow in most parts – allowing its waters to warm rapidly during the summer.

It is a popular destination in the summer for swimmers, kayakers, and paddle boarders. In the middle of the lake, there is a moored swimming platform for those willing to make the swim. One the Southern end of the lake, there are a few prime spots to scramble up the rocks above the lake and jump in. There are trails leading along the eastern and western shores, allowing visitors to find their own secluded spots. 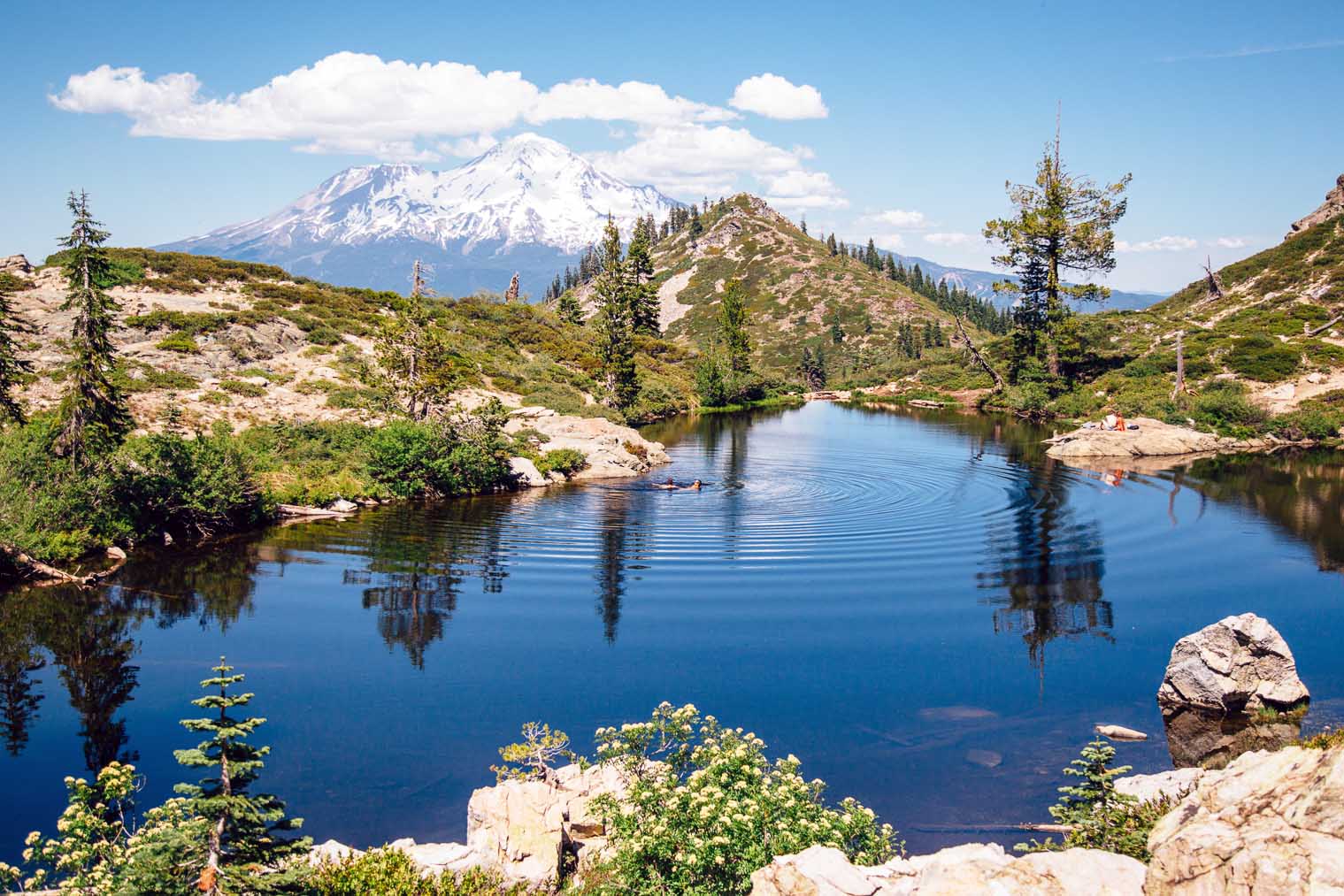 Due to Castle Lake’s close proximity, many people often overlook Heart Lake, but it is well worth the trek up. This small alpine lake is perched high up in the hills and offers stunning views of Mt. Shasta in the distance and Castle Lake below.

Because of its small size, Heart Lake warms up very quickly during the summer. Its water may not be clear as Castle Lake, but we can attest that it is just as refreshing. Especially after the short yet steep hike required to get up to it. 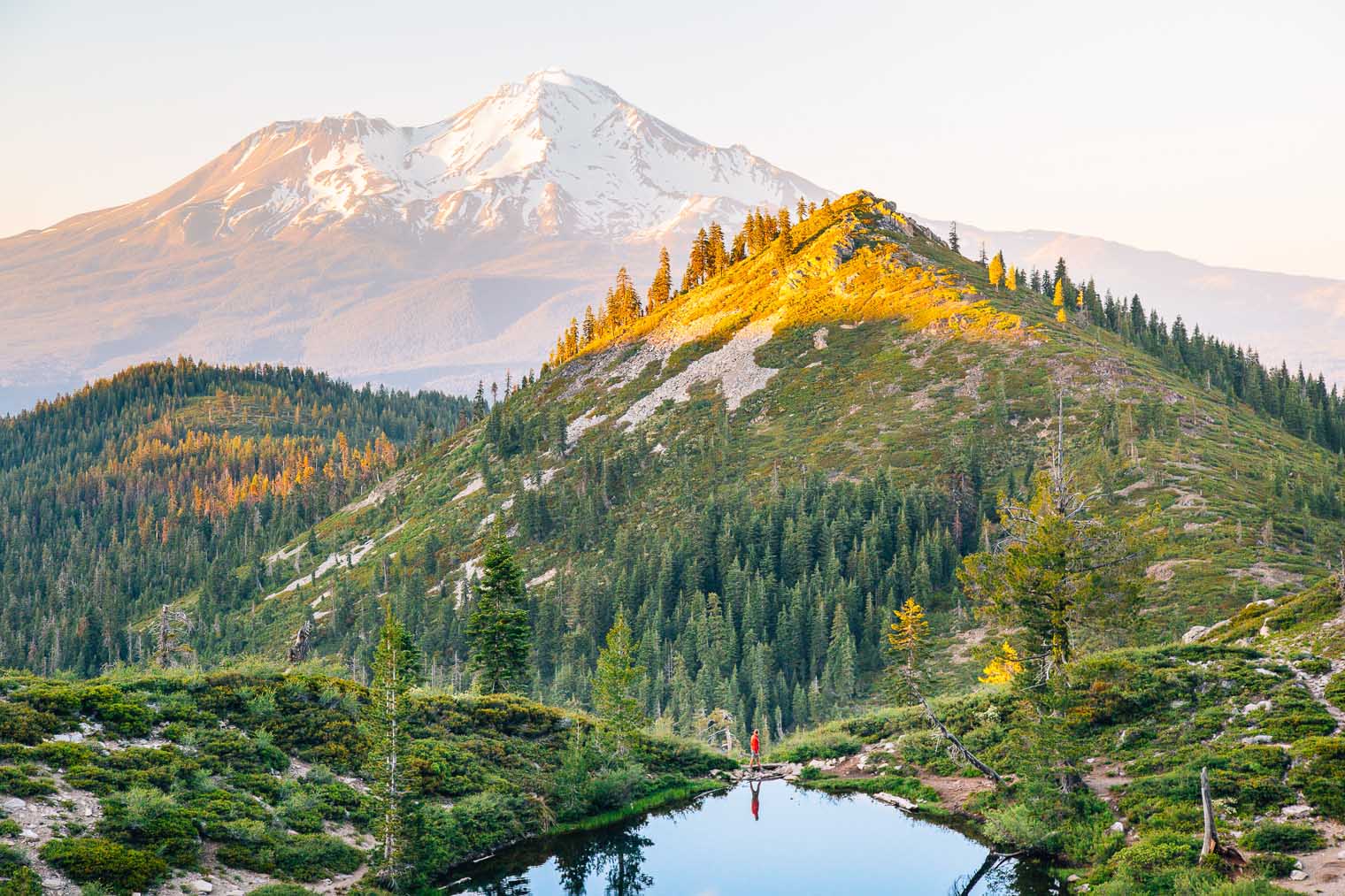 Most people hike you to Heart Lake as a day hike, but we decided to bring our backpacking gear along and spend the night up there. You can read more about our overnight trip up there  here. 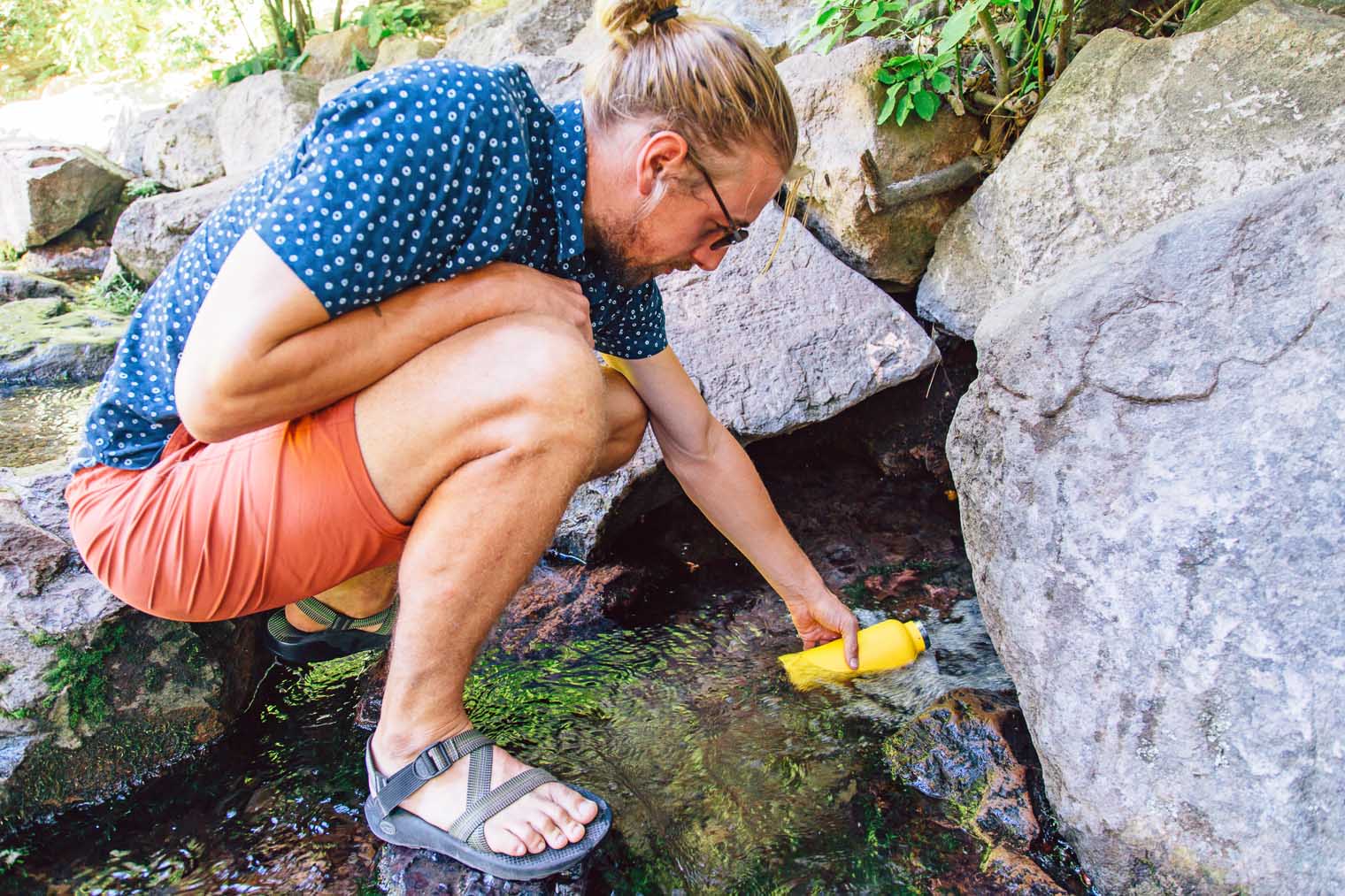 Finding the Headwaters at City Park

While a city park might not seem like an outdoor “destination” per se, there is definitely something unique going on at Mt. Shasta City Park that’s worth checking out.

On the western side of the park, spring water emerges from the ground to form the headwaters for the Sacramento River. This crystal clear and perpetually frigid water actually comes from snow that fell high up on the slopes of Mt. Shasta over fifty years ago. When the snow melted, the water passed through a series of underground caverns and lava tubes before finally emerging here.

While there is an official placard stating that the city has not approved of the water in the spring for drinking, there is usually a crowd of people filling up their water bottles and jugs. Like many things in Mt. Shasta, the water from this spring has a definite spiritual significance and people travel from all over just to drink from it.

Following suit, we filled up our water jug and water bottles. The water tasted incredibly clean and pure, without any sort of aftertaste to it. Furthermore, we didn’t get sick or die. However, that was just our experience. 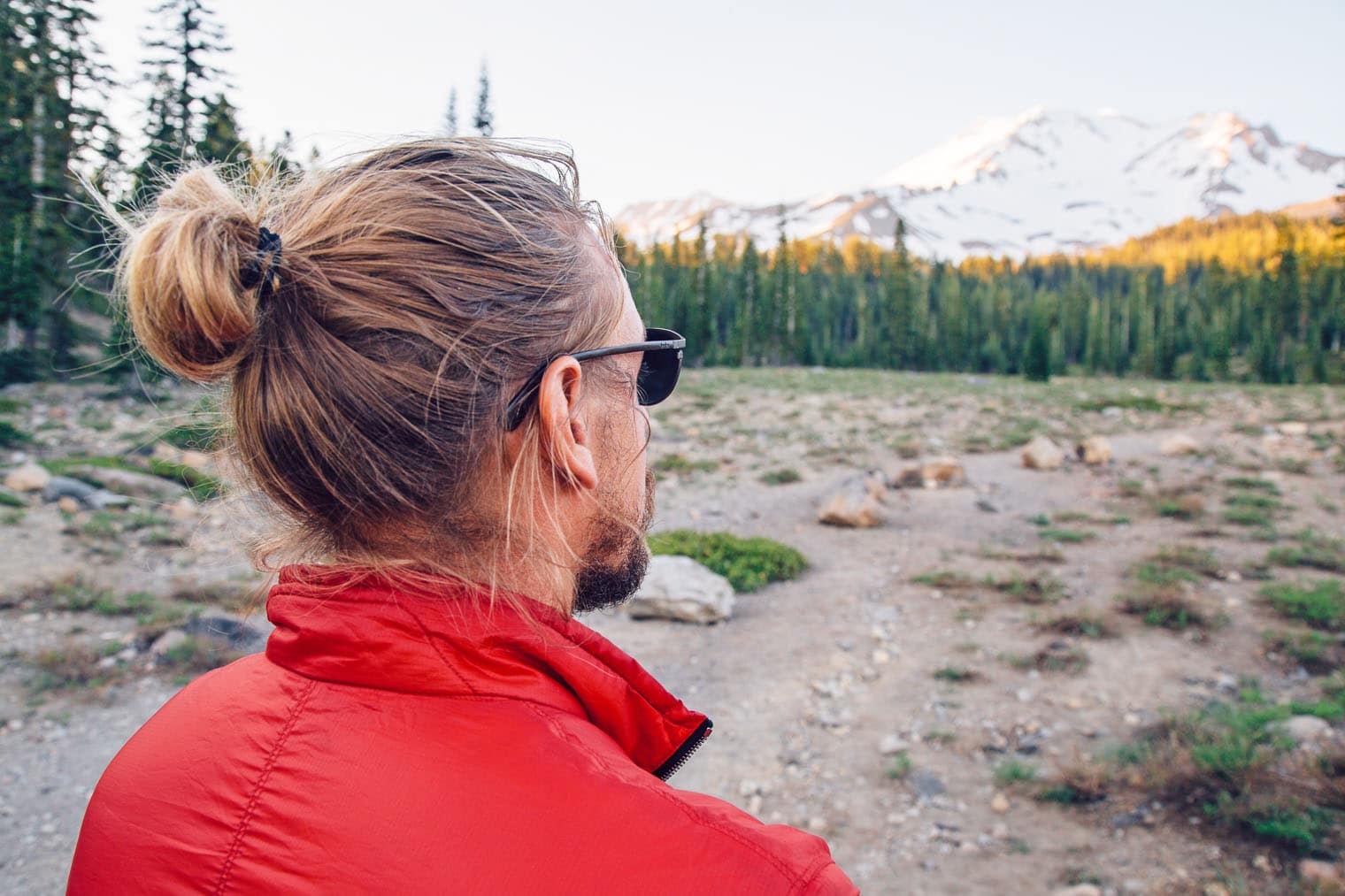 It is easy to see why people from all over are drawn to Mt. Shasta. The raw natural beauty of the landscape is only elevated by the distinct character of the town. While we only spend a week here, we could easily imagine spending the entire summer exploring this enchanting part of Northern California. You know, perhaps someday the mountain will call us back. 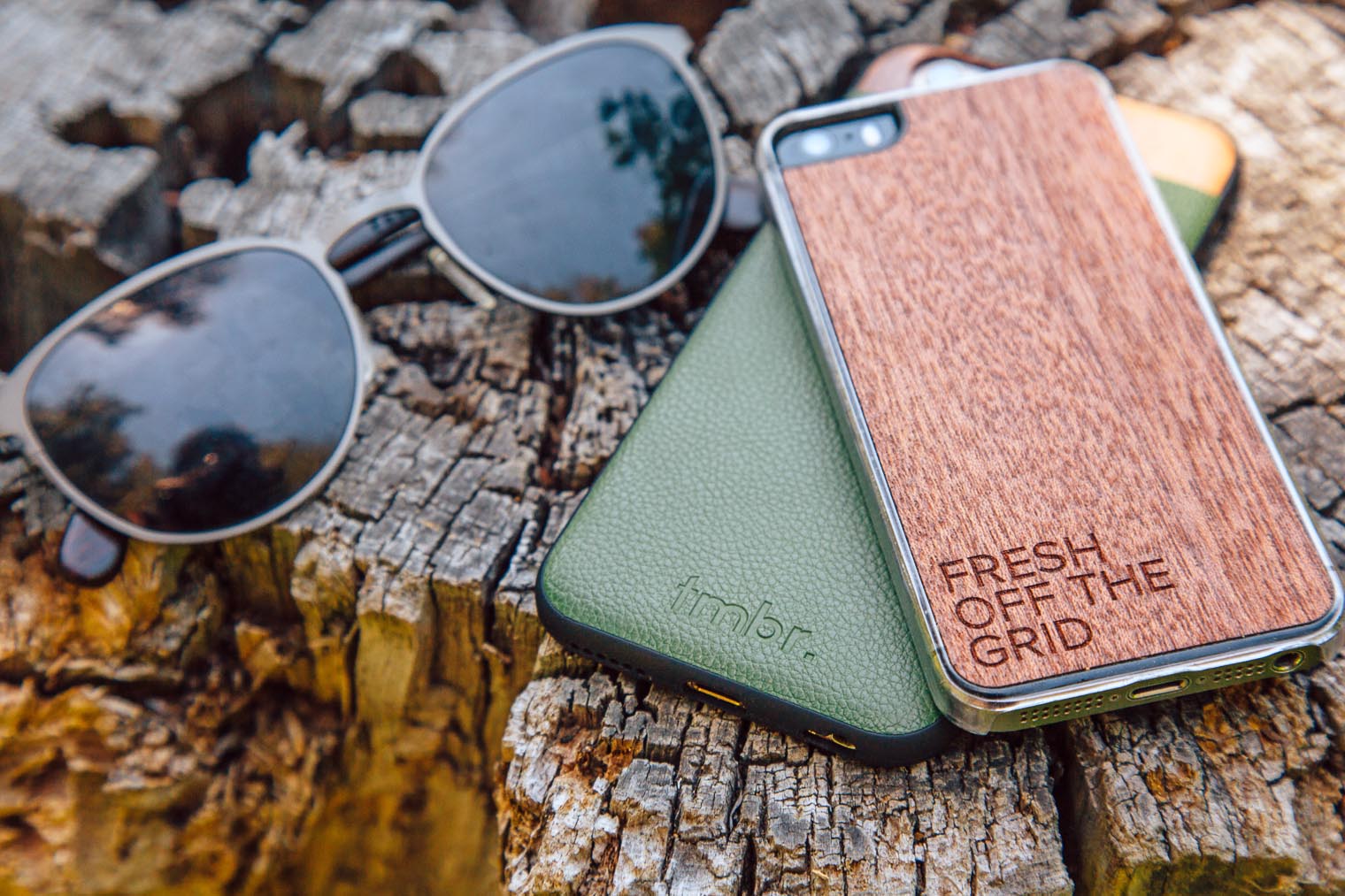 This post about our exploration of Mt. Shasta was underwritten by Tmbr. They sent us some awesome sunglasses, personalized phone cases, snapback hat, and bluetooth speaker at no cost and contributed a little to the Fresh Off the Grid trip fund. You can find out more about them and their handcrafted goods at tmbrs.com. Thanks for the support!