Fall camping season starts after Labor Day and goes until Thanksgiving, which just so happens to coincide with Pumpkin Spiced Everything Season! So what better way to embrace the flavor of fall during your late-season camping trip than with some pumpkin-y goodness!

We’ll be the first to admit that the pumpkin spice mania can get a little out of hand, but when autumn hits we can’t help but find ourselves wanting something with *a little* pumpkin spice.

In terms of camping breakfasts, French Toast is a great candidate to be Pumpkin Spice-ified. After all, French Toast mostly serves as a vessel to transport other delicious flavors like maple syrup and melted butter to your mouth. So why not add in a little pumpkin spice to the party?

So this fall camping season, if you’re looking to celebrate the season and you’re not afraid to jump on the pumpkin train, then give this Pumpkin French Toast a try.

Why We Love It

One of our gripes about making French toast in a standard round skillet is that you can usually only fit 2 slices in the pan at a time—which means it takes longer to get breakfast on the table and the first slices are usually cold.

We were so excited to find the GSI Bugaboo Square Frypan because it easily fits 4 slices at a time! This skillet let us crank out breakfast much quicker.

How to Make Pumpkin French Toast

The process for making Pumpkin French Toast is very similar to making standard French toast, but with a few additional ingredients.

As mentioned above, you’ll want to use thick-sliced bread. Either Brioche slices, Texas Toast, or a loaf of bread you slice yourself. Slightly stale bread is actually perfect because it keeps its structure better after being soaked.

Next, you will want to make the batter. You can make this up to two days ahead of time at home and transport it with you in a cooler. This will speed up breakfast and cut down on individual ingredients that need to be transported. Or, the batter can be simply made at the campsite in the morning.

First, whisk the eggs with a fork until completely smooth. There should be no unblended spots of egg whites. This is easier to do with just the eggs in the bowl, rather than after you add the milk.

Once the eggs are properly blended, next add the milk, pumpkin spice, sugar, and salt.  Whisk thoroughly until the milk is incorporated and the sugar and salt dissolve.

Now it’s time for the pumpkin-fication! The first step is to whisk in some pumpkin puree. This mashed-up pumpkin adheres really well to the bread when soaking and actually toasts up quite nicely.

There is some magic alchemy going on with pumpkin spice. There’s no actual “pumpkin” in it, but somehow the combination of cinnamon, ginger, lemon peel, nutmeg, cloves, and cardamom produce a flavor that is – without question – the taste of pumpkin. Definitely a spice blend that is greater than the sum of its parts.

Now with your bread sliced and batter ready, you are ready to begin!

Start by preheating your skillet over medium-high heat. Add a small pad of butter and evenly coat the skillet as it melts.

How long you soak your bread in the batter will depend on its thickness and how custardy you want the inside to be. We have found that for thick-sliced bread like Texas Toast and Brioche slices, soaking the bread for 10 seconds on either side gives us a nicely toasted exterior with a slightly custardy interior.

After soaking on both sides, place the toast in the skillet. The batter should sizzle a little bit in the butter. If it doesn’t, then the pan wasn’t warm enough and you should adjust your heat a little higher.

Depending on the heat of your stove and your own desired toastiness, it’s hard to give an exact time for when to flip. Your best bet is to check frequently by lifting up an edge and taking a peek.

Once your toast is looking good to you, flip and standby. The second side will take half as much time to toast as the first. So be on the ready!

↠ Thick-cut bread is the secret to great French toast. It soaks up the milk-egg mixture well and allows you to develop a bit of a crust on the outside while maintaining some of the custard-like interior. We used Trader Joe’s brioche for this recipe, but Texas toast also works well. Or, you could buy a loaf of bread and cut it into ¾”-1” slices.

↠ To cut down on steps at camp, you can combine the milk, eggs, and pumpkin spices in a mason jar at home and store in your cooler. The morning you’re cooking the French toast, pour the mix into a bowl, add the sugar, and whisk to combine.

↠ We recommend using a non-stick skillet for this recipe. A non-stick will allow you to easily turn the toast and prevent any hassle during cleanup. You can also get away with a lot less butter in the pan to prevent things from sticking.

↠ Keep your French toast warm on a second burner. We place a separate skillet or steel enamel plate over the second burner of our two-burner stove and set it to as low as possible. Once the first batch of French Toast is done, we move them to the warming station and cover the top aluminum foil. This traps the heat and keeps everything warm until we finish cooking the rest of the toast.

↠ Looking for a way to use the rest of the can of pumpkin puree? Add it to mac & cheese for this fall-inspired Pumpkin Mac & Cheese! It can also be added into pancake batter or into a coconut curry broth. 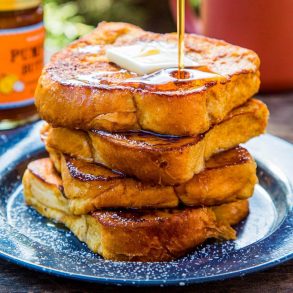