This is the one and only recipe you’ll need to make exceptional French toast on your next camping trip.

French toast is a great camping breakfast, but there’s a surprising number of ways for it go wrong. Too many times, we’ve made French toast that turned out too mushy, too eggy, or too rubbery. For Pete’s sake, it’s French toast! How hard can it be!?

So we took some time to break down the basics and figure out where we could perfect our technique. We discovered there were a couple of critical steps we had been just sort of winging this whole time. After a couple of tests, we’ve outlined what we’ve learned so you can make killer French toast right out of the gates.

The Best Bread for French Toast

The single best way to achieve exceptional French toast at a campsite (or anywhere for that matter) is to use whole loaf bread and slice it yourself. Pre-sliced sandwich bread is just too thin, cook through too quickly, and often results in rubbery French toast.

We recommend picking up a loaf of your favorite bread and cutting it into generous 3/4″-1” thick slices. You will be able to soak up more of the egg-milk mixture, giving you more time to crisp the outsides without overcooking the insides.

If you like your French toast to have a rich, custard-like center, then use a fresh loaf of bread. If you prefer firmer centers, then a day or two old loaves of bread will be best.

Most styles of bread will work, but we often go with sourdough. It is easy to find a whole loaf at most grocery stores and it adds a distinct tangy flavor that pairs nicely with the overall sweetness of the dish. Rustic French loaf, a baguette, or even a pumpernickel will all work as well (although the visual presentation will look different).

Previously, we’ve played fast and loose with this ratio. It really depended on how many eggs we had on hand. Sometimes one, sometimes four. This gave us wildly inconsistent results.

But after a few kitchen tests, we’ve concluded that 3 eggs to 1 cup of milk is the ideal ratio. Anything less and the mixture is too thin. Anything more and you’re making a Croque Monsieur.

For fresh bread, we found that a 10-second dip on both sides soaked up just the right amount of egg mixture. You want it to be moist throughout, but not totally saturated.

For stale bread, soak the bread slices for up to 20-30 seconds.

Adding vanilla extract, cinnamon, and even a little nutmeg are all good ideas for French Toast, but one critical step we had been leaving out was to add sugar to the mixture.

Not only does the egg-milk-sugar mixture soak into the bread and sweeten it from within, but it produces a crispy caramelized layer on the outside.

In fact, if you sprinkle a little extra sugar on the outside of your bread after you dip it into the mixture, you can get a spectacular golden brown finish on your toast.

Using a well-seasoned cast-iron or nonstick pan, you’ll want to cook your French toast over medium heat. Most camp stoves have relatively small burners and we found we were getting a hot spot right in the middle. This resulted in unevenly cooked bread, particularly if we were trying to cook two slices at once. The solution: more butter.

By cooking with more butter in the pan, the heat is more evenly distributed across the surface of the pan. We start with 4 tablespoons of butter and warm it up until just starting to froth. It might seem like a lot at first, but after toasting about eight slices of bread you may want to replenish.

French toast can be a quick and easy camping breakfast. Just follow these basic tips above and the master recipe below and you’ll be on your way to French Toast heaven. 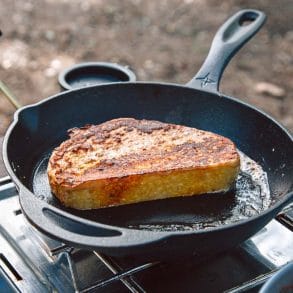 Nutrition estimate is based on one slice with no toppings or syrup taken into account.