For these autumn-inspired pancakes, we triple downed on the apple flavor. The batter is made using apple juice (or cider) and contains shredded apples in it. After the pancakes are cooked, we make a quick apple compote to serve on top.

So if you want to embrace the season and take your pancake making skills to the next level, these Apple Pancakes have got your name all over them.

Ready to get started? Let’s dive in and we’ll show you exactly how to make them.

Apple: Using shredded apple in the pancake batter adds flavor and texture. Just like in baking, we suggest using an apple that skews slightly tart, such as Pink Lady, Granny Smith, Braeburn, or Jonagold. They will retain their flavor and shape a lot better than overly sweet apples like Red Delicious, Envy, Sweet Tango, etc.

Apple juice or apple cider: You can use either, but the spices used in apple cider will really amp up the flavor.

Milk: The fat in whole milk really makes the pancakes moist and tender. You can also use extra creamy oat milk for a dairy-free option.

Egg: We love these hard-sided holders for protecting eggs in our cooler.

Sugar: Sugar helps crisp up the edges of the pancakes and adds a touch of sweetness.

Non-stick Skillet: While you can use a cast-iron skillet, we’ve found our non-stick skillet gives us more of a diner-style griddle experience. Non-stick skillets are better at conducting heat (made of aluminum), which produces a more even heat pattern when used on a camp stove burner. We love our GSI square skillet because we can get 4 pancakes going at once.

Spatula: If you’re using non-stick skillet, use silicone spatula. The thinner the better, for sliding under the pancakes.

Camp stove: Using a camp stove gives you far more control over the heat than cooking over a campfire. Our favorite camp stove is the Camp Chef Everest, which has great flame control so you can really dial in the heat on these pancakes.

Box grater: We like this collapsible box grater, which takes up less space while camping than a traditional one.

How to make cinnamon apple pancakes

Mix the dry ingredients (flour, sugar, baking powder, salt) at home and place them into a resealable container.

Once you get to camp, whisk the egg until completely smooth in a large bowl. Add the milk, cider, and stir to combine. Slowly add in your dry ingredients. You can shred the apple using a box grater directly into the bowl and on top of the dry ingredients. Slowly fold them into the mix until fully incorporated. You want to avoid excessive mixing, but also don’t want any big clumps of flour.

If you can, we recommend letting the batter rest for about 30 minutes to an hour. The flour will start to absorb the water and really thicken up and produce tall and extra fluffy pancakes. If it’s particularly hot out, you might want to pop it in the cooler or at least get it into the shade.

Remove the core and then cube an apple into roughly ½” cubes. Add to a small non-stick sauce skillet with either butter or coconut oil*, sugar, cinnamon, and salt. Mix together with a silicone spatula so that all of the apple pieces are evenly coated.

Cook over low heat, stirring periodically. Once the apples are soft and tender, you can cut the heat, and reserve until later.

*We used coconut butter in the video because that what we had, but having done it both ways before, we think a butter will give you a more traditional flavor.

On the other burner of your two burner stove, preheat a large skillet over medium heat. We are a big fan of this square non stick skillet by GSI, which allows us to make 4 pancakes at a time.

We really like frying our pancakes using coconut oil. It has a higher smoke point than butter and gives the pancakes a nice, toasty flavor. Alternatively, you can use clarified butter (or ghee), or another neutral flavored oil.

The trick to getting crispy edges on your pancakes is go heavy on the oil or clarified butter. Use about 1 tablespoon per batch of pancakes.

As for pancake size, we find it’s better to be on the smaller size. We scoop out about ¼ cup of batter. Medium heat seems to be the sweet spot for temperature. Too low and they’ll take forever to cook. Too high and they’ll burn before they cook through.

So, when is it time to flip? This eternal question has been debated throughout the ages. When bubbles rise in the middle? When the edges brown? When the cow jumps over the moon?

If you’re new to making pancakes, do yourself a favor and just lift up a corner with your spatula and peek once you see bubbles forming in the batter. If it looks golden brown, it’s time to flip.

There is a correlation between the bubbles and doneness, but the timing will depend on your skillet and heat source, so just take a sneak peek on your first couple and you’ll get a feel for it. Better to check and verify than to leave your pancake fate up to chance. 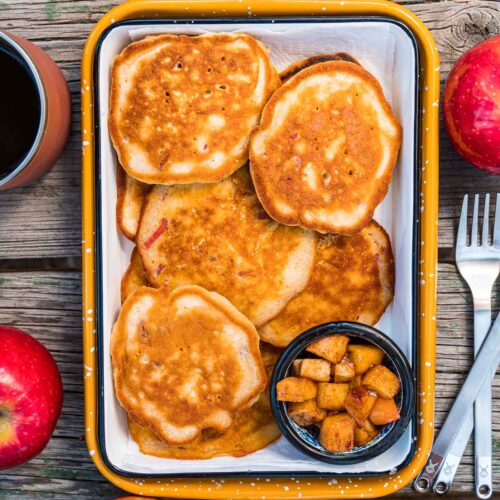