Assembling classic Thanksgiving flavors, this backpacking meal is a great way to get into the Thanksgiving spirit on your next backcountry camping trip. 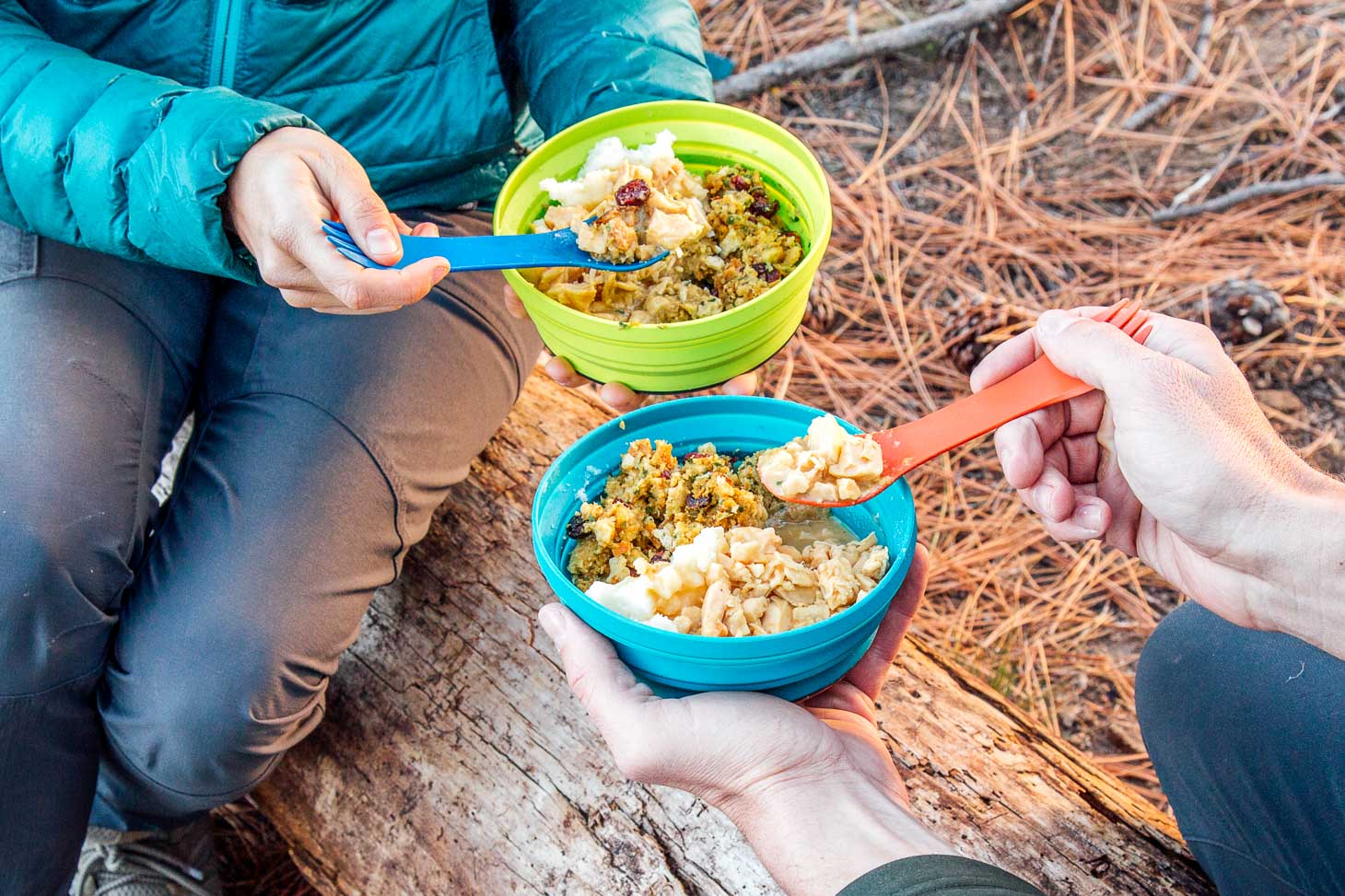 There are a lot of people who enjoy going car camping on Thanksgiving. A quick scan of hashtag #Campsgiving and you’ll find it is very much a thing. However, it takes a really adventurous person to spend Turkey Day in the backcountry.

Cold temperatures, unpredictable weather, and limited daylight make backpacking in shoulder-season a challenge. Chances are you’ll probably only be spending a few nights out, but while you are out there, you should at least enjoy a good meal!

That is why we developed this easy backpacking Thanksgiving Bowl. It captures the essence of the season while packing in a lot of calories. It’s also incredibly simple and quick to cook – because the last thing you want is to be waiting around for a late dinner.

So if a late-season backpacking trip sounds like it might be in the cards for you, then you’ll definitely want to check out this backcountry Thanksgiving feast!

How to Make a Thanksgiving Bowl

To capture as many Thanksgiving classics as possible, this recipe was designed to be an assembly of sides. But thankfully it only requires you to boil a single pot of water.

Most of the water is used to rehydrated instant mashed potatoes and dried stuffing, while the remainder is used to make brown gravy and chicken. Obviously, turkey would have been the ideal choice of meat, but pouches of chicken are more widely available. So chicken is what we went with.

While you only need to boil one pot of water, you will need to have two separate “vessels” to rehydrate the potatoes and stuffing. For a single person, this might require the creative use of a bowl and a mug. But for two people or more individuals, you just need to remember to bring along two bowls. Once rehydrated, you can redistribute so everyone has a little bit of everything.

This meal covers most of the Thanksgiving classics: creamy mashed potatoes, stuffing with cranberries, and a chicken with brown gravy. On a chilly November night, this meal can go a long way to bring the warming comforts of home out under the open stars. 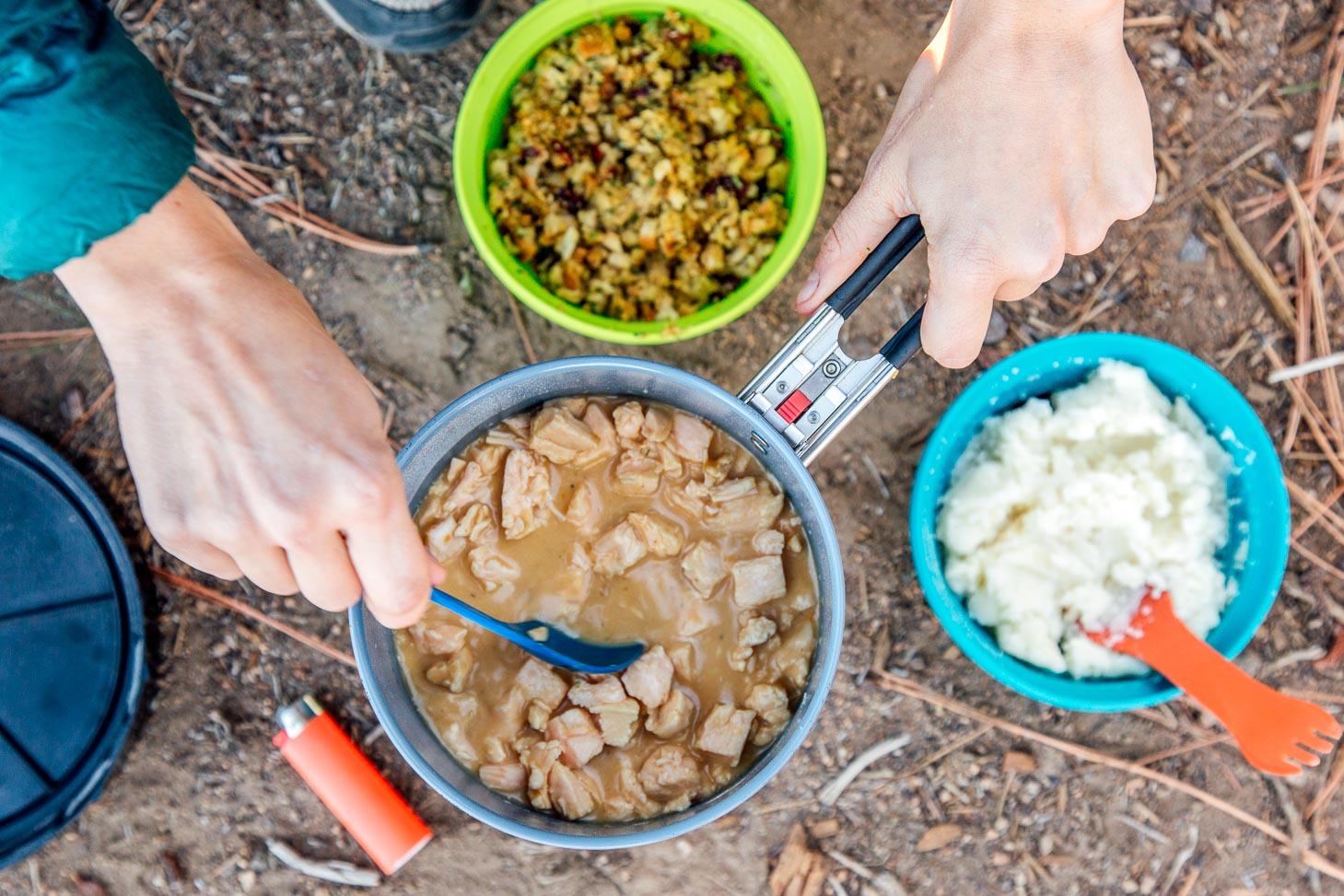 Ingredients for a Backpacking Thanksgiving Bowl

Chicken: A packet of pre-cooked chicken is the most convenient almost-Turkey replacement to take backpacking, though it is a bit heavy (nearly half a pound for two servings). Another option would be to bring freeze-dried chicken. We haven’t tested this variation specifically, but you would want to increase the amount of water you add to the gravy and cook the chicken and gravy together until the chicken fully rehydrates.

Powdered Whole Milk: This will add a bit of creaminess to the potatoes if you opt for the plain variety but could be omitted if you use a doctored-up brand like Idahoan.

Stuffing: For that classic not-so-healthy Thanksgiving flavor we prefer store-bought Stovetop stuffing, but this could be any packaged stuffing you prefer.

Turkey Gravy: Since it’s tough to bring *actual* turkey out on the trail, this meal gets its flavor from the gravy. Most stores carry a variety of gravy packets – we used McCormick’s Turkey Gravy for our recipe (unfortunately, Amazon only sells them in boxes of 24, but here’s what it looks like for reference).

Dried Cranberries: Do not skip these! Cranberries add little bursts of tart sweetness and bright acidity that really take this meal up a notch. 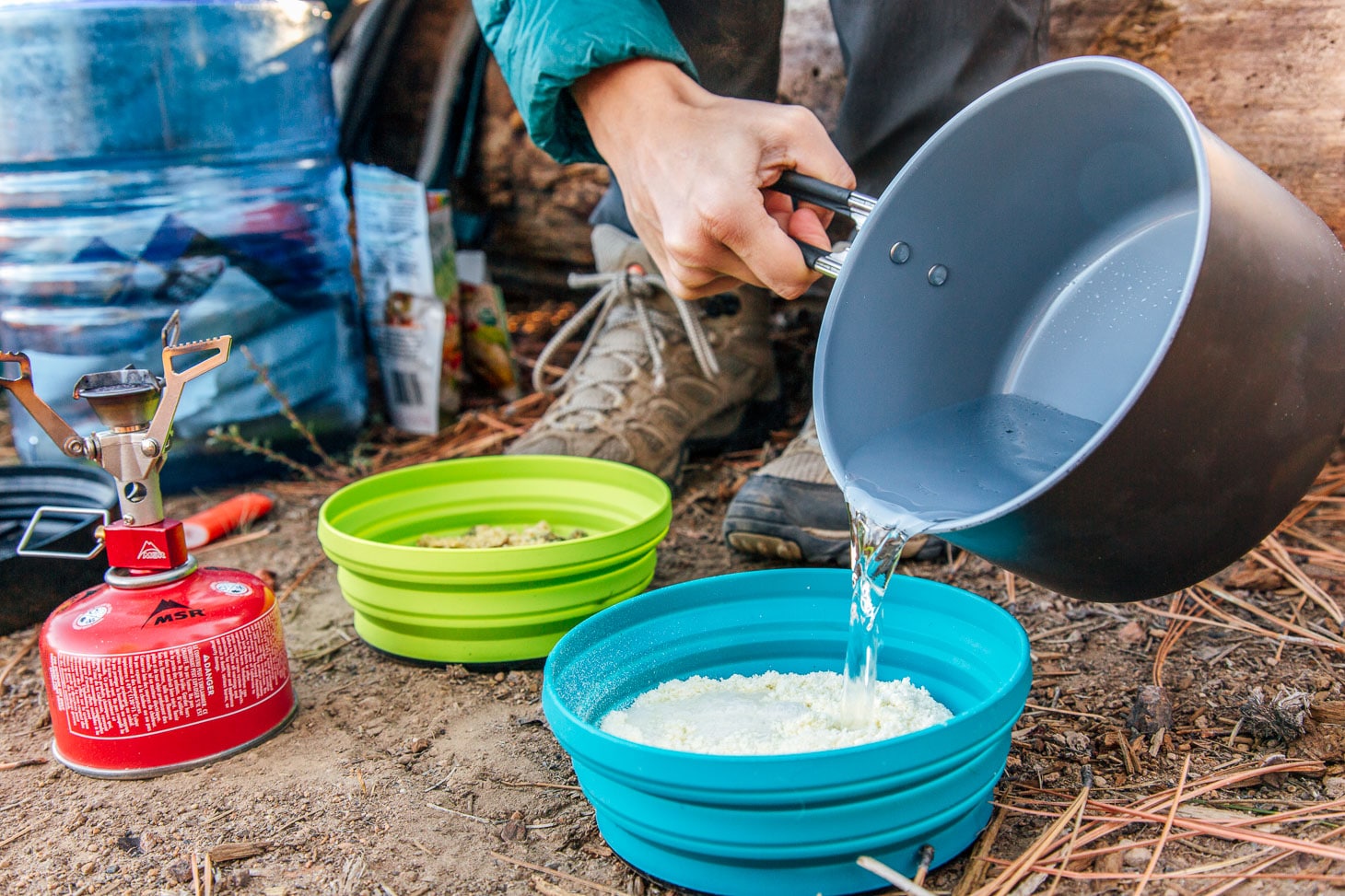 Pocket Rocket Stove: This has been our go-to stove for most of our backpacking trips. Super lightweight and compact. Although we suggest creating some sort of a wind shelter or buffer if there is a breeze.

MSR Ceramic Pot: We love this pot when we’re cooking our backpacking meals (rather than rehydrating them). The ceramic non-stick coating prevents scorching and makes it really easy to clean.

Sea-to-Summit Collapsible Bowls: We used these collapsible bowls from Sea-To-Summit for this meal. While you only need to boil 1 pot of water, you will need two separate bowls in order to rehydrate the stuffing and mashed potatoes.

Humangear Sporks: These are a great double duty fork/spoon combo.

Compostable Baggies: We recently started using these compostable bags in place of plastic ziplocks for our backpacking meals. Since there are a few ingredients in this recipe that can be pre-portioned before your trip, these bags are a nice alternative to plastic while still being lightweight. 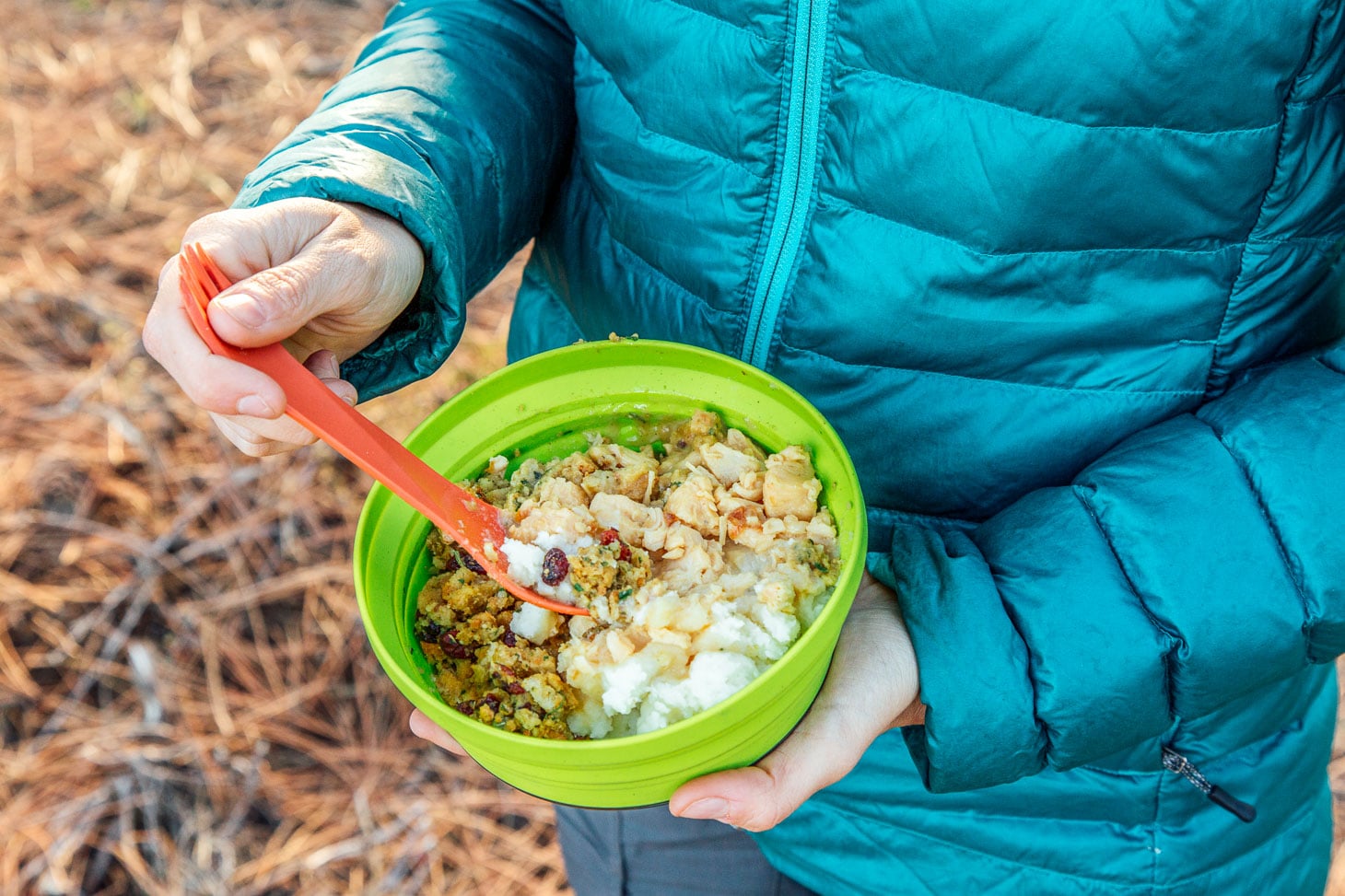 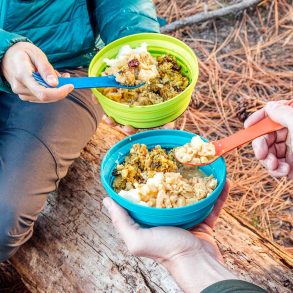 Assembling many of the classic Thanksgiving flavors, this backpacking meal is a great way to get into the Thanksgiving spirit on your next backcountry camping trip.
Author: Fresh Off The Grid
4.55 from 22 votes
Print Pin Rate SaveSaved!
Prep Time: 1 minute
Cook Time: 10 minutes
2 servings