Taking gourmet camp cooking to a whole new level of deliciousness, these cast iron skillet nachos are loaded with steak, jalapeños, blue cheese, bacon, and a flavorful beer-cheese sauce. Are they over the top? Look, probably a little… Are they worth the effort? Without a doubt!

As anyone who has seen our Campfire Nachos recipe knows, we’re big fans of making an “entree” size portion of nachos when we’re out camping. It’s a great way to bring an assorted hodgepodge of ingredients together into a super satisfying one-pot meal.

While some nachos recipes can be pretty stripped down and basic, this one is not. This one is super FANCY. It might take little extra prep work to put together, but the results are out of this world.

The concept came from 10 Barrel Brewing, which serves a version of these nachos in their brewpubs. The first time we had them, we were blown away by how rich and decadent they were. We are talking serious 10/10 nachos here.

So when 10 Barrel asked us to come up with camping version of the recipe for Fresh Off The Grid, we jumped at the chance. (I mean, who wouldn’t want to recipe test nachos!?)

At the pub, you can order a version of these nachos over a mix of french fries and potato chips. For our purposes, the french fries were out because despite all our travels we have never seen anyone bring a fryolator to a campsite. But the potato chip thing got us thinking, who makes a good potato chip for camping? Kettle Brand chips, of course!

So we reached out to Kettle Brand to see if they wanted to join in on this collaboration and discovered that it’s hard for anyone to say no to nachos. So with 10 Barrel’s recipe and Kettle Brand’s chips, we were off.

While we really wanted to keep this recipe as a one-skillet meal, to do it justice we had to break out the two-burner stove. One of the things that makes these nachos so so good is the depth of flavor from all the different cheeses. So to make the warm cheese sauce, we needed to use a separate saucepan.

You can use store-bought nacho dip if you want and keep it a one-pot meal, but if you want the full experience, this cheese sauce is where it’s at.

How to make steak nachos

We start with cooking some bacon in a cast-iron skillet. First, because bacon. Second, bacon is a great (and flavorful) way to grease the skillet. Once it’s nice a crispy, the bacon comes out, and cubed sirloin and sliced jalapeños go in. Knock that around with a bit of Cajun seasoning. Add in some shallots and garlic towards the end.

While that’s going you can add some cream cheese, shredded pepper jack, and shredded parmesan to a saucepan (bonus, if you happen to have it: add some cheddar in there as well!).

Add a little bit of milk or half-and-half if you have it, and a splash of 10 Barrel Brewing’s Trail Beer. Simmer that all on low, stirring frequently until it’s a smooth sauce.

When the steak mixture is done, take it out of the skillet and place it into a bowl. Now is when you break out your Kettle Brand Krinkle Cut Salt & Fresh Ground Pepper chips (these were the sturdiest in our testing).

Create your chip base-layer in your skillet. Sprinkle the remaining pepper jack cheese over the chips, then layer on the steak mixture, then some blue cheese crumbles, and the chopped bacon.

Drizzle your melted cheese sauce over everything and then cover with either a lid or aluminum foil. Head everything on low until warmed through. When it’s ready, remove the lid and top with chopped green onions.

It’s hard to replicate the uniform heat of an oven, but we found that stirring the nachos up from the bottom right before serving really distributes the heat (and coats each chip with toppings).

So there you have it: the recipe for life-altering nachos. If you’ve got a camping date you really want to impress or a crowd to feed, this recipe is sure to win over the hearts. So grab some beer and grab some chips and make it a fancy-pants nacho night! 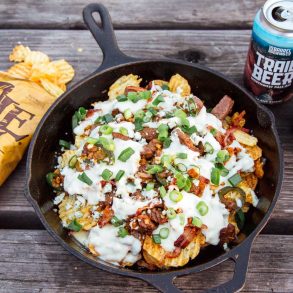 * It is important to use freshly grated cheese for the sauce. Pre-shredded cheese that you buy in the store is coated in an anti-caking agent, which will prevent you from making a smooth sauce. This step can be done at home ahead of time, just stick the grated cheese in a baggie or container and store in your cooler.