Hearty stripes of steak, browned mushrooms, filling egg noodles, and creamy sauce, this one pot Beef Stroganoff has been specifically developed to be made at a campsite. All you need is a cast-iron skillet to get started. 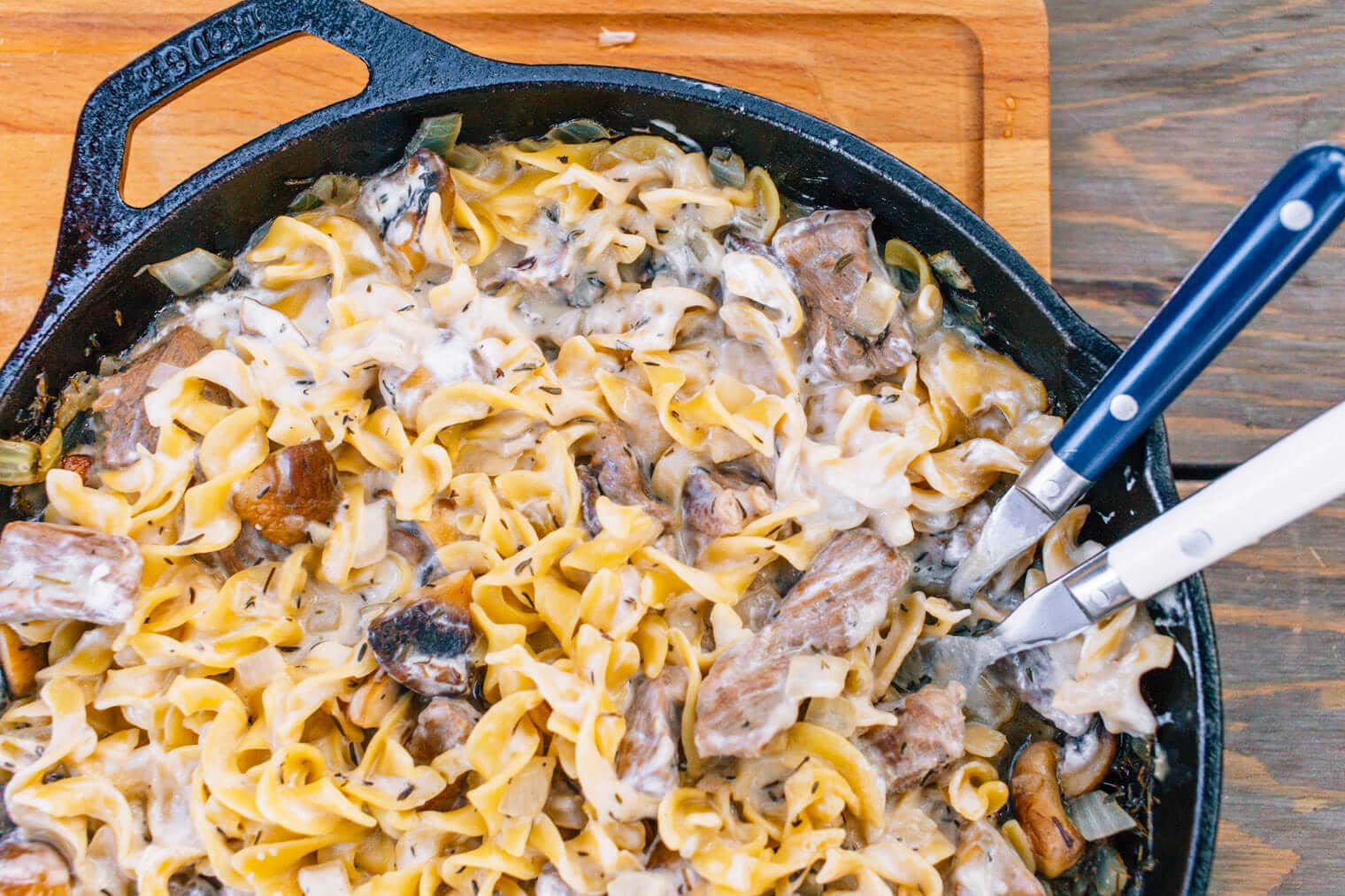 It’s a well known among backpackers that beef stroganoff is one of the best tasting dehydrated “meals in a bag” on the market. It’s warming, filling, and loaded with big savory, umami flavors. When we go backpacking and don’t feel like cooking, nine times out of ten we’ll pick up a bag of stroganoff. We’ve even done a few multi-day hikes where we ate stroganoff every other night. It’s just that good.

But what about car campers? Eating a dehydrated meal seems a little silly in the front country, but making traditional beef stroganoff is too much of a project at a campground. What if there was a streamlined, simplified beef stroganoff that had all the flavor of fresh ingredients, but also wasn’t a total hassle? Is there a way to make it into a one pot dish? We endeavored to find out. 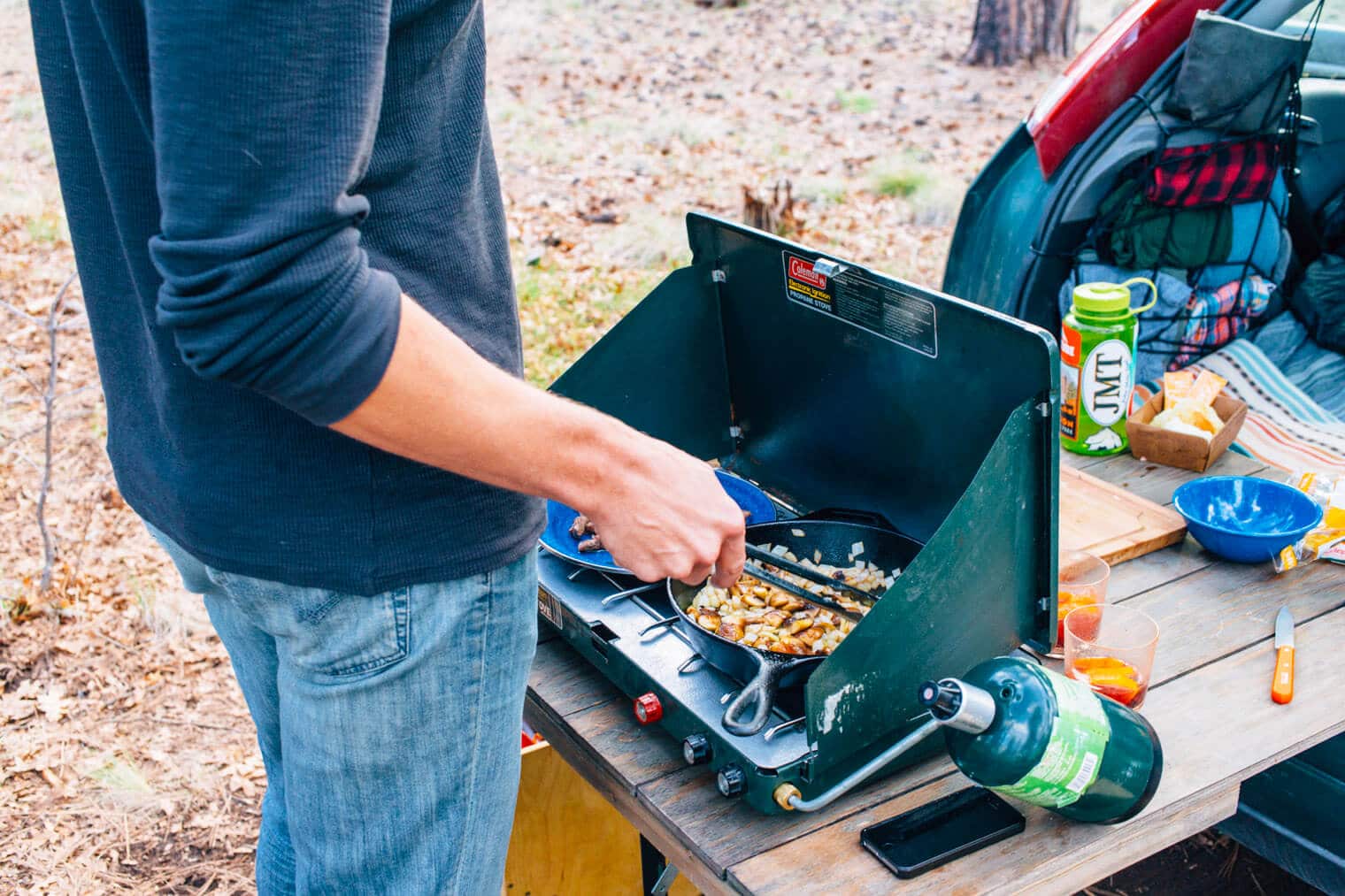 We did a lot of research beforehand and tested different versions, both in a kitchen as well as out in the field. Our goal was to keep the flavors while removing any non-essential elements. We tried a couple different cuts of meat, tinkered with the egg noodle to broth ratio, and tested to find just the right amount of sour cream. It was one of our more extensive (and delicious) recipe development processes.

In the end, we came up with a one pot beef stroganoff that’s worth every single second it takes to prepare! While it definitely takes more time and energy to prepare than pouring hot water into a dehydrated packet, we guarantee you that the flavors you get are so so so worth it.

What We Love About It:
↠ Unbelievably hearty, perfect camping comfort food
↠ Builds layers upon layers of flavor in the same skillet.
↠ No water big pot of water to strain for the noodles
↠ Get a lot of mileage out of that one cast iron skillet

How to make one pot beef stroganoff

Before you start, take a moment to quarter the mushrooms, dice the onion, and mince the garlic.

Begin by warming up your cast iron skillet over medium-high heat. While that’s going, liberally salt your steak on both sides. Add a couple of tablespoons of cooking oil into the skillet, then crank the heat all the way up to high. Once the oil starts to smoke, place the steak in the center of the skillet, and don’t touch it (1). Let it sear on one side for 3-4 minutes, flip it, and sear on the opposite side for another 3-4 minutes (2). Remove from the skillet, tent with aluminum foil, and let rest on a cutting board.

Meanwhile, reduce the heat down to medium and add in your mushrooms and onions. If the pan feels a little dry, feel free to add some more oil. Toss occasionally with your tongs, until mushrooms and onions start to pick up a nice brown color (3). Then add in minced garlic and knock that around it becomes fragrant.

Now add the beef broth. The liquid will instantly boil once it hits the hot skillet, which will deglaze the fond stuck to the bottom of the skillet and release a ton of great flavor (4).

Add in the Worcestershire sauce, thyme, and egg noodles. Bring the broth to a simmer and stir the noodles frequently. As the noodles cook they will absorb most of the liquid (5). Uncover your steak, cutting against the grain, slice into thin strips or medallions (8). Add to the noodles.

Chop up some fresh parsley and sprinkle on top to garnish. Enjoy!

↠ Camp Stove: While you can cook this recipe with most standard camp stoves, if you were in the market for a new stove, we would recommend this Camp Chef stove. It has two 20,000 BTU burners, which are twice as hot as most camp stoves. This allows you to put a beautiful high heat sear on the steak, while being able to dial down a really controlled simmer for the noodles.

↠ Cast Iron Skillet: Cast iron puts an amazing sear on the steak and retains heat like no other cookware. We cooked this meal in our 10” Lodge cast iron skillet, which is perfect for two people. If you’re doubling the recipe, then a 12” Lodge skillet would be better.

↠ Heat Resistant Gloves: The cast iron is going to get screaming hot, so you’ll want to have some heat resistant gloves to move the skillet around.

↠ Tongs: You’ll need a good pair of tongs for flipping the steak, moving the mushrooms, and stirring up the egg noodles.

Other one pot meals 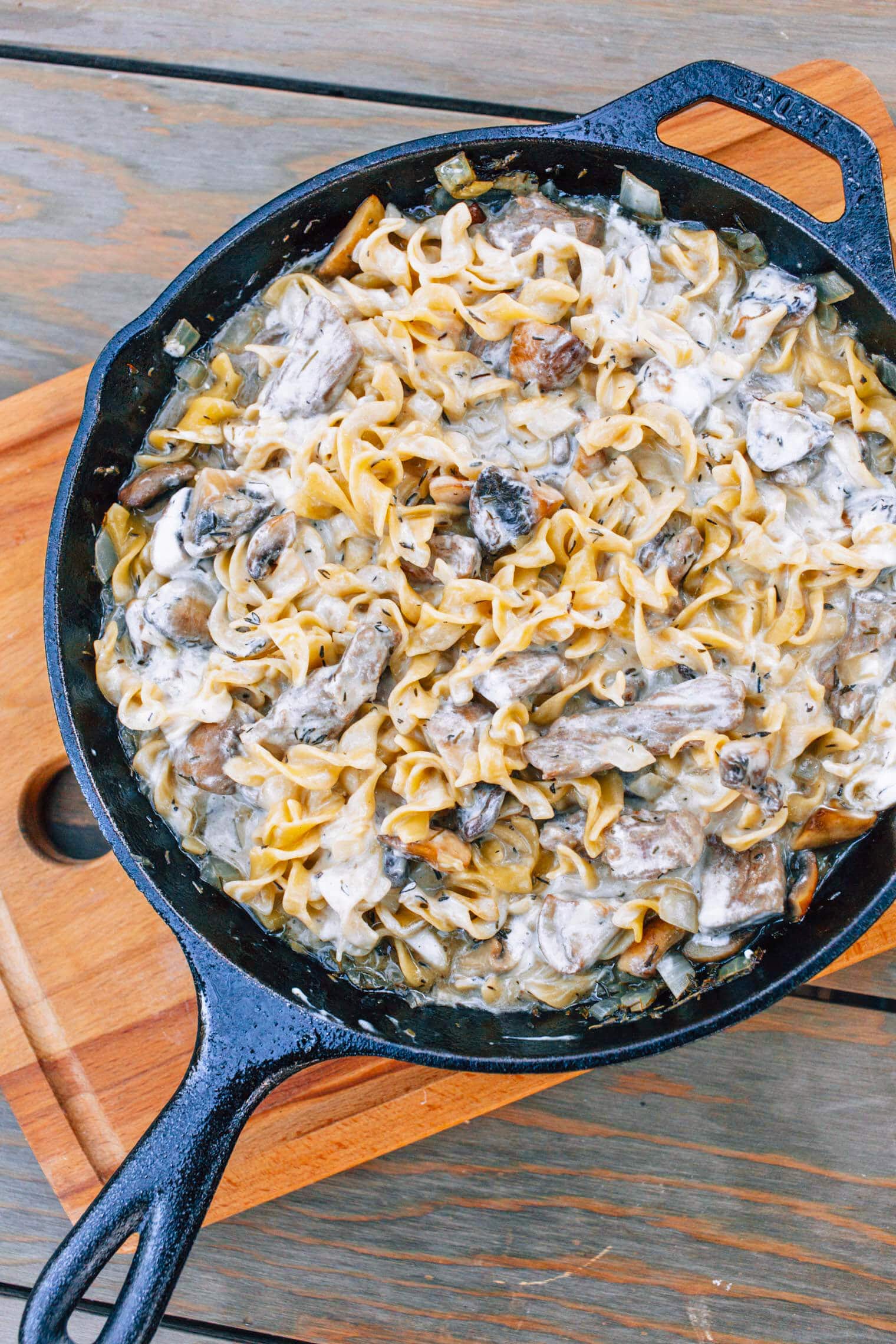 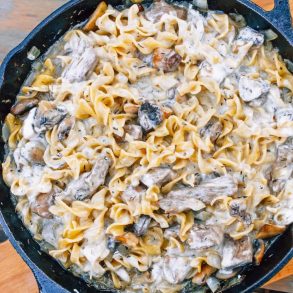 Calories: 525kcal
*Nutrition is an estimate based on information provided by a third-party nutrition calculator
Main Course
Camping