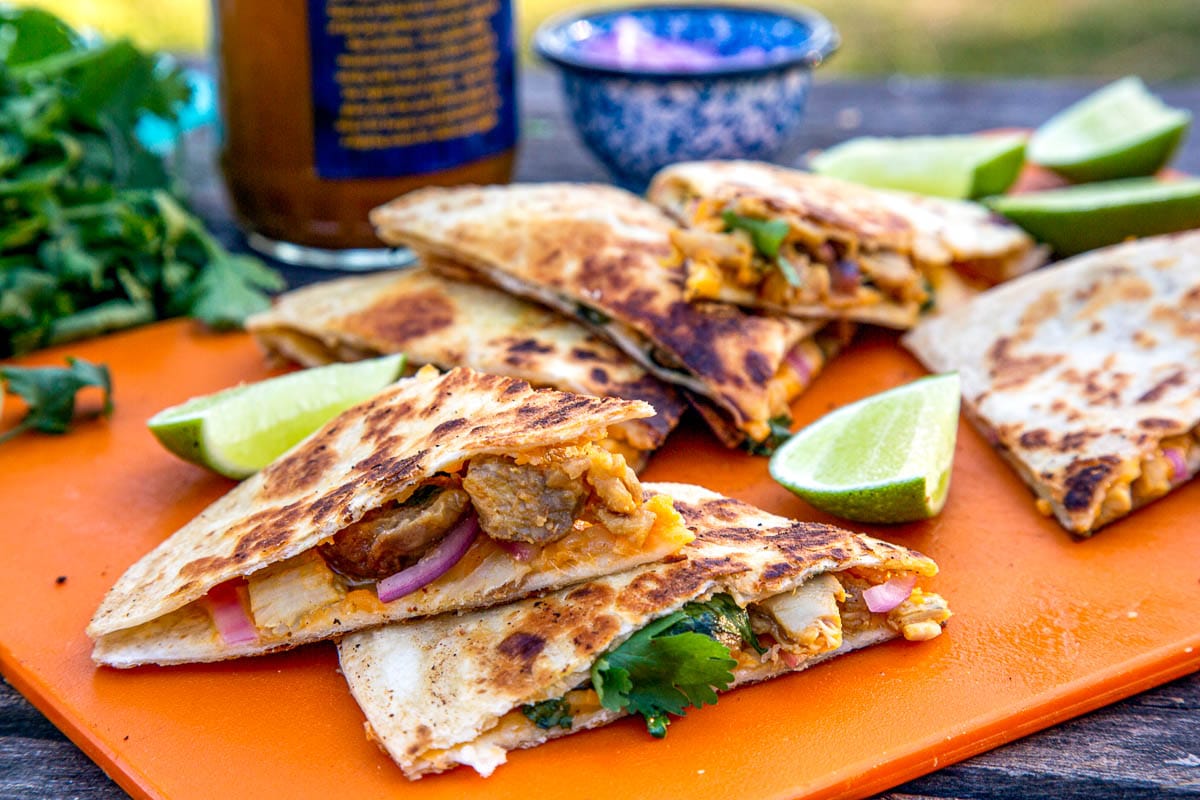 When you’re in a real pinch, nothing beats the satisfying simplicity of a plain cheese quesadilla. But if you have a little more time, adding in a few extra ingredients can really take your quesadilla game to the next level. Something that feels just a touch more gourmet.

For this recipe, the pan-fried chicken thighs add a nice pop of protein, while the sweetness of the sauce plays wonderfully against the citrus brightness of the pickled red onions. Add in some fresh cilantro and serve with sliced avocado on the side, and you’re got a first-rate camping lunch that is ready in 30 minutes. 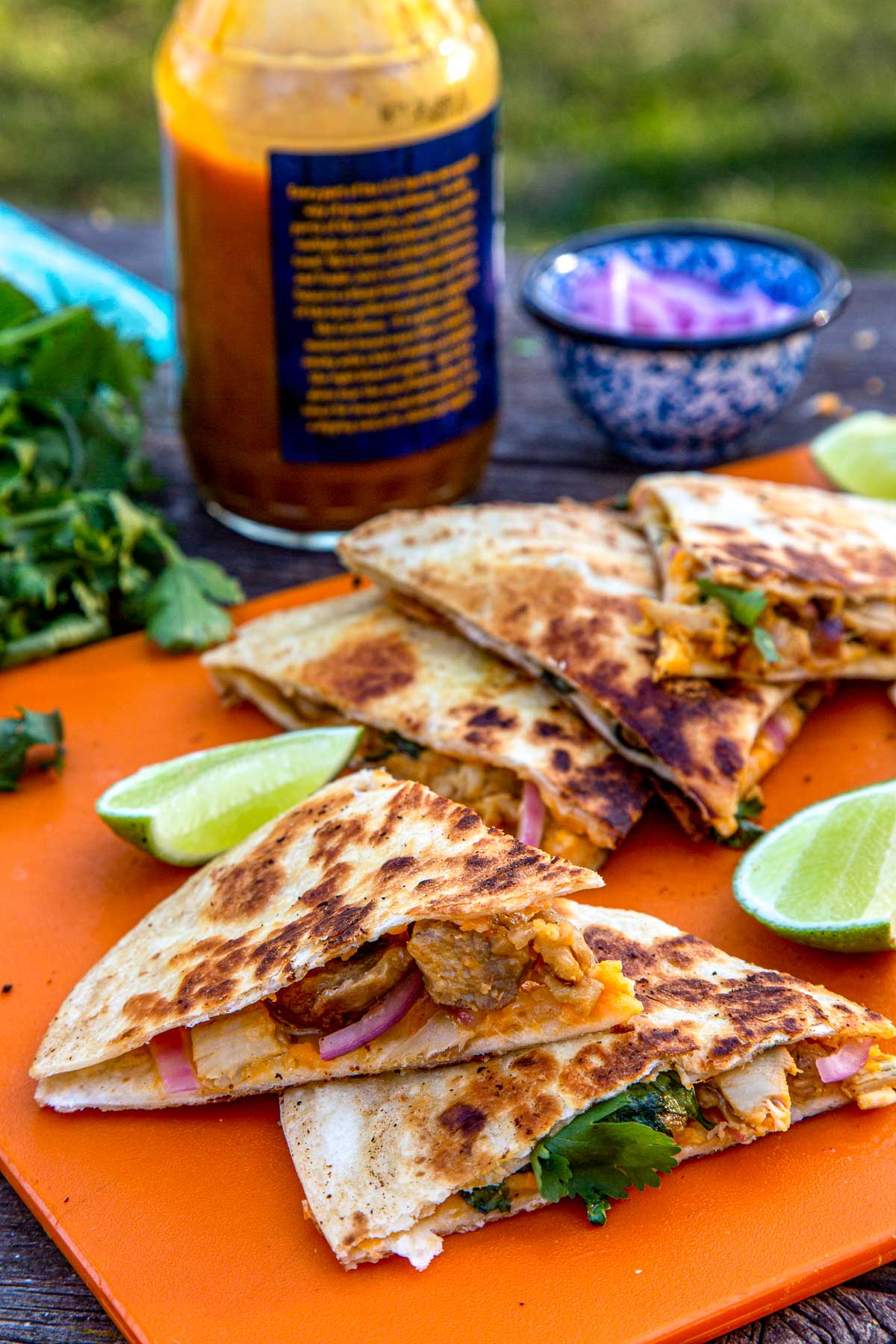 Why We Love These BBQ Quesadillas
↠ It’s a quick and easy lunch idea that uses a handful of camp-friendly ingredients.
↠ Customizable for each person. Pick your favorite BBQ sauce, add beans, remove the meat, double up on the spice or leave it out.
↠ Fast Production Time. Once the skillet is warmed up and the ingredients prepped, you can knock a bunch of these out really quickly. Great for groups.
↠ It’s a hit with the kids! Few meals are as universally beloved by children than quesadillas. If you have picky eaters, leave some chicken aside before adding the BBQ sauce.

So if you’re stumped on what to make for lunch on your next camping trip, give these BBQ chicken quesadillas a try! 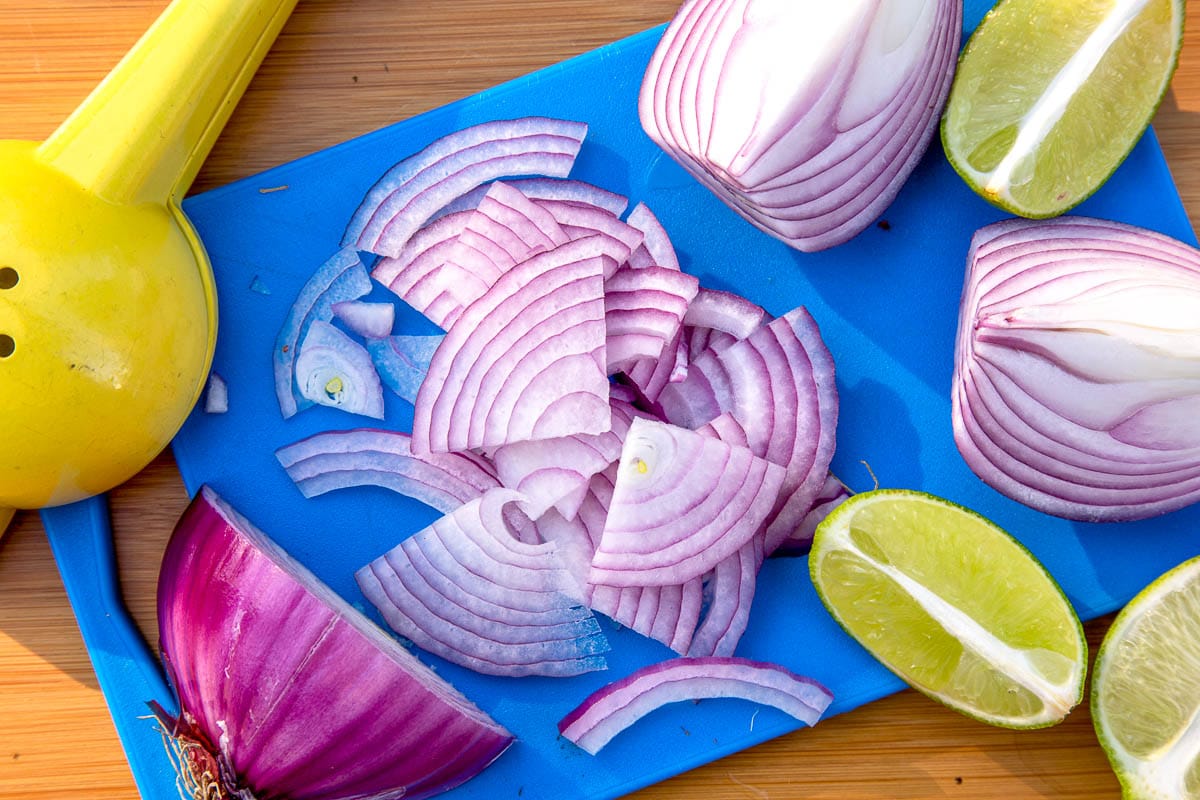 Pre-trip Prep and things to make ahead

↠ Pickled Red Onions: You can (and should) make the pickled red onions ahead of time. They taste the best after they’ve had a day or two to mellow out (although they can be used with as little prep time as 30 minutes).

↠ Cheese: Purchase shredded cheese or grate your cheese ahead of time and pack in a sealed container in your cooler.

↠ Chicken: Cook and chop the chicken ahead of time, then store it in a sealed container in your cooler.

How to make BBQ Chicken Quesadillas

The first step is to make the pickled red onions—either at home or at camp. Thinly slice a red onion and soak it in a mixture of lime juice and salt. That’s it. Ideally, this should be done 1-2 days in advance. (kept in the fridge at home and in the cooler at camp). This will allow the flavors a chance to mellow out. However, if you forget, you can make it on-site 30 minutes in advance. 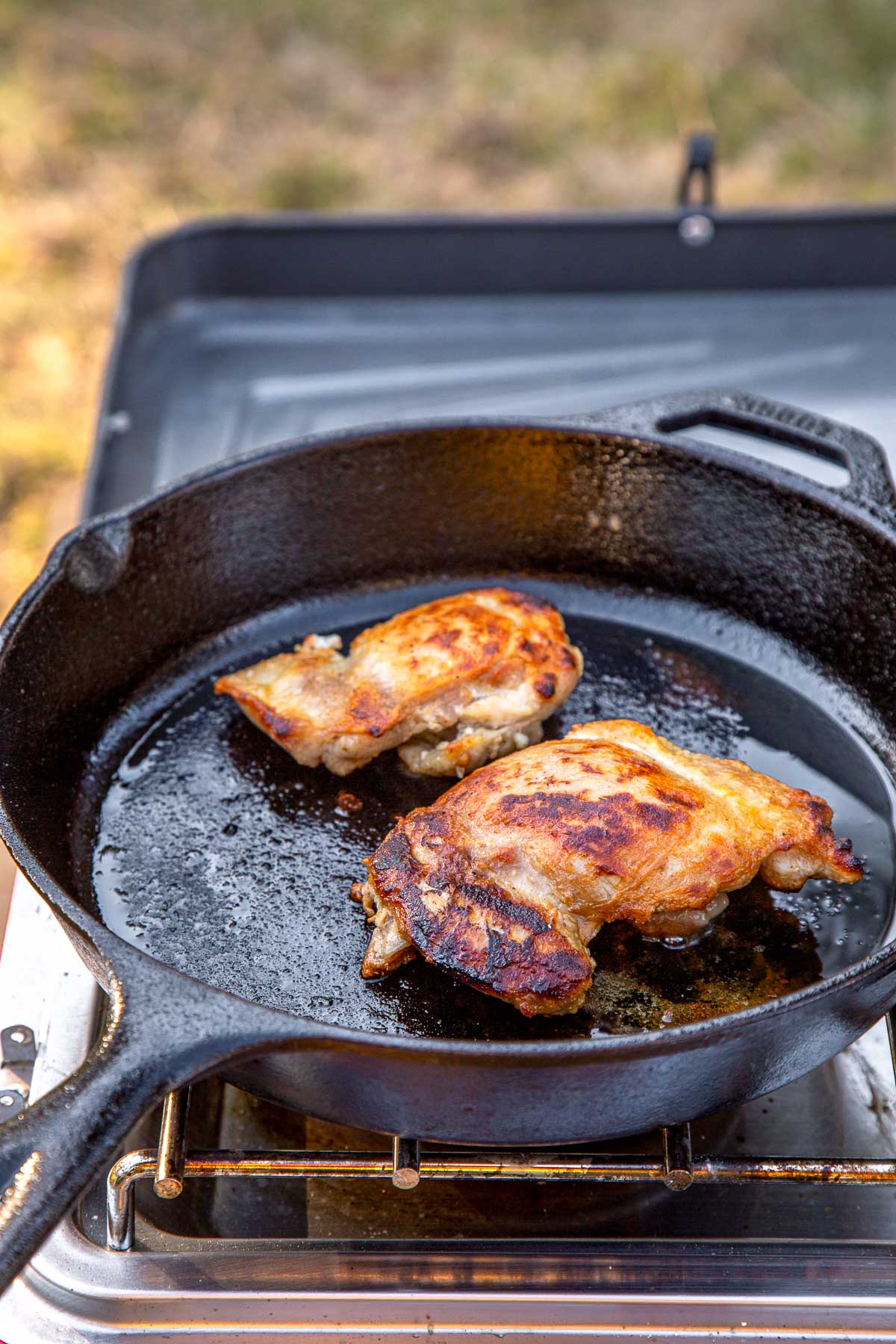 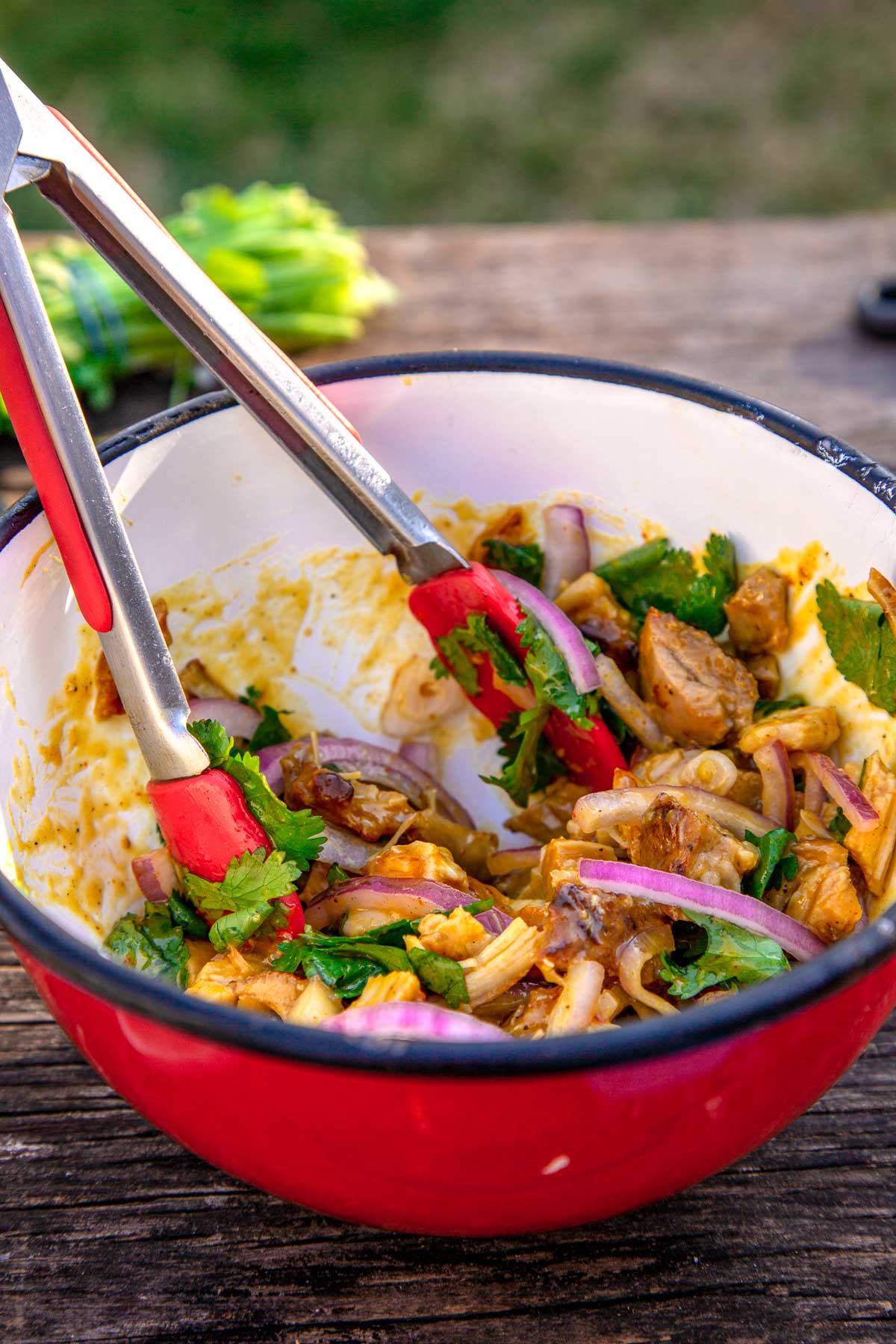 Next up, cook the chicken. Pan-sear a couple of seasoned chicken thighs in a cast-iron skillet, flipping them as needed to cook evenly to 165F. Using a small instant-read thermometer will help take the guesswork out of knowing when they are done.

Chop the chicken into bite-sized pieces, place in a bowl and toss with BBQ sauce (our favorite is Carolina Gold!) with some of the pickled onions (drain them well – too much of the lime juice will make the cheese funky) and chopped cilantro, and toss until evenly coated. 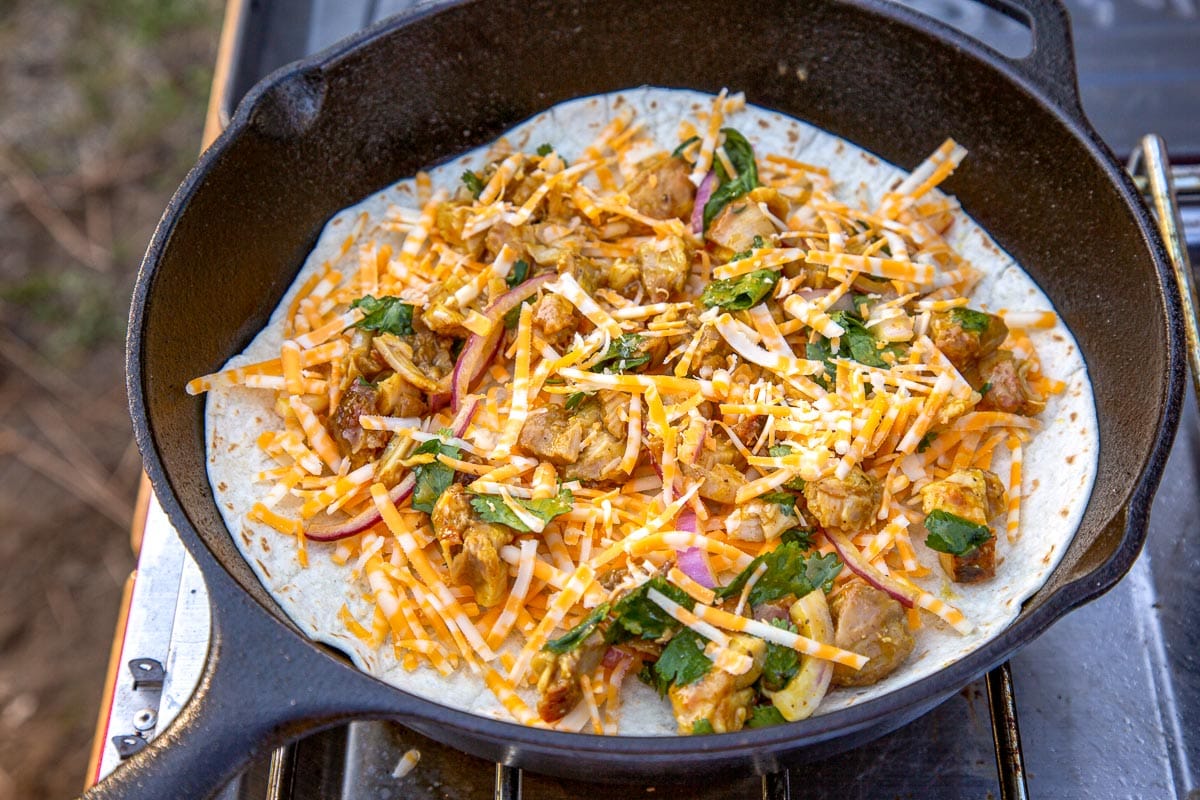 Wipe out your skillet and add the butter. For each quesadilla, assemble directly in the skillet: Bottom tortilla, ¼ cup of shredded cheese, half the chicken mixture, another ¼ cup of shredded cheese, and a second tortilla. Cook until the bottom is golden brown, 2-4 minutes, then flip. Cook 2-3 minutes more, until the second side is golden brown and the cheese is melted.

Then, all that’s left to do is cut the quesadillas and serve with your favorite toppings: salsa, avocado or guacamole, sour cream, you name it!

↠ Cast Iron Skillet: We love cast iron when we’re making quesadillas because it really radiates the heat above the surface of the skillet. This helps melt the cheese on the inside well before you risk burning the tortilla.

↠ Instant Thermometer: Remove any doubt about when the chicken is properly cooked with a quick, instant-read thermometer. 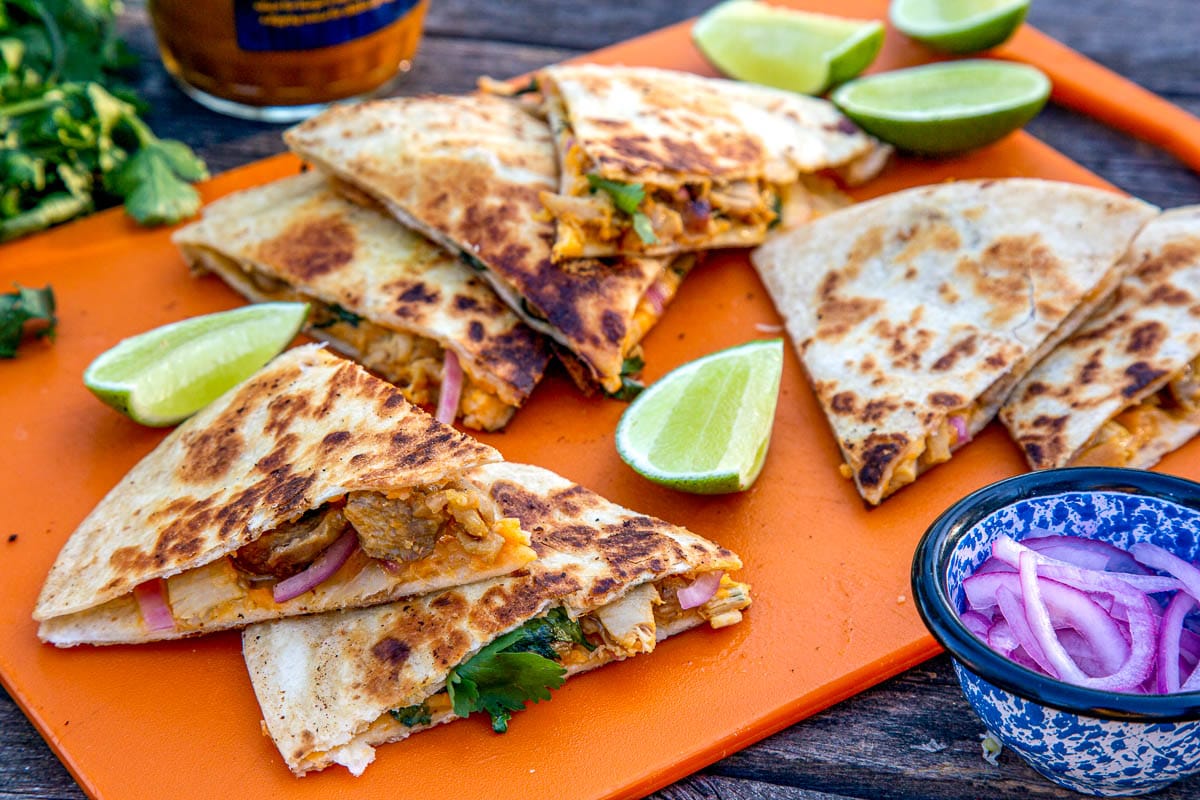 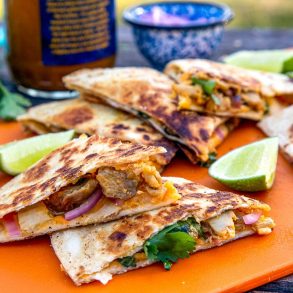