Sauteed mushrooms, briny capers & olives, crispy rice, and the heavenly smell of saffron, this vegan paella is an incredible one-skillet meal to try on your next camping trip.

In many ways, paella is an ideal camping meal. It’s cooked and served in one skillet, can be made over a single burner (or campfire), and only takes about 30 minutes to make!

The only issue is that many people associate paella with seafood (paella de marisco), which can present a real food storage challenge at a campsite.

So we swapped out the highly perishable seafood with shelf-stable olives and capers to convey the same salty, briny flavor. The result is a vegan-friendly meal that feels super satisfying while being vastly more approachable for camping.

While paella is super customizable with a lot of mix-in options, we do insist on two things: saffron and socarrat.  The aroma (and color!) of Spanish saffron is intrinsically linked to paella, while the crispy bottom crust of rice—known as the socarrat—is an essential element of the dish. Otherwise, it’s just rice with stuff in it.

So if you’re ready to impress your fellow campmates with some next-level camp cooking, this vegan paella is a great place to start. Don’t worry if you’ve never made paella before, we’ll cover all the basics below!

Why we love making paella when camping:

Camping by the coast and want to make a more traditional paella? We have a great seafood paella recipe, too!

If you have never made paella before, here is a rough outline of how the process is going to work.

You are going to start with a large skillet, then keep adding ingredients to it. There won’t be a ton of time between each stage, so you will want to have your ingredients prepped ahead of time.

Those are the basic motions of every paella, so once you get the hang of it, you will be able to start making your own improvisions.

After all the moisture evaporates, the fully cooked rice will start to fry with the remaining oils along the bottom of the skillet, resulting in a crispy layer known as socarrat.

Not only is the socarrat the most prized part of any paella, but it’s the most elusive part of the meal. If paella is pulled from the heat too early, no socarrat will form. If left on too long, the bottom will burn and blacken. You’re looking for that magic zone, when it’s lightly browned and crispy.

Don’t worry, we’ll go over the tell-tale signs to listen for so you know when your socarrat is ready.

Select the right cookware: A highly conductive pan is key to even heat distribution. Have a paella pan? Perfect. Stainless steel, carbon steel, enamel steel, or copper skillet? Those will all work too!

Cast iron? That’s what we used! It’s not ideal but there are some tricks on how to make it work (see Equipment section below).

Don’t rinse the rice: Unlike a lot of other rice dishes, with paella, it’s actually better to not rinse the rice beforehand. You want to retain some of that starchiness to help absorb and thicken up any remaining liquids.

Don’t stir the rice: Once you have added the rice and the water, you can quickly flatten everything out with your spatula, making sure there are no mounds and that the liquid is more or less covering all the ingredients. And then, hands-off for the rest of the meal. Stirring will cause the rice to dump a lot of starch and interfere with the development of the soccarat.

Best rice for paella:  Paella is made with highly absorbent short-grain rice. While traditionally made with Spanish Bomba rice (sometimes sold as Calasparra) we’ve never seen this sold in any US grocery store. So we opt to use any short grain that’s available – like Calrose or Sushi rice, or medium-grain rice like Arborio (risotto rice) if we’re in a pinch.

Mushrooms: In this plant-based paella, the mushrooms are the star of the show. Cremini or white button mushrooms will work great, but also consider using oyster mushrooms which have a little more dynamic flavor and texture.

Olives, capers, artichoke hearts: Replicating the salty taste of seafood, these briny substitutes can be mixed in at your discretion. We absolutely love olives and capers, so we tend to go heavy on them. But brined artichoke hearts are another great addition.

Saffron: An absolutely essential part of any paella, saffron can be a bit spendy at traditional grocery stores but Trader Joe’s always has it at a very reasonable price.

Water/Broth/Wine: If you want to keep things simple, you can use all water. But if you want to boost the flavor, consider a vegetable broth. And for the best results, do a 4:1 broth to white wine ratio. (e.x. 2 cups broth to ½ cup white wine)

Traditionally, paella is made using a special paella pan. These shallow-sided pans are often made out of carbon steel and have a flat bottom to evenly distribute the heat. The result is an evenly cooked rice with a uniformly crispy socarrat.

Cookware that has poor heat distribution will often have underdone rice on the edges and a scorched soccaratt in the middle.

If you are like us and can’t justify buying such a niche piece of cookware, never mind dragging it out to a campsite, don’t worry, you have some options.

Carbon steel, stainless steel, or steel enamel.  A large stainless steel skillet with a flat bottom is going to be your best alternative. Steel cookware conducts heat very well, resulting in even heat distribution across the bottom.

Cast iron is a very poor conductor of heat, but it’s what many people cook on when camping (ourselves included). The key to making cast iron work is to properly size your skillet to your heat source.

Using cast iron to make paella over a campfire, charcoal, or a propane BBQ is great because the heat source is bigger than the skillet. Therefore the whole skillet will heat up evenly. No hot spots, no problem.

But if using cast iron on a camp stove with a small burner, here’s what to do: Periodically (every 2-3 minutes) reposition the skillet over the burner so the edges get some direct heat.

You will also want to pull the paella as soon as the socarrat in the middle starts to form. If the rice on the edges isn’t done yet, that’s okay. Just cover with a lid or aluminum foil and let the residual heat steam the rest of the rice.

All of our favorite camp kitchen essentials can be found in this camp cooking equipment guide!

How to Make Paella

This meal is a burst of activity at the beginning followed by a long, slow simmer. So prep your mushrooms, garlic, tomatoes, and olives ahead of time and have your water pre-measured. (We like to add our saffron to the water, so it carries the flavor throughout the dish.)

Saute the mushrooms in 1 tablespoon oil until it just starts to turn golden in spots, then add the garlic. Add two more tablespoons of oil and then add the dry rice. Using a spatula, push the rice around until it’s evenly coated in oil. Then add the water. As the water starts to boil, add in the tomatoes, olives, and capers. Sprinkle it with salt, and then reduce it to a simmer.

Now the waiting game begins. If your camp stove has a smaller burner, you will want to periodically move the skillet from side to side so it is heated evenly without disturbing the ingredients too much.

As the water evaporates, the sound will transition from a hiss to a crackle. That is the rice crisping on the bottom. Once you’ve reached this stage, you have another 5-10 minutes. If you’re getting nervous, you can check the center with a spoon to make sure nothing is burning.

Once the socarrat has formed, remove the skillet from the heat. Using an upside-down metal spatula with firm pressure, scrape underneath the rice to release the socarrat from the skillet. It will break apart in sections and can be mixed into the rest of the rice, adding a delicious crispy-crunchy texture. 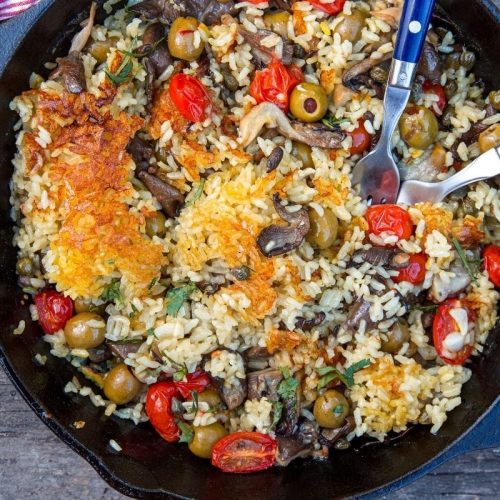 Calories: 345kcal
*Nutrition is an estimate based on information provided by a third-party nutrition calculator
Main Course
Camping