Bursting with flavor, these grilled shrimp are incredibly easy to prepare and cook in virtually no time at all. They’re perfect for an appetizer or main the next time you’re firing up the grill!

One of the fastest things you can cook over a campfire or grill are shrimp! Once the skewers go on the heat, it only takes a couple of minutes before they’re ready. But getting grilled shrimp that are nicely charred and are popping with flavor, takes a little prep work.

Below we share our simple seafood marinade. This marinade will not only give your grilled shrimp a ton of flavor, but help them develop that exterior browning quicker. We also share our tips on which type of shrimp to get and how to best skewer them. With a little prep work, the grilling step will feel like a breeze.

So let’s jump it and and you’ll have those shrimp on the grill in no time!

We recommend buying large, frozen shrimp with the shell on.

Frozen or “Fresh”: Nearly all shrimp are flash frozen at sea shortly after being caught and are shipped frozen to the market. The “fresh” shrimp you see at the local fish counter and just frozen shrimp that have been thawed for display. It’s better for you choose the time when to thaw the shrimp—so buy frozen.

Check the bag for freezer burn (big chunks of ice), which can indicate the package was partially thawed or mishandled during packaging.

Size Matters: When grilling shrimp, the bigger the better as they won’t over cook as quickly. Unfortunately, shrimp size is fairly unregulated. Words like Large, Jumbo, and Colossal have no specific definition.

Deveined, shell on, tail on. This is a fairly common shrimp preparation combination, which is sometimes labelled as “EZ Peel”. We find this to be the best compromise for most camping and backyard grilling applications. These shrimp will have very good flavor and texture, while reducing some of the tedious work of deveining. You will still need to remove the shells yourself, but this is worth the effort.

Shrimp: Frozen, large as possible, deveined, shell on, tail on (EZ Peel). Make sure they are fully thawed prior to marinating.

Sugar: We add a little bit of sugar to the marinade to help encourage exterior browning.

Lemon Juice: A little acidity can really make each bite pop with flavor! Just don’t over marinate, because the acid will eventually start to alter the shrimps’ texture (we’re making grilled shrimp here, not ceviche!).

Old Bay: There is no seasoning so intrinsically linked to the flavor of seafood then Old Bay.

Chopped garlic, parsley, and butter: For the final toss, a little chopped parsley and butter will take your shrimp the extra mile!

Before marinating, the shrimp need to be completely thawed. If you are transporting them in a cooler, this might happen naturally. If they are still a little frosty, the best way to fully defrost them is to place them in a large bowl of water and let them soak for about 10 minutes.

Once they’re done defrosting, you will then want to remove the shell, but leave the tail on.

While the shell can act like a heat buffer while grilling (which is good), it prevents the marinade from penetrating into the shrimp (which is not so good). It also puts the exterior char on the shell not the meat. That’s why like to remove and discard the shells before we begin the marinade.

Shrimp shells smell a little fishy, so we recommend putting them in a disposable zip top baggie, otherwise your trash can is going to have an aroma.

Old Bay season contains a decent amount of salt. So if you’re using Old Bay, additional salt will not be needed. But if you are not using Old Bay, and substituting it with something like paprika, then you will want to add about 1 teaspoon of salt for 1 pound of shrimp.

Toss the shrimp in the marinade and then return to the cooler to chill for about 1 hour. Don’t marinade for more than 2 hours, or the shrimp will start to deteriorate is texture due to the acidity of the lemon juice.

The best way to skewer shrimp is by tightly packing them together on the skewer. Not only does this prevent them from rolling around, but it also reduces exposed surface area and thus slows down the cooking process. Packing the shrimp tightly together on a skewer will help prevent you for over cooking them.

We prefer to use flat metal skewer because they are reusable, won’t catch on fire, and prevent the shrimp from rolling around.

You can also use round bamboo skewers, although it’s advisable to pre-soak them in water for 10 minutes prior to use. With round skewers, we like run two through a single shrimp to prevent them from rolling.

You want to hit shrimp hard and fast with high, direct heat. They will cook through in less than 2 minutes, so it’s a race to develop a nice exterior char as quickly as you can.

We like to let the shrimp go a little long on the first side, about 1 and a half minutes, then flip for go for another 30 seconds. If you’re cooking over really high heat this will be plenty of time.

If you can’t develop much char in that time, that’s okay! It’s better to pull the shrimp on time and then it is to leave them on longer in order to chase the char. Plump, tender shrimp without char are much better than overcooked rubbery shrimp with a char.

The difference between good and extraordinary grilled shrimp is giving them a final toss in a large bowl with some fresh herbs and melted butter. The herb-butter coating not only add a ton of flavor and visual appeal to your shrimp, but it also helps prevent the shrimp from drying out.

Try about 2 tablespoons of very soft or melted butter (shrimp straight off the grill will melt the butter). As for fresh herbs, try chopped parsley, cilantro, or basil. 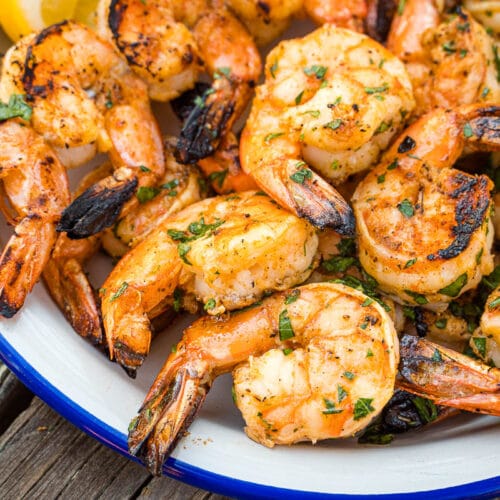 Bursting with flavor, these grilled shrimp are incredibly easy to prepare and cook in virtually no time at all. They’re perfect for an appetizer or main the next time you’re firing up the grill!
Author: Fresh Off The Grid
No ratings yet
Print Pin Rate SaveSaved!
Prep Time: 15 minutes
Cook Time: 5 minutes
Marinating Time: 1 hour
Total Time: 1 hour 20 minutes
2 -4 servings

If you don’t use the Old Bay Seasoning, you’ll want to add a bit of salt to the marinade–about 1 teaspoon per pound of shrimp.