Panzanella is an Italian bread salad that can feature a wide assortment of seasonal ingredients (like this summery peach panzanella!). Unlike salads that contain mostly leafy greens, a panzanella salad is made up of a base that’s mostly toasted bread. If croutons are your favorite part of a salad, then panzanella is going to be your jam!

We wanted to capture a wide range of fall flavors and ingredients, so we included apples, cranberries, pecans, and arugula. The dressing is a maple mustard vinaigrette that adds a fantastic zing to the dish.

While it can be a tough sell to pass a leafy green salad off as a lunch, especially if you have young kids, a panzanella salad like this is hearty enough to hold its own. So if you’re looking to switch up your lunch routine, give this seasonal panzanella try!

How to make fall panzanella salad

First thing first—make the dressing. Add olive oil, maple syrup, apple cider vinegar, dijon mustard, and salt to a small jar, seal, and shake to combine. If you’re going to be making this dish for camping or a picnic, do this step ahead of time and store it in your cooler.

Next, prepare the bread salad base. The bread is the star of this recipe, so start with a good, crusty loaf or baguette. This recipe works best with slightly stale bread, so if you’re able to, cut or tear the bread into bite-sized pieces and leave it out overnight. If not, no worries—the next step will help you out!

Heat some oil in a pan and once it’s hot, add the bread cubes, tossing to coat. Toast, tossing frequently, until the bread is golden on all sides. Transfer to a large salad bowl. This step is optional if you’re starting with stale bread, but we personally love the golden crunchy bits!

Add the sliced apples, arugula, goat cheese, cranberries, and chopped pecans to the bowl with the bread.

Pour the prepared dressing over the salad, then toss to coat. Let the dressing soak into the bread for 10-15 minutes, then crack pepper over the top and serve.

If you’re going to make this fall panzanella while camping, or bring it to a BBQ or picnic potluck, here are the things you can do at home ahead of time:

How to make it vegetarian or vegan

To make this fall panzanella salad vegetarian or vegan, switch out or omit the cheese. For a vegetarian version, try to find a goat cheese that does not list rennet as an ingredient.

For a vegan version, omit the cheese altogether, or use vegan feta like VioLife’s Just Like Feta. 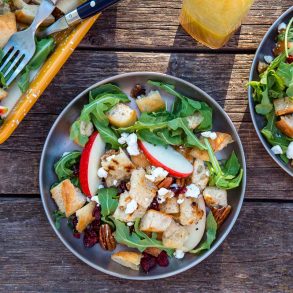