Introducing our newest Fresh Off the Grid contributor: Jen Sotolongo from Messkit Maven. She spent the last two years bikepacking through Europe and South America, making her an expert on quick & easy meals on the road. She shares with us a lightweight breakfast recipe for vegan scrambled “eggs” using protein packed chickpea flour. 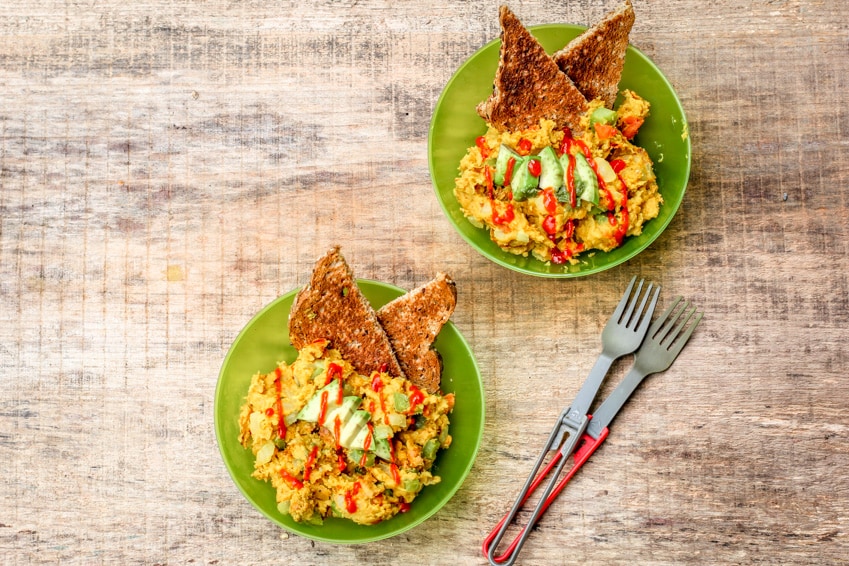 As soon as I walked into Salud Pan in Medellin, Colombia’s Laureles neighborhood, I knew I had found my happy place. In addition to serving exquisite vegan and gluten free fare, Salud Pan also included the largest natural store selection I had seen in my year and a half traveling by bicycle in South America.

My eyes widened as they scanned over foods I hadn’t seen in ages: Giant containers of coconut oil, whole grain bread topped with seeded goodness, a bulk section with all the spices I could ever imagine, and grains like farro, bulgur, and millet. I stopped the moment I came across an ingredient I had long wanted to use but had yet to try: Chickpea flour.

After eating overnight oats for well over a year during our bicycle tour, our vegan breakfast options had become limited. We needed to prepare something quick in the mornings so that we could be on our way with plenty of time to spare before either the heat or darkness forced us to stop.

Time after time on our trip, we would consider renegotiating our vegan diet terms to allow eggs. They’re so versatile, quick to make, easy to find in restaurants, and cheap. But we couldn’t bring ourselves to do it.

Once I found the chickpea flour, I knew our dilemma would be solved. My goal was to create a delicious vegan breakfast scramble that would power our athletic endeavors and also come together quickly. 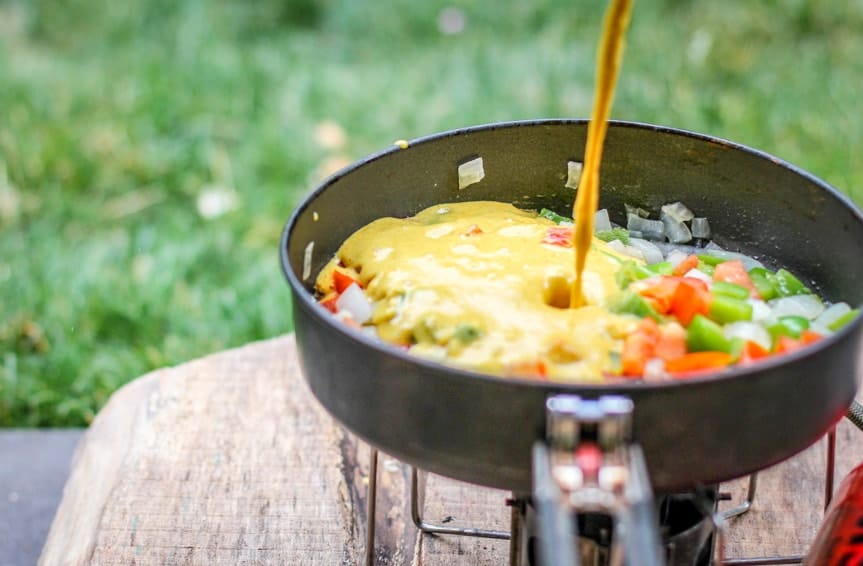 I stuck with the basics for this recipe, using onions, peppers, and a tomato for my veggies. Once those were cooked, I poured in my chickpea “egg” dough and a few minutes later, our vegan breakfast scramble was ready!

This recipe uses what may be a few new-to-you ingredients. First up is aquafaba. What the heck is that? Well, you know that liquid you dump into the bushes when you open a can of chickpeas? That’s aquafaba (bean juice, literally translated!) and this magical substance acts just like egg whites. I’m talking meringues, fluffy pancakes, mousse, and pillowy vegan breakfast scrambles.
Next, we have nutritional yeast, affectionately known as “nooch.” This is a vegan pantry staple, as it gives a cheesy flavor in dishes, plus it’s packed with B vitamins.
And last, but not least is kala namak, or black salt, new to me since my veggie scramble making days. This pungent salt is great to use in vegan egg remixes due to its high content of sulfur resembling the smell of eggs. Don’t buy it at the expensive vegan store like I did. Instead, head to your nearest Middle Eastern market and purchase it there for a fraction of what I paid.

One more thing I’ll leave you with is that these are not eggs. On my first go, I had the expectation that they should taste just like the scrambled eggs I’d eat in during my pre-vegan days. They don’t, but they’re a fantastic replacement. 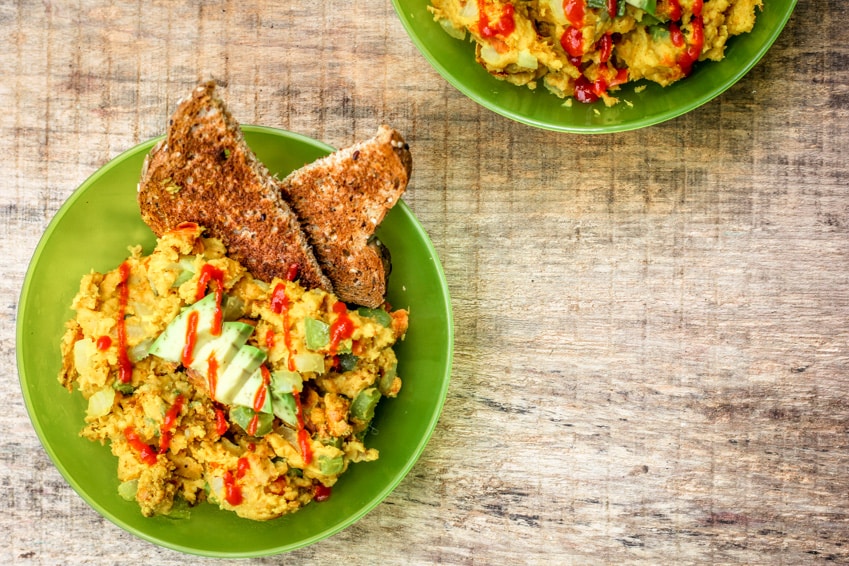 * Aquafaba: This is the liquid that canned chickpeas come packed in. Reserve 3 tablespoons for this recipe when draining the can.
** Nutritional Yeast: This is a deactivated yeast that brings a cheesy flavor to dishes. We've recently seen our Trader Joe's start carrying it, but it can also be found at Whole Foods, natural grocery stores, or online.
*** Kala Namak: Black salt. This will add an "eggy" flavor to the dish, but is optional. Find it at Middle Eastern or Indian grocers or online.

Calories: 306kcal
*Nutrition is an estimate based on information provided by a third-party nutrition calculator 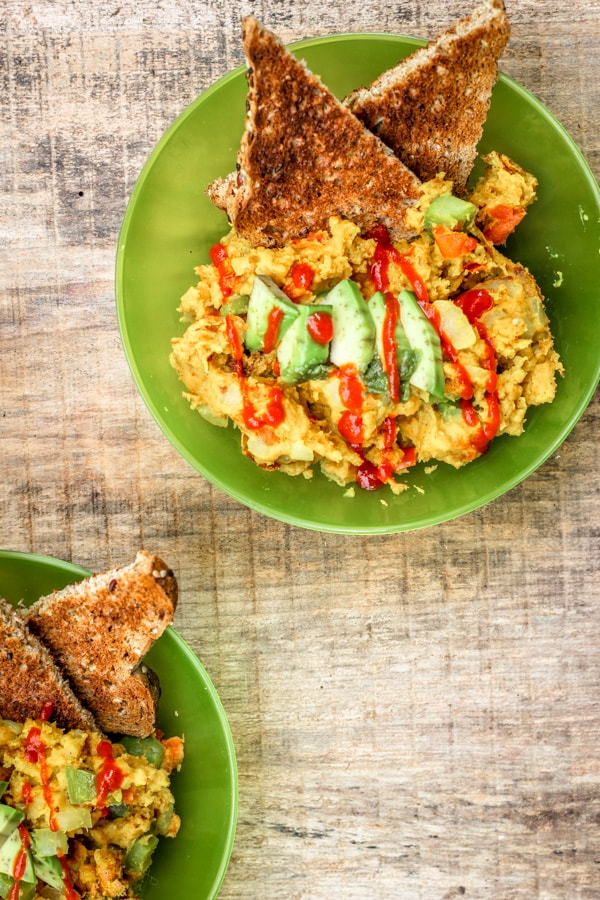 Jen Sotolongo lives for adventure and food. Most recently, she returned from a two-year bicycle tour across Europe and South America with her dog and partner, otherwise, you can find her running long distances in the woods. When she’s not outdoors, she is crafting culinary delight in her kitchen, wherever that may be. She is a blogger and photographer at Long Haul Trekkers. Follow along @longhaultrekkers.
FOTG Community

Join the Fresh Off the Grid community by sharing your favorite camping recipes!