Pad Thai while camping? It’s easier than you think! We made this recipe using just a standard camp stove and it was so simple and delicious! 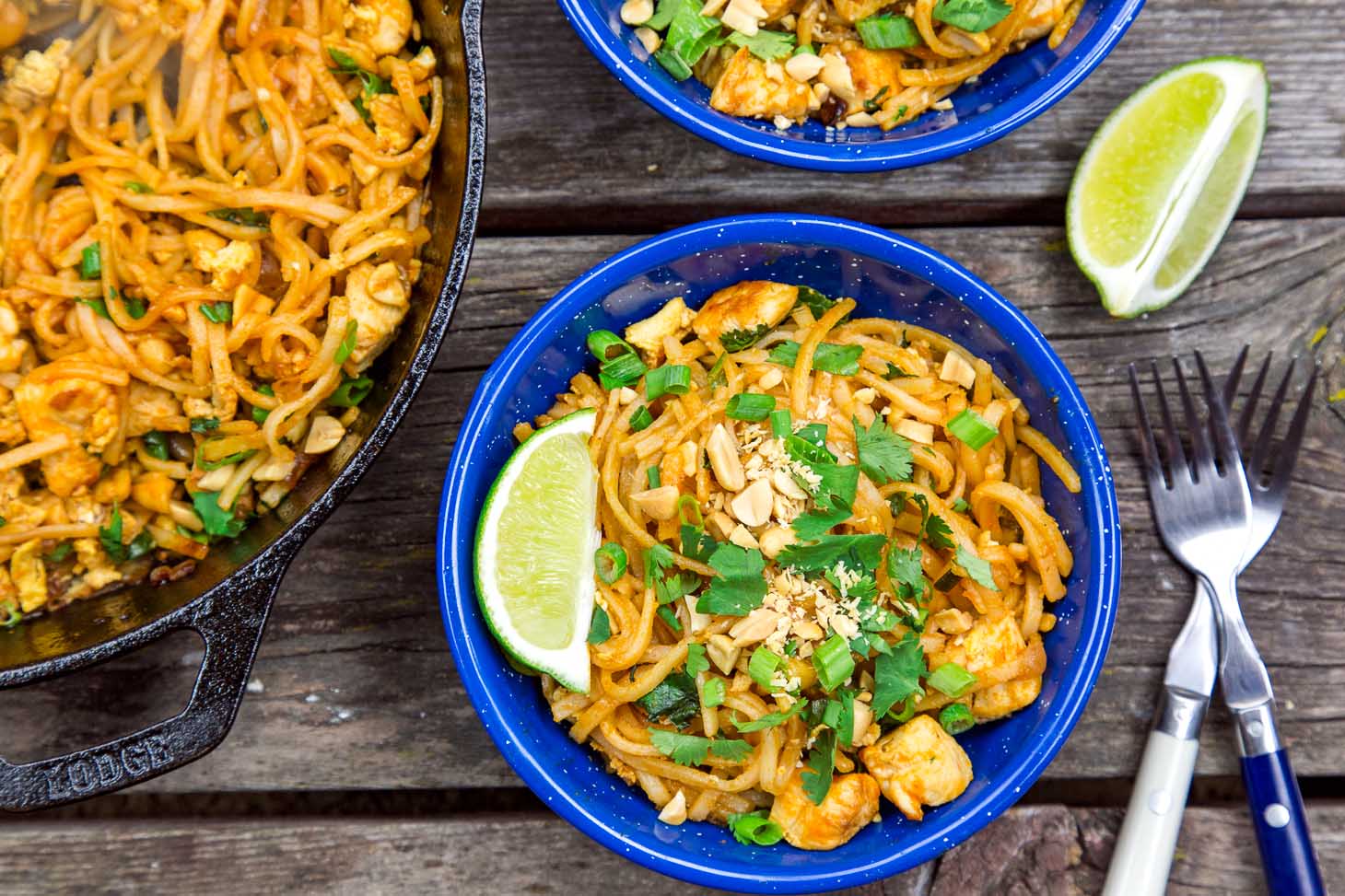 Up until now, our Pad Thai consumption had been limited to going to Thai restaurants. It was sort of a specialty dish we’d only get when we’re eating out. We’d never make it at home, and we’d definitely never think to make it at a campsite.

But all that changed when we started going to a local Thai food truck for our Friday date night (StirFriday for any Archer fans out there!) Inside the food truck, crammed into a tiny kitchen with just two burners to work with, was this young lady who was whipping up all sorts of noodle dishes to order. There she was, making these incredible tasting Thai noodles with just two burners! “This could totally be a camping recipe,” we thought. So we tried it out and came up with this camping-approved Chicken Pad Thai. Here are the main key concepts.

The recipe can be made with either a one or two burner stove, but you will need a pot to cook the noodles and a pan large enough to hold all the chicken and the finished noodles. We used a cast iron skillet which worked alright, but it would have been better if it were a non-stick pan – particularly for the scrambled egg part.

The first step is to bring the pot of water to a boil. Once you have a nice rolling boil, turn the heat off, and drop in your noodles (we used these). Try to keep the noodles together in a bundle when dropping them in (aka don’t scatter them all over the place). That will just sit there and cook over the next 8-10 minutes while you are cooking all the other ingredients. If you’re using a one burner stove, just take the pot off and set it to the side. If you’re using a double burner, move over to burner two and start heating your skillet.

In a well-oiled skillet, you’ll cook the chicken and onions. Once they’re starting to look properly browned, turn the heat to low and push the chicken to one side. Then dump in your beaten eggs and scramble using a fork or spatula. Once the eggs begin to firm up, mix them together with the chicken. 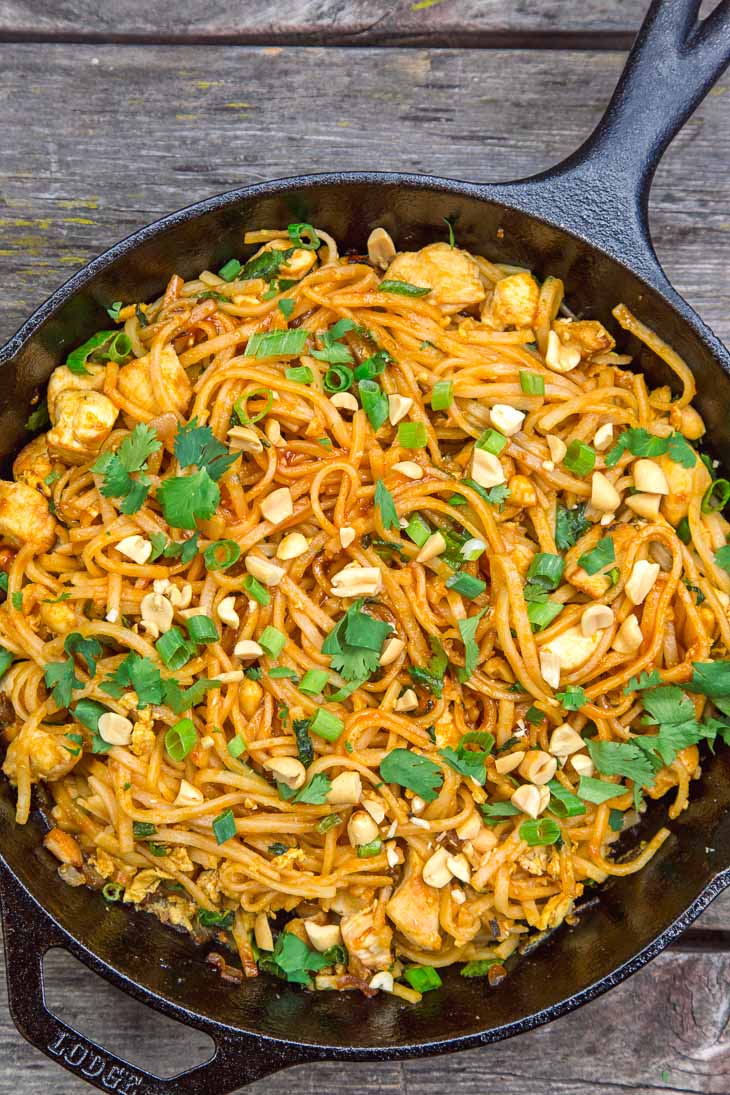 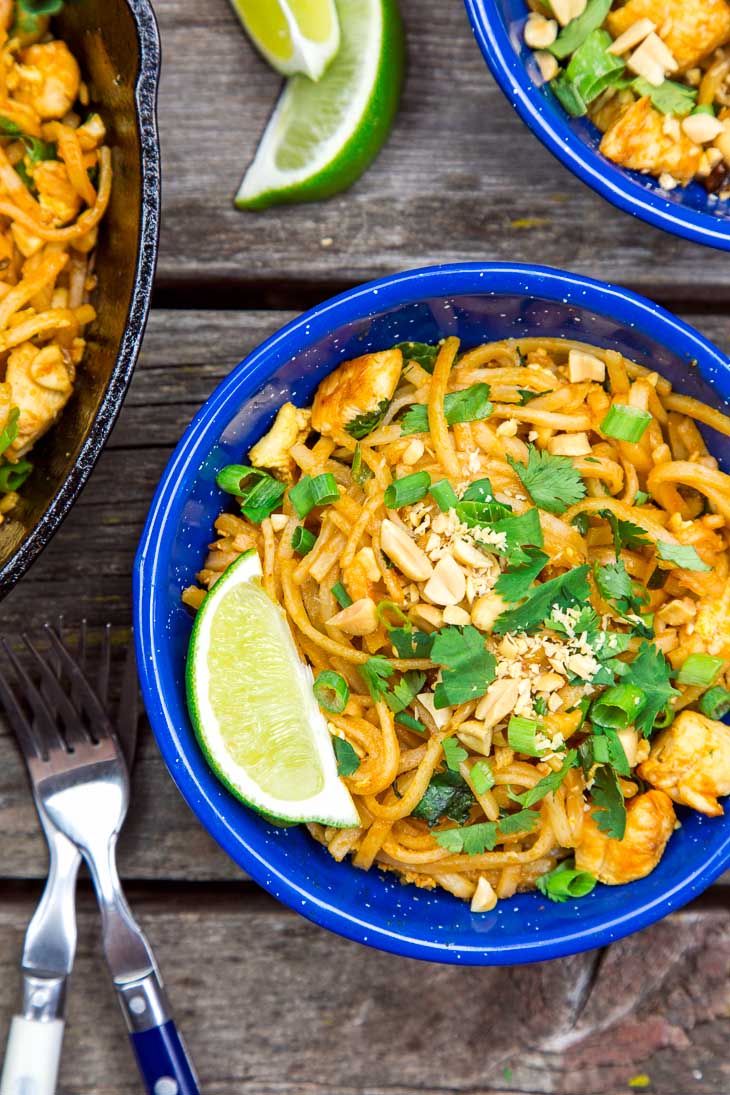 All of that should have taken about 8-10 minutes, so your noodles should be just about ready. So with a pair of tongs, lift the noodles out and place them in the skillet with the chicken. It’s fine if they’re still a little wet still as it will add to the sauce.

With noodles, chicken, onions, and eggs combined, now is the time to add your Pad Thai sauce. If you want to make your own at home and bring it with you, we have a recipe below. But if you just want to pick up some from the store that’s fine too!

Toss it all together, top with sliced green onions, cilantro, and peanuts. And that’s it! You’ve got a quick and easy Pad Thai that takes only about 15 minutes of active cooking.

So if you want to try something different and spice up the menu for your next car camping trip, give this Pad Thai recipe a try! 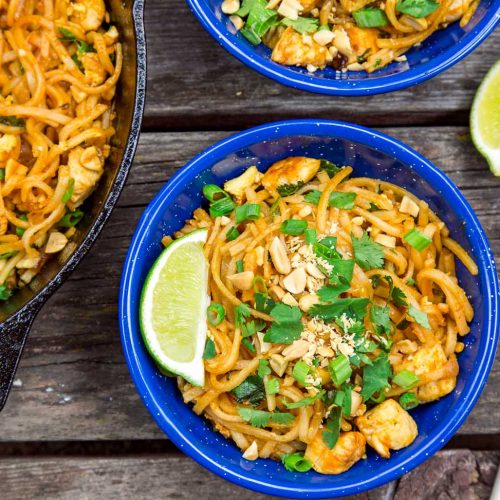 This chicken pad thai is easy to make on either a one or two-burner camping stove. Make the pad thai sauce at home before your trip, or use store-bought sauce to keep things simple!
Author: Fresh Off The Grid
4.63 from 8 votes
Print Pin Rate
Prep Time: 5 minutes
Cook Time: 15 minutes
Total Time: 20 minutes
2 servings

Calories: 571kcal | Carbohydrates: 31g | Protein: 42g | Fat: 33g
*Nutrition is an estimate based on information provided by a third-party nutrition calculator
Main Course
Camping
camping food, chicken
Share your meal with us!When you make this recipe, let us know by tagging @FreshOffTheGrid in your post or stories. We love seeing what our readers cook up!

We're Megan and Michael and we love cooking outdoors! 🏕🔥 We started Fresh Off The Grid in 2015 as a place to share our favorite camping and backpacking recipes. Our goal is to make it easy for you to enjoy great food in the great outdoors. We are currently living “on the road” full time traveling the country in our DIY campervan.