Savory bacon, caramelized onions, and crispy shredded Brussels sprouts, this three-ingredient side dish is one of the easiest (and most satisfying) sides you will ever make!

Food bloggers always make these bold claims like: “This recipe will change your mind about Brussels sprouts!” But it’s 2021. Everyone already loves Brussels sprouts. Nobody needs to be convinced anymore. They’re amazing. We’re into it. And that’s why you’ll love this recipe, too.

When it comes to making a camping side dish, they don’t get much easier than this one. All you need is three ingredients: bacon, onions, and Brussels sprouts. And the cooking method is dead simple too, allowing you to divert your focus to other parts of the meal.

We made this brussel sprout dish as part of our larger slate of camping Thanksgiving meals, but it is absolutely perfect for any time of year.

Why We Love it:

Want to make a brussel sprout side dish that you already know your friends and family love (because they love brussels sprouts), then this one is for you!

Bacon: If you have a Trader Joe’s in your area, we highly suggest their Black Forest Bacon. It’s our favorite bacon product. If not, see if the meat counter at your local grocery store offers bacon by the pound, which is often better than the prepackaged stuff. But if prepackaged is your only option, look for thick-sliced nitrate-free bacon.

Onion: One small to medium or half a large yellow onion–cut into quarters pole to pole and then sliced into quarter moons.

Brussels sprouts: Inspect your Brussel sprouts in the store for any signs of browning. Especially the ones sold in plastic bags or mesh bundles. Grocery stores love to push nearly expired sprouts. If you can find sprouts on the stalk, those are usually the best but don’t bring the whole thing with you camping. Remove the sprouts yourself at home and bring just what you need.

Cast Iron Skillet: Can you make this with stainless steel or a nonstick pan?… possibly. But what we love about cast iron is the heat retention. Once the dish is done, the skillet will stay warm for quite some time, making it a perfect serving plate. Plus we find that a cast iron skillet does a great job helping the Brussels sprouts brown and crisp.

Slotted Spatula: You will want this for removing the bacon bits from the pan while allowing as much of the rendered fat to drain off.

How to Make Shaved Brussels  Sprouts and Bacon – Step by Step

Start off by prepping your ingredients. Thinly slice your Brussels sprouts, discarding the tough bottoms. Dice the onion. Cut your bacon into pieces. We usually go once down the middle and then cut into ¼” to ½” pieces.

When cooking bacon, you want to start with a cold pan—no need to pre-heat. The gradual rise in temperature allows for the bacon to render more of its fat out. So place the bacon pieces into a cold skillet and then place the skillet over your camp stove or campfire.

As the bacon starts to heat up, it will start to crackle. Use your spatula to gently move the pieces around to ensure everything gets evenly cooked. Because the bacon is pre-cut, you will get a lot of rendered fat in the pan, which is great. You will be using that for the onions and sprouts.

Once the bacon bites look almost but not quite done, it’s time for them to come out. There is a lot of carry-over heat in the oil and the bacon will continue to cook after you remove it.

Using your slotted spatula, remove all the bacon bites and place them on a paper towel-lined plate off to the side.

You can now add your onions. Move them around so they are evenly coated with the remaining bacon fat, and allow to cook until they become semi-translucent. Stirring occasionally to make sure everything is evenly cooked.

Finally, add in the Brussels sprouts. Same thing here, move them around to evenly coat them and allow to cook until you start to pick up a little browning here and there. Stir occasionally to ensure nothing burns. Once you like the amount of browning you’re seeing, cut the heat, and add the bacon bits back in stir to combine.

Depending on the type of bacon you used, this meal might be salty enough. But if not, this is the time to add salt to taste. 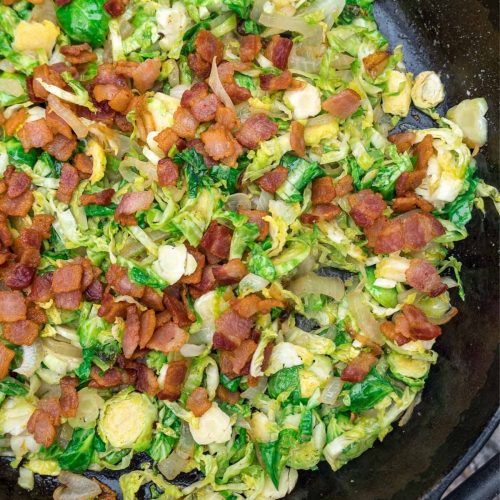 Savory bacon and slightly crisp shredded Brussels sprouts, this three-ingredient dish is one of the easiest (and most satisfying!) side dishes you'll ever make.
Author: Fresh Off The Grid
No ratings yet
Print Pin Rate SaveSaved!
Prep Time: 10 minutes
Cook Time: 20 minutes
Total Time: 30 minutes
4 servings