Apples, mulling spices, and a dash of warming bourbon, this spiked apple cider recipe is a cold-weather classic. Whether you’re gathered around a campfire or hunkered down for a cozy cabin weekend, this autumn cocktail will put you in a warm and fuzzy mood all night long.

We’re always excited about the return of the “warm cocktail” season. There is nothing better than wrapping up in a blanket next to a fire and sipping a hot, preferable alcoholic, beverage.

This bourbon spiked apple cider is one of our favorite cold-weather drinks. Especially during the fall when apple and apple-related products are in abundance. It just doesn’t feel like fall until we’ve had our first taste of apple cider.

This is also a great cocktail to make for groups because it can be made as one large batch. So if you’re planning a group outing, a camping Thanksgiving dinner, or just want something to get into the spirit of the season, then give this easy spiked apple cider whiskey cocktail is a great recipe to try.

Unfiltered Apple Juice: Not to be confused with spiced cider, which already has all the spices blended into it. Unfiltered apple juice is just cloudy looking apple juice. The ingredient list should say apple juice (and maybe water), but nothing else.

Cinnamon Sticks: Whole cinnamon sticks can be expensive at conventional grocery stores. We’ve found Trader Joe’s to have the best prices of all the chain-grocery stores. Many Mexican and Indian grocery stores will have them in bulk for super cheap.

Mulling Spices: You can assemble your own mulling spices using whole cloves, nutmeg, star anise, and allspice, but it can get expensive. We have found many grocery stores sell pre-mixed mulling spice blends, which can be far more affordable.

Orange: Orange in apple cider? Yes! The citric acid cuts through the sweetness of the cider and really brightens the drink up a lot.

Whiskey: We used bourbon for this recipe but rye bourbon, Irish whiskey, or Canadian whiskey would all work just fine. Use a good drinkable bottle, but not too good. There are a lot of flavors going on in this cocktail and a really nice whiskey will get lost in the sweetness and spices. Our go-to bourbon is Bulliet Bourbon. It’s relatively cheap and dangerously drinkable.

Insluated Mug: While the classic blue enamel camping mugs look cool in photos (guilty!), they don’t do a great job insulating from the heat, so your mug can be too hot to hold while your drink gets too cold to enjoy. An insulating mug would be a better choice. We recently picked up these Hydroflask insulated mugs and love them.

Pot: The size of the pot depends on the size of your group. Since it’s just the two of us, we use a small saucepan. If cooking over a campfire, a Dutch oven or large pot would be a good bet too.

Strainer: Unless you want to be drinking around floating cloves and star anise all night, then it’s a smart move to bring a strainer.

Ladle: If you’re using a large pot that would be too cumbersome to pour individual mugs, then you will want to ladle to the liquid out and into the strainer.

Making spiked apple cider yourself is super easy. Watch this step-by-step video to see how to do it!

In a pot or saucepan, add your unfiltered apple juice, cinnamon sticks, mulling spices, and orange juice. Bring the liquid to a boil and then reduce down to a simmer.

Simmer for at least 10 minutes to allow the flavors to mingle and get to know each other. Using a spoon, taste the cider to see if the spice level is where you want it. Once it’s tasting good to you, pour the cider through a strainer into individual mugs. If there’s leftover cider, strain out the remaining liquid to remove the spices. This will prevent the cider from over steeping.

The very last step is to add your desired amount of whiskey to the mug and enjoy!

↠ Picking up pre-mixed mulling spices is definitely the most economical way to make this recipe.

↠ If you want to try a “spicier” version of this drink, add a few thin slices of fresh ginger in with the mulling spices.

↠ If you find apple cider be so sweet that it hurts your teeth, then you can dilute the cider down with a little water. Add the water before you start simmering, so the water will absorb some of the flavors from the spices.

↠ The longer you simmer the cider with the mulling spices the more potent they will taste. You want them to be pronounced, but not overwhelming. So once you’ve reached your preferred level of spice, serve immediately. If there’s extra cider leftover, strain out the remaining spices to prevent the remaining cider from becoming over-steeped.

↠ Add the bourbon last! We’ve seen a handful of recipes online that call for you to add the whiskey while the cider simmering. That’s perfectly good alcohol you’re burning off! Keep the booze from evaporating by adding it to your mugs after you pour the cider in.

↠ Make it ahead of time if you’d like. This recipe can be made at home ahead of time. Let the cider cool and then store in a tightly sealed container in your cooler. Then, simply heat it up on your stove or campfire.

Whether you’re camping outside or just camped out in your living room, this easy-to-make spiked apple cider recipe will be sure to get you into that Fall feeling. 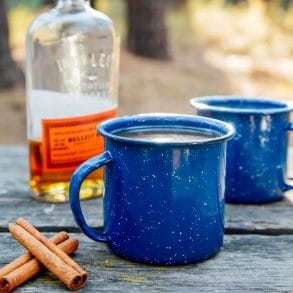 Apples, mulling spices, and a dash of warming bourbon, this spiked apple cider recipe is a cold-weather classic. Whether you’re gathered around a campfire or hunkered down for a cozy cabin weekend, this autumn cocktail will put you in a warm and fuzzy mood all night long.
Author: Fresh Off The Grid
4.53 from 23 votes
Print Pin Rate SaveSaved!
Prep Time: 1 minute
Cook Time: 10 minutes
Total Time: 10 minutes
2 drinks

Calories: 277kcal | Carbohydrates: 43g
*Nutrition is an estimate based on information provided by a third-party nutrition calculator
Drinks
American

This post was originally published in September 2015 and last updated November 2019 with more detailed instructions and video.