Make pizza night a new camping tradition! Take your camp cooking skills to the next level with this campfire pizza recipe. 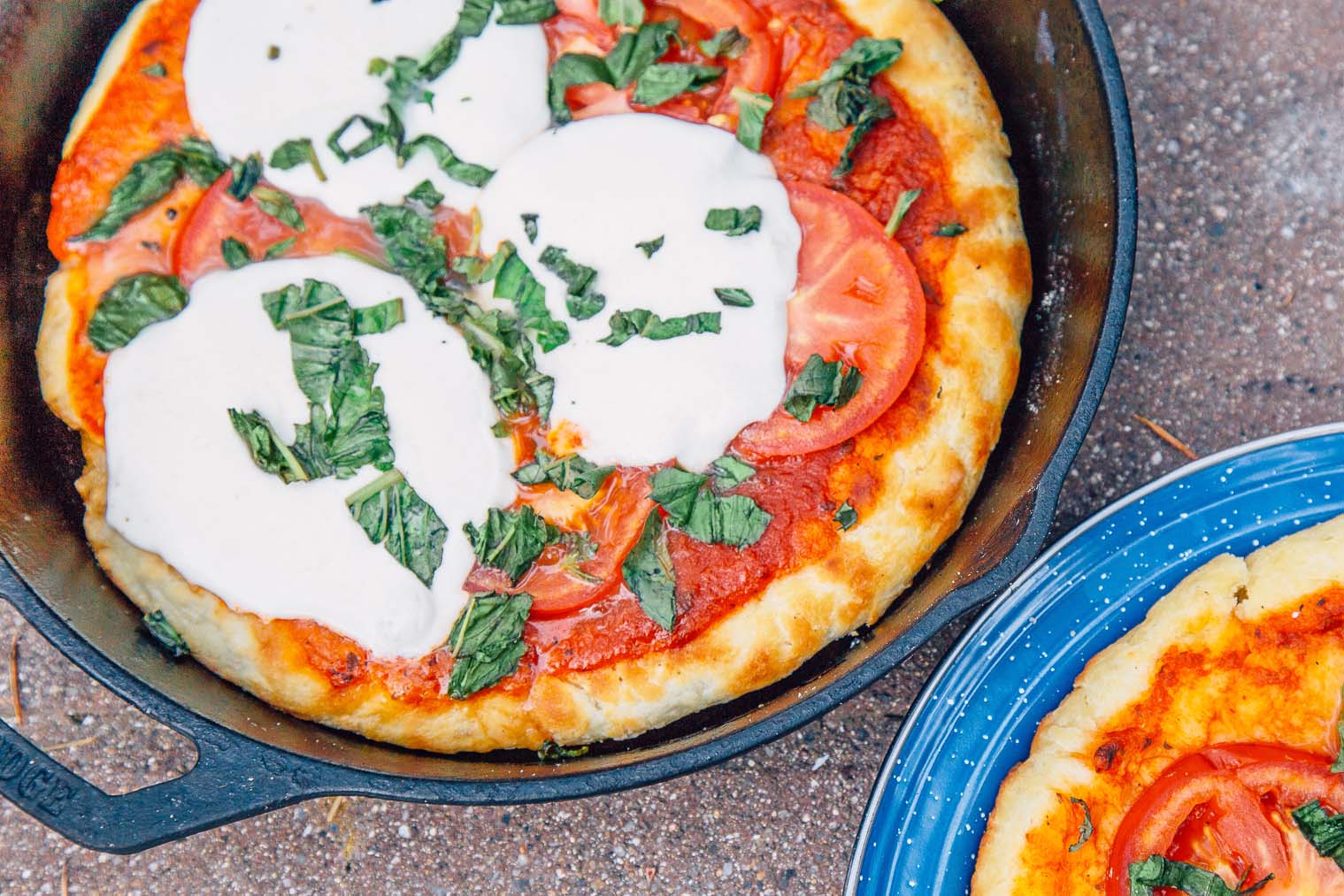 We used to think pizza was completely incompatible with camp cooking. Despite being one of the foods we find ourselves constantly craving, just the concept of trying to make pizza at a campsite seemed entirely impossible to us. You had to make the dough, you needed to have an oven, it just didn’t seem like it was going to work.

But Michael’s East Coast love for pizza runs deep, and where there is a will, there is a way. So we set out to make a camping-friendly pizza recipe that would allow us to achieve our dream of enjoying hot pizza and cold beer at a campsite. (Can you possibly imagine anything more perfect? Of course you can’t!)

However, our quest was fraught with challenges. Not only were we trying to develop a way to make pizza from scratch… at a campsite…. without an oven, but the process had to be simple enough for us to actually want to make it. (Nothing deters us from a recipe like overly-complicated instruction or specialty single-use pieces of equipment!) This had to be simple, easy, and delicious.

The first major hurdle was the dough. We are wary of baking and when we see recipes that call for yeast, we usually run away and hide. But we decided to face our fears on this one, and to our surprise, it was a lot easier than we could have ever imagined. All we had to do was combine some flour, water and a packet of rapid yeast into a pot. Knead it around a couple of times and then leave it alone for 20 minutes. We can totally do that, and we guarantee you can too! 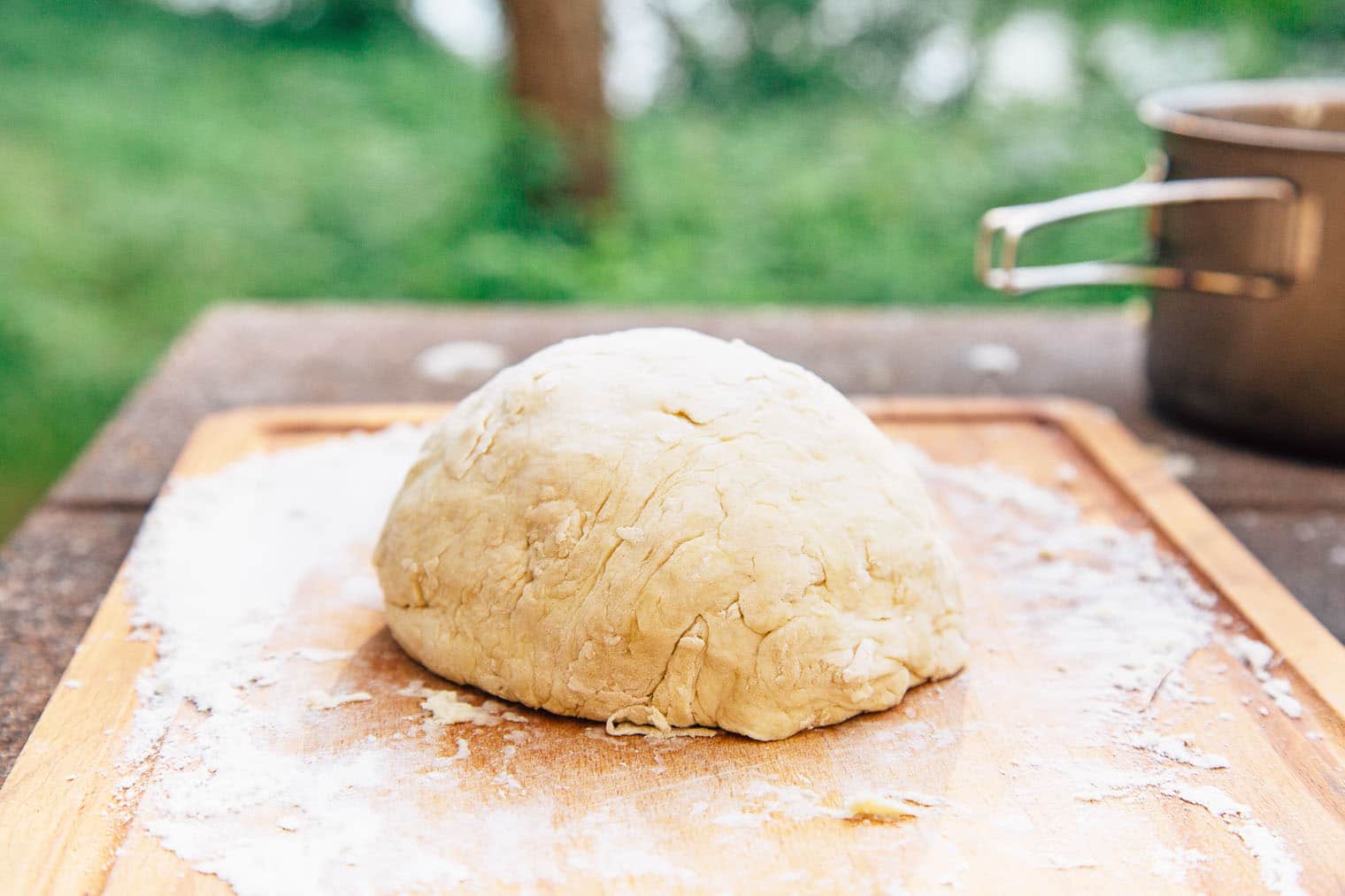 The next challenge was the actual cooking process. Obviously, every pizza recipe calls for an oven – which most people don’t carry with them while camping. But perhaps we could figure out a way to grill it? Back when we lived in LA, we would make grilled pizzas on a small hibachi stove outside to avoid overheating our apartment (we didn’t have A/C). The only problem with this approach at a campsite is fire ring needs to have a proper grate on it, which, in our experience, is far from a guarantee.

So we developed this recipe to be done in a cast iron skillet instead. By using cast iron, it allows us to cook over a campfire if there’s a grate, or, cook using our propane-powered camp stove.

Now there are a couple tricks to cooking an amazing pizza in a cast iron skillet (which we will outline thoroughly in the recipe below), but here’s general overview.

To shape the dough in the pan, place one of the dough halves into the pan and then press the dough outwards to form the crust. Once you’ve formed your dough in the pan, you’ll want to generate even heat across the entire surface of the pan. This is easy if you’re sticking your cast iron over a campfire because the broad heat coming off the fire encompasses the whole skillet. If you’re cooking over propane camp stove, you’ll want to move the pan around over the heat source so all sides are hot. (Cast iron retains heat like crazy, so rotate the edges of the pan over the heat source to let the whole thing heat up.)

Once the bottom of your dough starts to toast up and turn golden brown, you’ll want to remove the entire pan from the heat. The reason we suggest taking it off the heat is that things start moving very quickly at this point and if you’re not careful you can end up burning the dough. Removing the pan from the heat buys you some time to get your toppings in order.

If your toppings have a lot of moisture (i.e. mozzarella, heirloom tomatoes, spinach, etc) you’ll want to remove the cover half way through so the steam can escape. Basically, you’re just trying to melt the cheese, so once that’s done, you can remove the cover, so you’re not left with soggy a soggy pizza.

Once the bottom is toasted to your liking, remove the skillet from heat and transfer to a plate. It’s that simple! At this point, we’re usually torn between eating the first pizza and reloading for the second pizza. Repeat, repeat, repeat.

You don’t need a $300 portable pizza oven to make great pizza while camping. If you follow this recipe, all you will need is a good cast iron skillet. So what are you waiting for? It’s pizza time!

The recipe that follows is for a simple pizza crust cooked over a campfire, and will make 2, 10" pizzas. You can add whatever toppings your heart desires. Check out our blog post for our favorites!
Author: Fresh Off the Grid
4.69 from 29 votes
Print Pin Rate SaveSaved!
Prep Time: 25 minutes
Cook Time: 15 minutes
Total Time: 40 minutes
2 10" pizzas 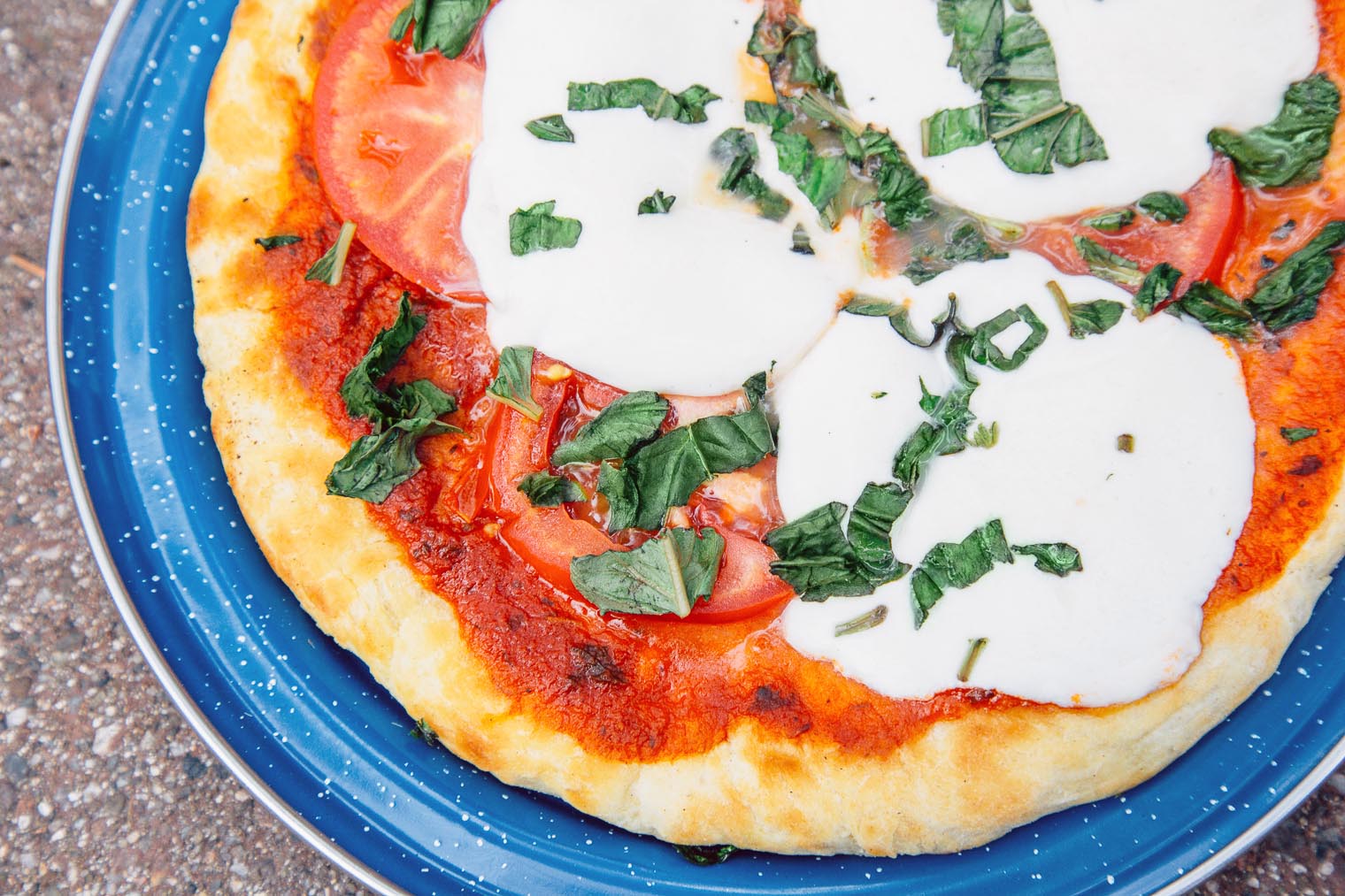 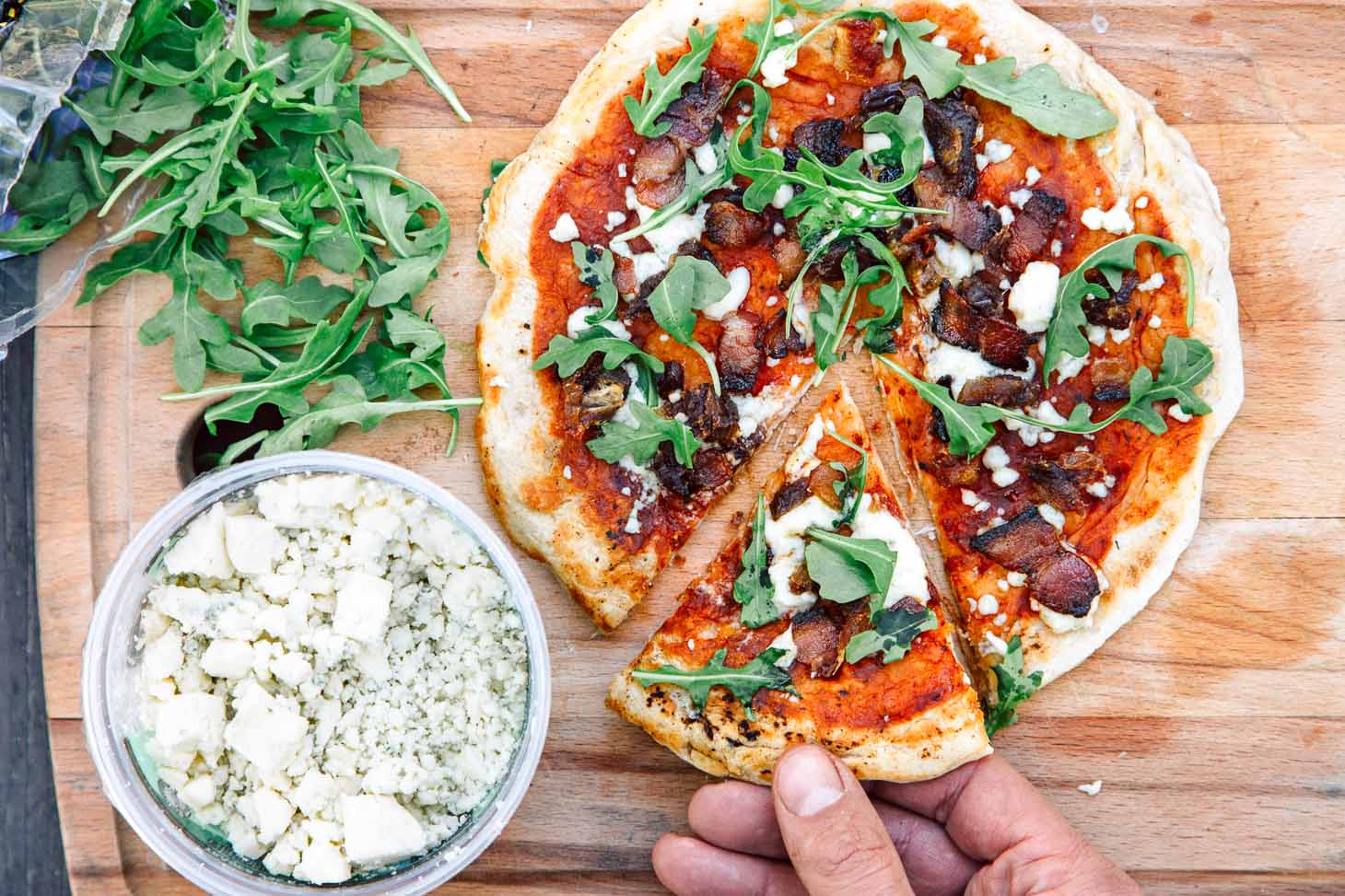 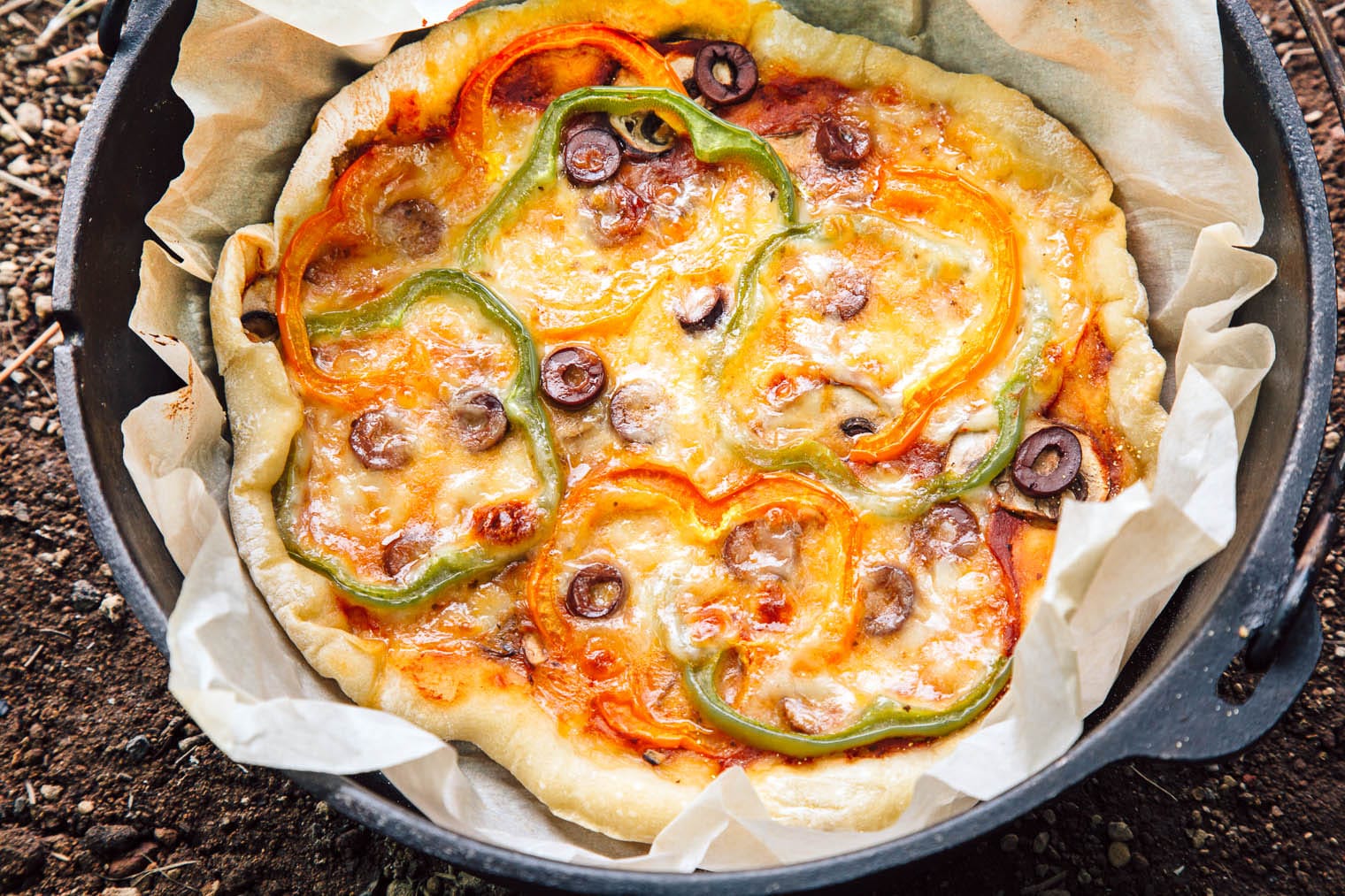