Sweet and savory and oh so delicious, we developed a one-pot version of Chicken Marbella to take on your next backpacking trip. Lightweight, loaded with calories, and bursting with flavor, this is hands down one of the best meals we’ve ever enjoyed in the backcountry. 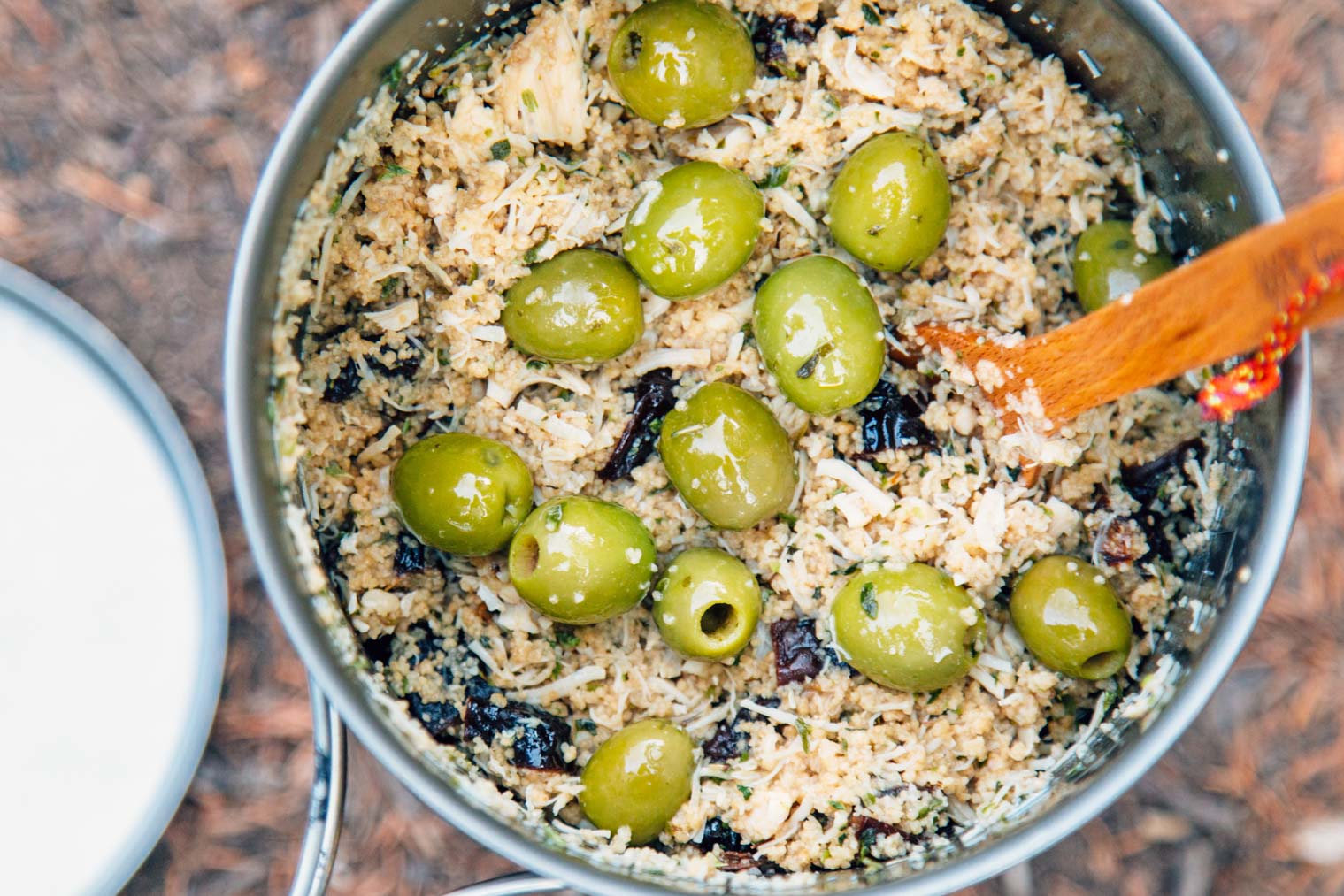 Chicken Marbella (the olive and prune baked chicken dish) was first published in The Silver Palate Cookbook in 1982 and has been wildly popular ever since then. It’s a classic summertime dish in the van Vliet household, making about a dozen appearances from Memorial Day to Labor Day. If there’s a picnic or BBQ or pool party, there’s a good chance this will be served.

These days, food bloggers have filled the internet with their own, slightly altered, version of the much-beloved recipe. However, after doing a thorough Google search, we’ve concluded that this is the first ever version of the recipe to be developed specifically for backpacking. #First! 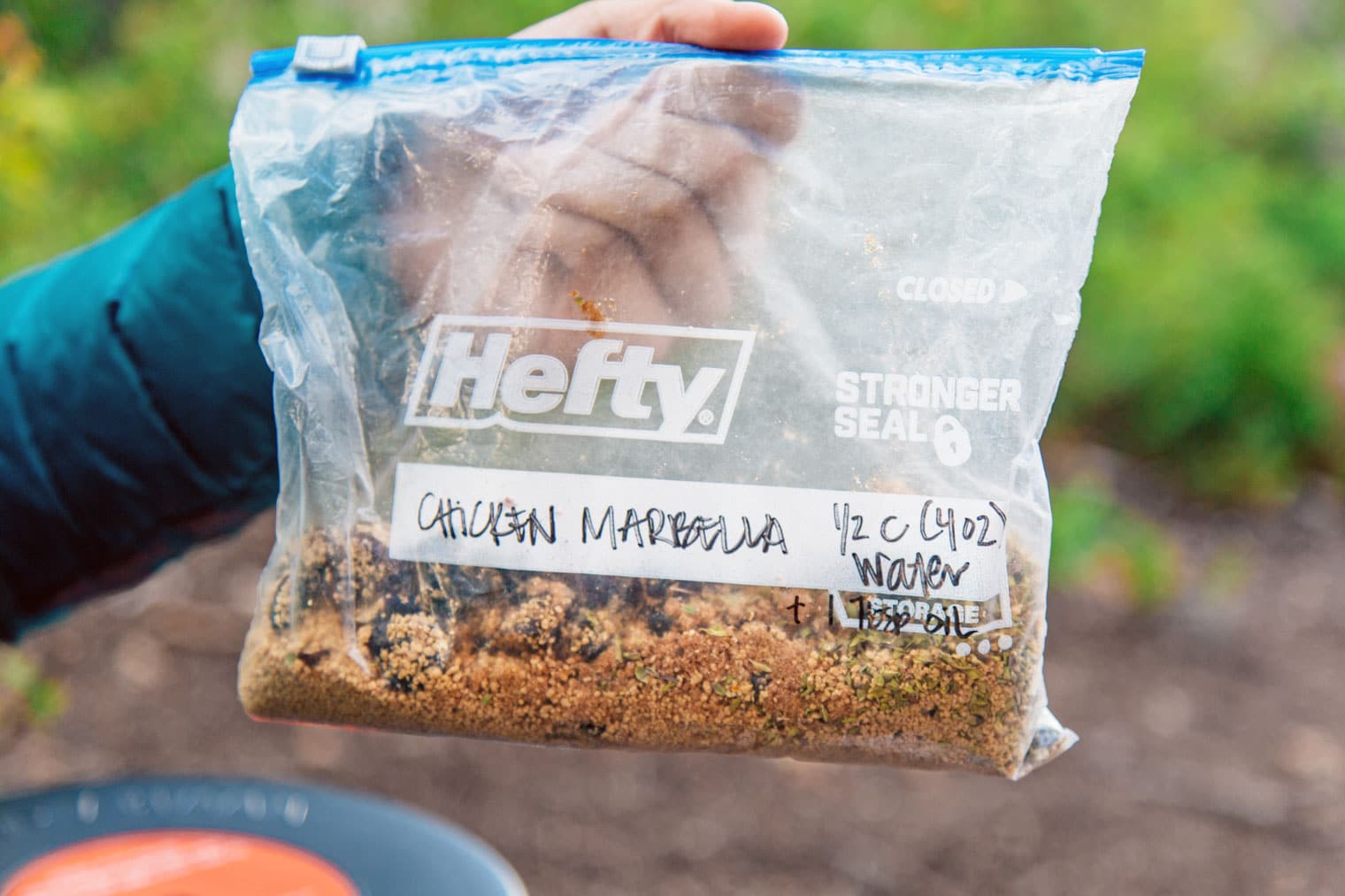 In order to streamline this meal for backcountry camping, we had to seriously rework the recipe. We wanted to keep that mouth-melting sweet and savory flavor of the original, but we were going to have to make some pretty substantial alterations.

The original recipe calls for chicken thighs to be marinated in a refrigerator overnight with white wine, olives, capers, prunes, and a bunch of amazing ingredients. Then, the chicken is supposed to be patted with brown sugar and baked in an oven for an hour. Pretty much none of that is compatible with backpacking. It requires equipment you don’t have, ingredients that need to be refrigerated, and an incredible amount of time. So we developed our version to be super-simplified and hyper-condensed.

We start with a pouch of chunked chicken breast, which is available in most major grocery stores. The pouch is superior to canned chicken because it can be compressed after use and takes up less space in your pack. Obviously, this isn’t an ideal cut of chicken, but if you want shelf-stable, non-freeze dried chicken in the backcountry, this is really your only option. 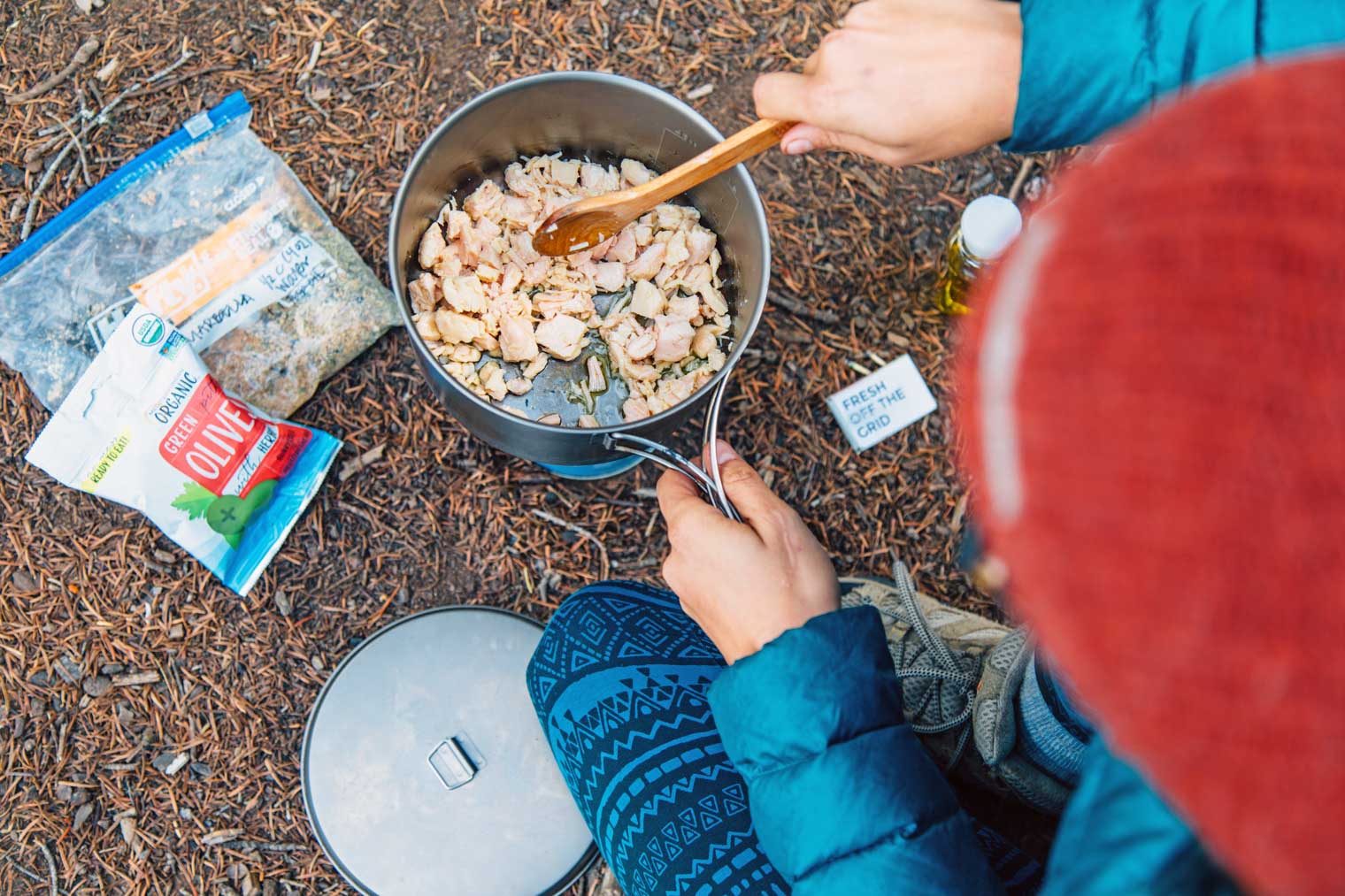 As a totally optional step, we heat up a little oil in our pot and dump in the chicken. Depending on your stove and pot set up, the line between scorched and slightly browned is razor thin. We suggest that you err on the side of caution. The chicken is pre-cooked, so any amount of browning you get is just an added bonus. 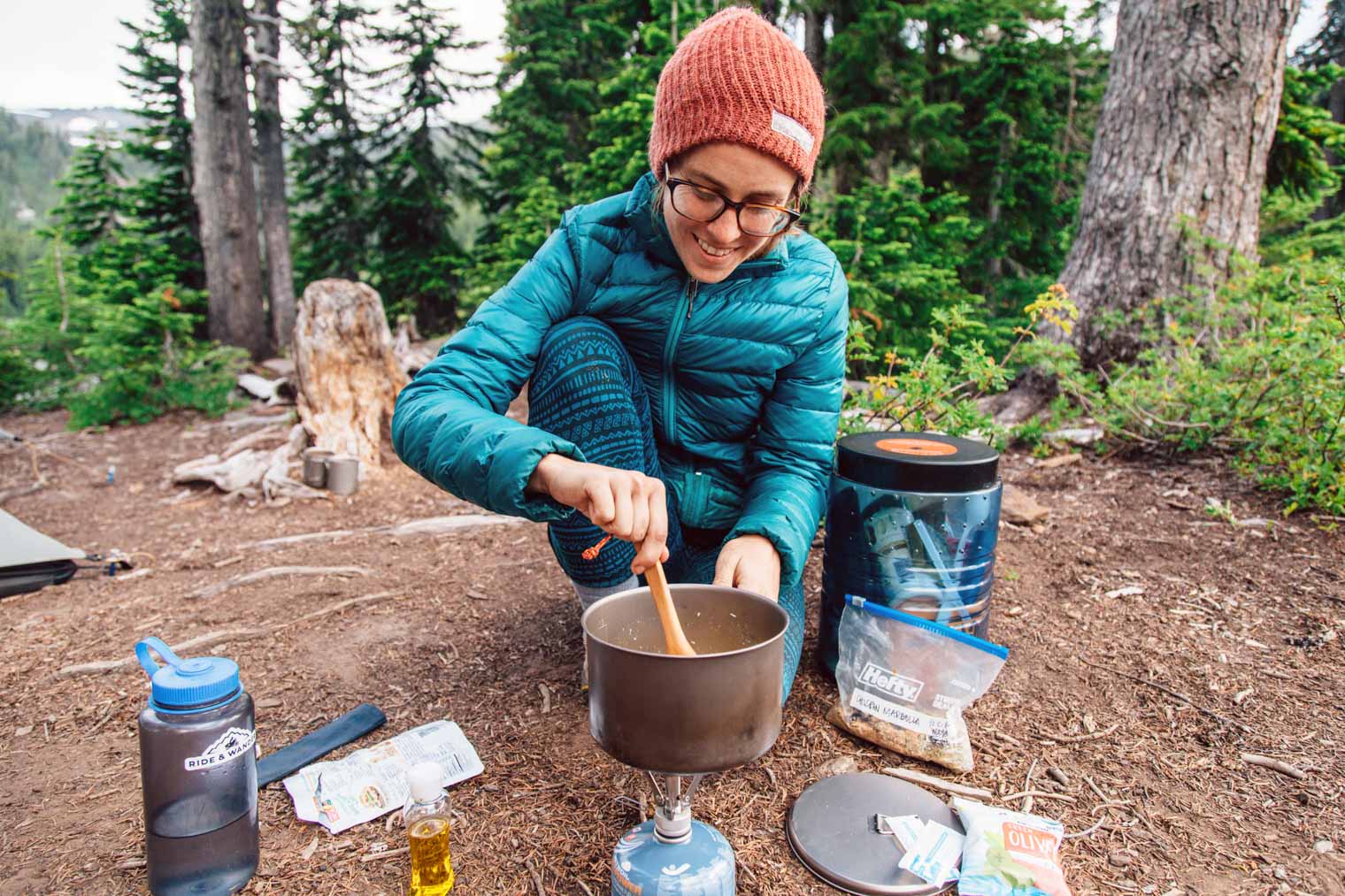 Once the chicken is brown(ish), add water and a broth packet for extra flavor, bring that up to a boil, pour in the couscous, sliced dried prunes, spices, cover, and remove from the heat.

Now here’s the hardest part. The pot is going to start smelling absolutely delicious. Especially, if you’re at the end of long day of hiking, the smell can be intoxicating. But you’ve got to let it sit for at least 5 minutes so the couscous can cook, and then add in the olives and vinegar packets. Once that time has elapsed, you’re “supposed to” fluff the couscous with a fork, but that process is usually accomplished by us wildly digging in.

Unlike other backpacking meals, this recipe doesn’t use any dehydrated ingredients. It also is comprised entirely from whole foods. And with the exception of the chicken pouch and broth, everything is pretty minimally processed. Despite all of that, it’s still incredibly calorie dense and lightweight, while delivering huge amounts of flavor.

If you’re looking to impress your hiking partner or going on a backpacking first date (probably a terrible idea), then this is the meal that will sweep them off their feet… 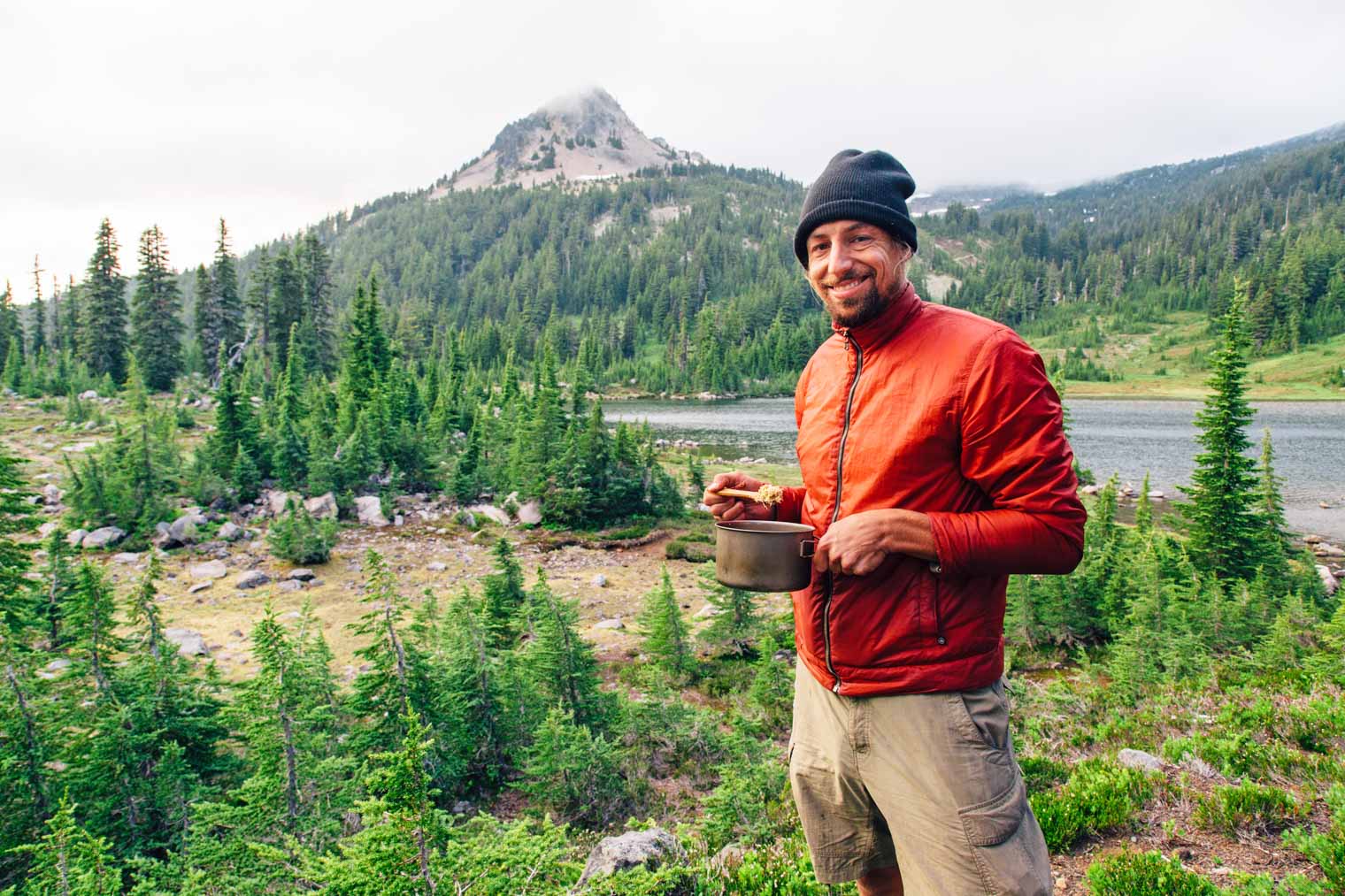 Olive oil: You can pick up individual packets of olive oil from sites like Amazon and Minimus.biz, or you can use small refillable bottles like these to fill up before your trip.
Vinegar packets: Likewise, vinegar packets can be picked up online or packed in refillable bottles.
Broth packets: These are easily found at Trader’s Joes and other grocery stores. They’re usually sold in a cardboard box in sets of 10 or 12.
Olives: There are a few options for pre-packaged olives. We used Mediterranean Organic. We’ve also recently seeing packaged olives at Trader Joe’s. Other brands you could use include Oloves (these chili ones could be fun if you like some heat!) or Crespo. Just make sure you’re picking up the pitted variety.

Calories: 545kcal
*Nutrition is an estimate based on information provided by a third-party nutrition calculator 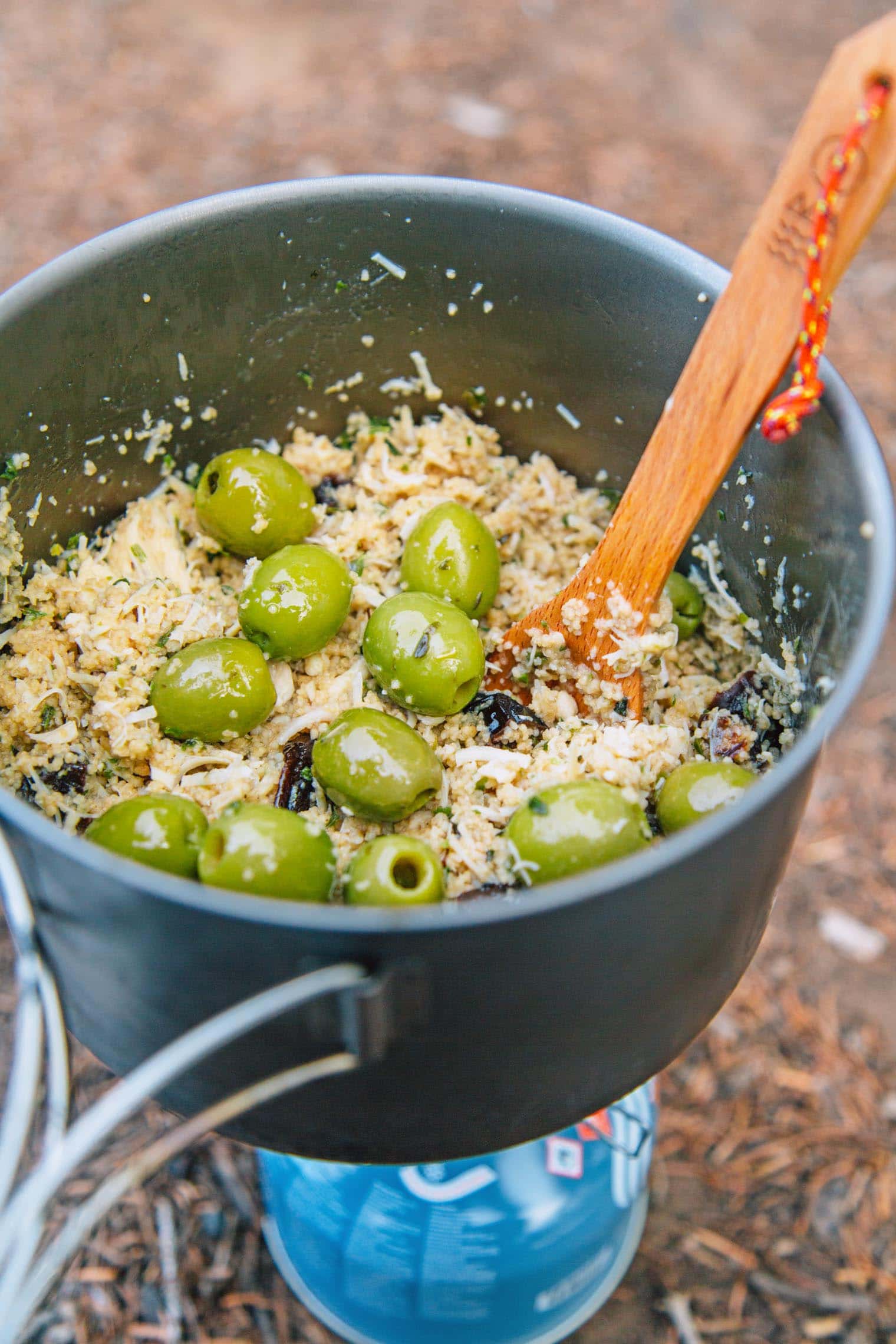