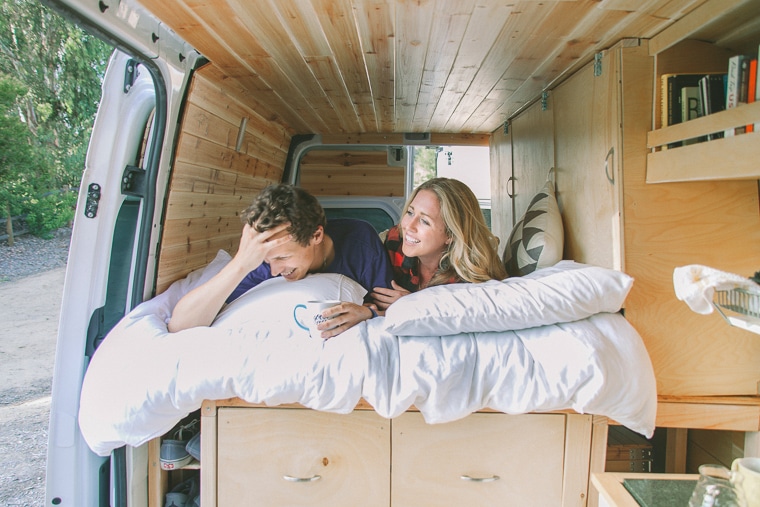 In July 2015, Janna and Johnny sold all their stuff, moved into their custom-built Sprinter van, and hit the road.

#Vanlife on the outside, #Cabinporn on the inside, Janna and Johnny’s rolling home has allowed them to embrace a new nomadic lifestyle. With the simple goal to see as much as they can across the US and Canada, the two plan to immerse themselves in a range of natural and cultural environments. North America is a pretty big place and they want to take a good look at it. We caught up with them to chat about living and cooking on the road.

Tell us a little about your trip and how you came to live on the road?

I grew up playing in the mountains of the Pacific Northwest and Janna was raised in the surf of Kauai, so we both developed an appreciation for the outdoors at a young age. With that comes a sort of wanderlust to go and check out and play in beautiful places, in addition to exposure to a culture of wonderful, free-spirited adventurer types. After vagabonding around through our 20s and camping here and there, we realized that being on the road and living in a van act as the ultimate way to experience, well, everything and anywhere. It didn’t just have to be on weekends or vacations. After living near world-class surf breaks and a month long surf odyssey in Baja, I definitely bought into the romantic dream of van life. So even though we both had fulfilling jobs, lived in a great spot near the beach, traveled and camped around the world, and had great friends close by, we also aspired to break from routine and set out and be more present—with each other and new and old places—and live a truly nourishing, positive lifestyle. Plus, after a few life experiences that reminded me of how fragile life is, I just couldn’t wait any longer to scratch that itch of really want to live the way I dreamt…right now! 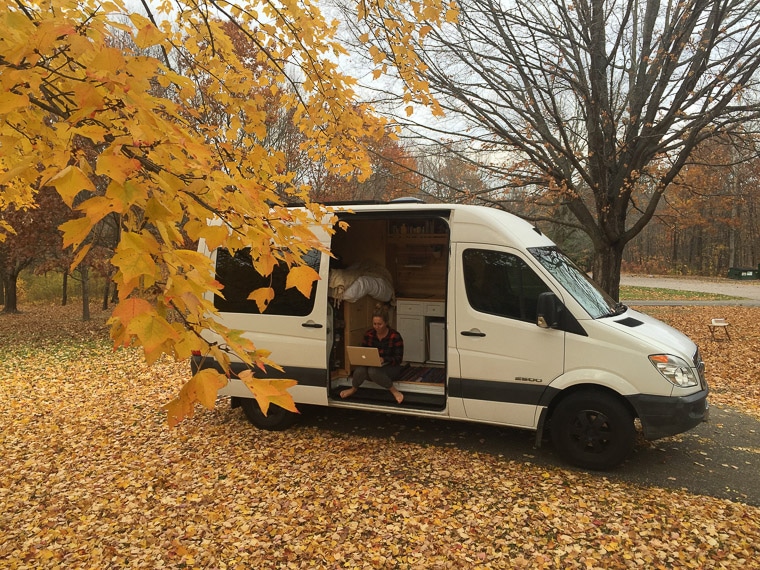 We saved up, scoured the web and researched for the most practical and affordable van to live and travel in, and bought a 2009 Dodge Sprinter 2500 van with only 107,000 miles and spent nights and weekends for three months building it out. The amount of information and inspiration from others who have paved the way and done the very thing we talked about for so long—buying a van, building it out, and traveling around—on the Internet is an amazing community. We feel super grateful for being able to say it’s been the best decision of our lives, and relationship. 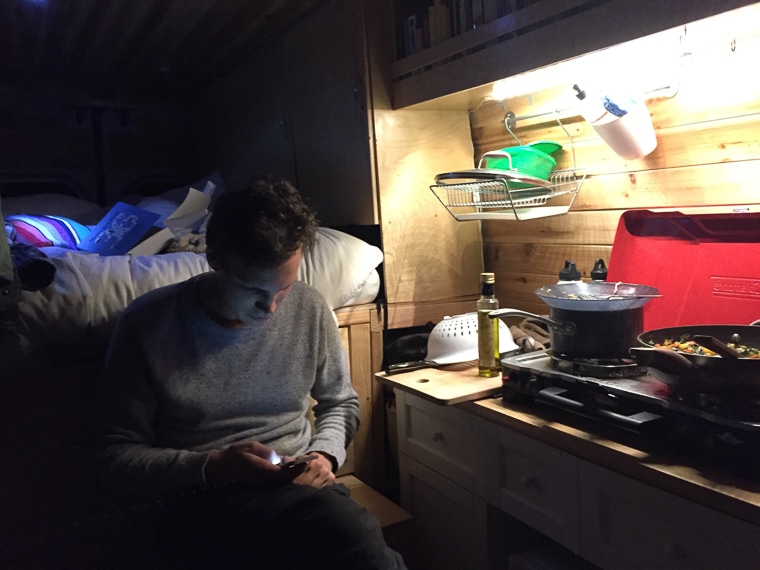 Describe your van kitchen set up

When looking at different designs and blueprints for our van build-out, we prioritized the bed/sleeping arrangement and then the kitchen. So sleep first, food second. Anyway, we totally scored when Janna found a kitchen island with drawers and cupboards on Craigslist that fit our space, which I think was only like 22 inches by 10 inches or something crazy small. Instead of building a kitchen counter of reclaimed wood and having to build drawers, which we learned is really, really hard, we kinda contributed to sustainability and got the kitchen island. We promptly purchased a small sink and cut a hole out on the counter, so we could have a gray water setup. We use our trusty Coleman camping stove, with two propane burners, and have enough counter space to chop veggies and such. And although washing dishes is kind of a pain (when isn’t it, right?), we can still throw our five-gallon water jug up on the counter and wash anything in our little sink. Everything fit and functions perfectly. 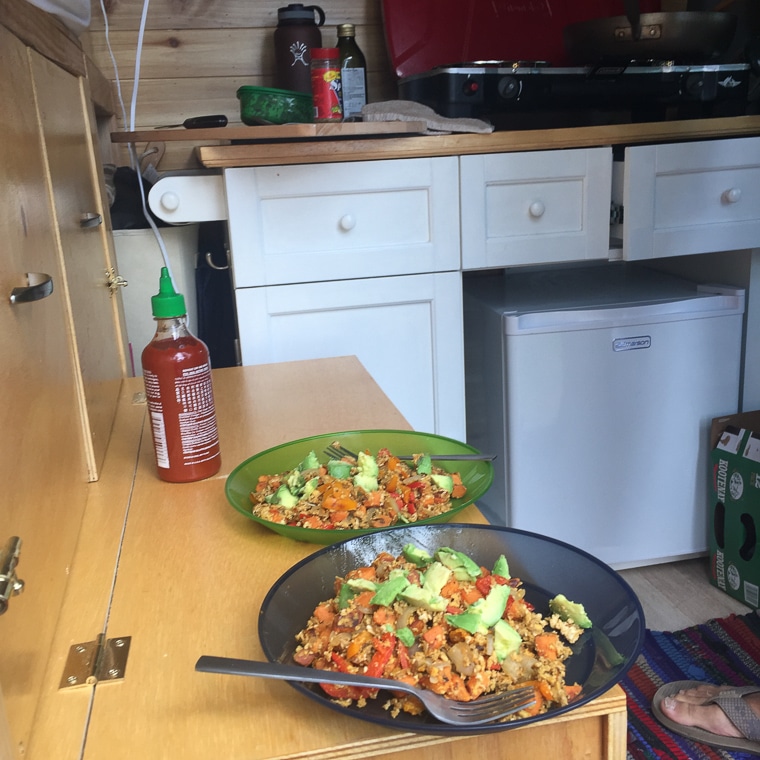 Has your cooking style evolved while on the road?

Absolutely. Not only have we become more resourceful without having an oven or the conveniences of a large kitchen or refrigerator, but we’ve evolved our eating habits to be more nourishing and local since being on the road. I guess you could say our diet has reflected our pace and perspective of being on the road—slowing down and being purposeful. We’ve always trended toward being vegetarian-ish for health and environmental reasons. But in the last few months, we’ve read and watched even more about plant-based diets and its benefits and effects on both the body and the planet. So we’ve recently made the decision to go to a full plant-based diet, which has aligned really well with van life. 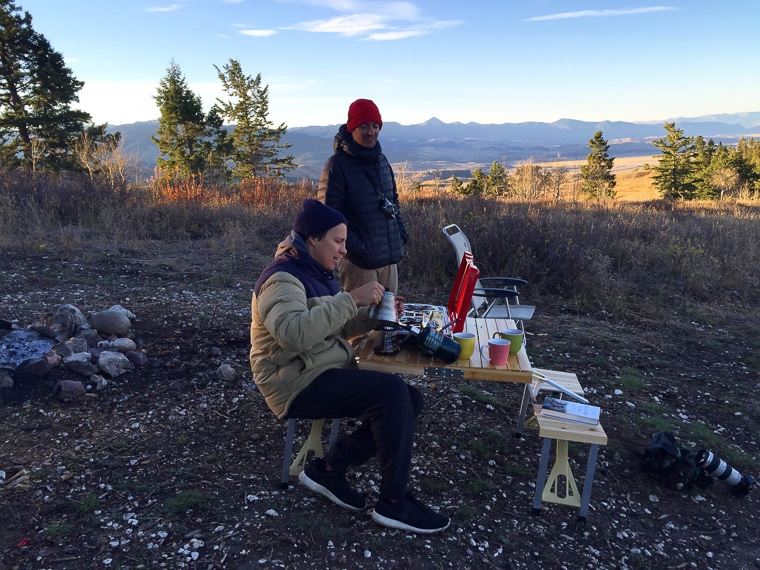 What are your five essential kitchen items?

What’s the biggest challenge to cooking in a van?  Do you have any tricks that make cooking easier for you?

I’d say the absence of running water for rinsing and cleaning, an oven, and space. We’ve used our big cooking pot, which we normally use for soups and cooking pasta, as sort of an oven, putting it on low heat and cover. And we pull our bench seat, which also acts as storage, out and use that as extra counter space sometimes. 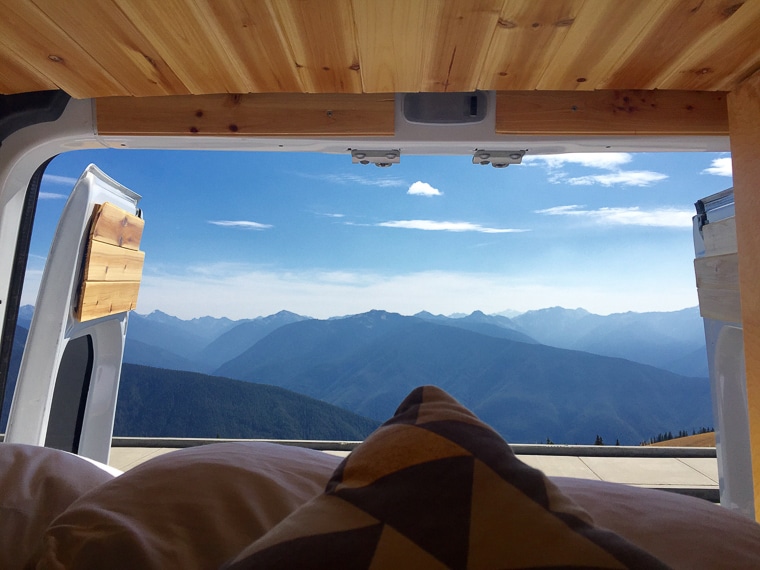 Where was the most scenic meal you’ve had on the road?

Hmmm, I’d say it was during our first week on the road when we made French toast with the doors open on the slide of a cliff overlooking the Pacific Ocean in Mendocino, California. That was one of the first “pinch-me” moments, where we realized this was our life and we get to do this for an indefinite future. 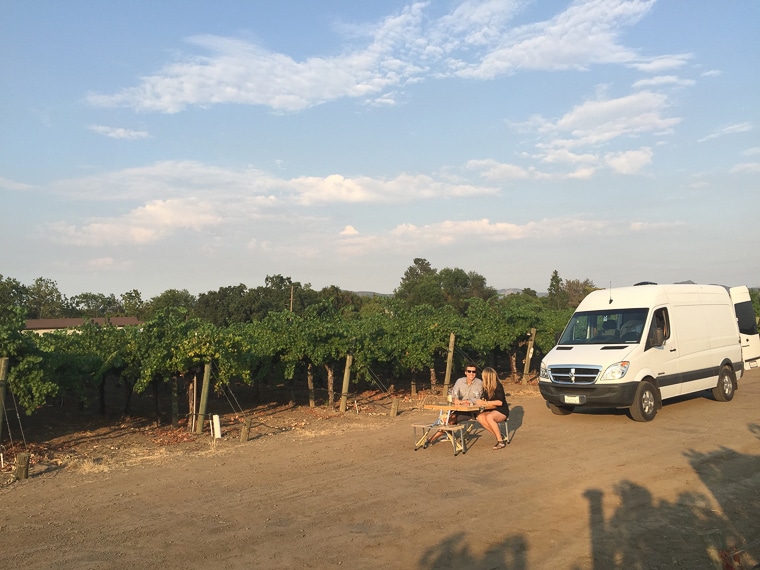 One guilty pleasure or item you know is excessive but you can’t live without?

Aside from our bikes and the occasional bottle of wine, I can’t really think of anything. With only 80 or so square feet of space, we don’t have much room for useless things. Actually, we probably we have too many puffy coats. Even though they pack down pretty easily, we still have too many. 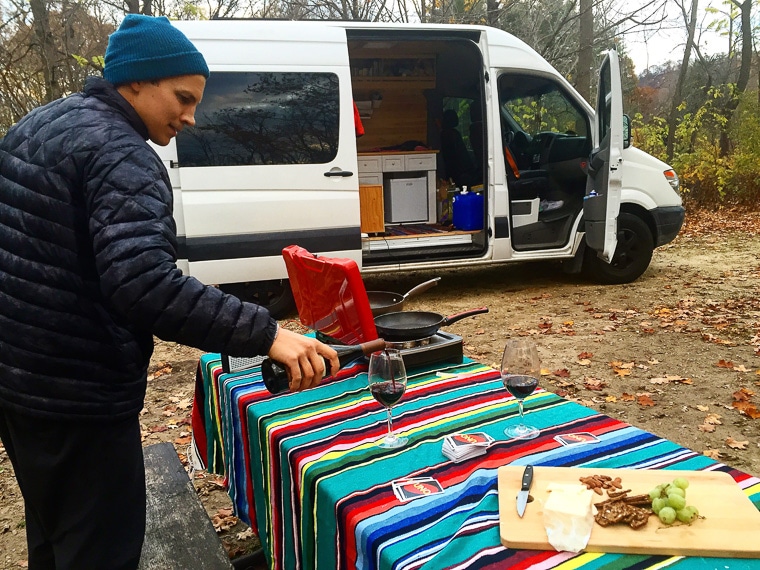 Since it’s tough to make ice in our mini-fridge, we’re more wine and beer #vanlifers. But a greyhound in the summer is pretty damn tasty.

What has been your best (or perhaps worst) camp cooking fail to date?

Do soapy-tasting scrambles count? Again, the dishwashing situation can be challenging sometimes… 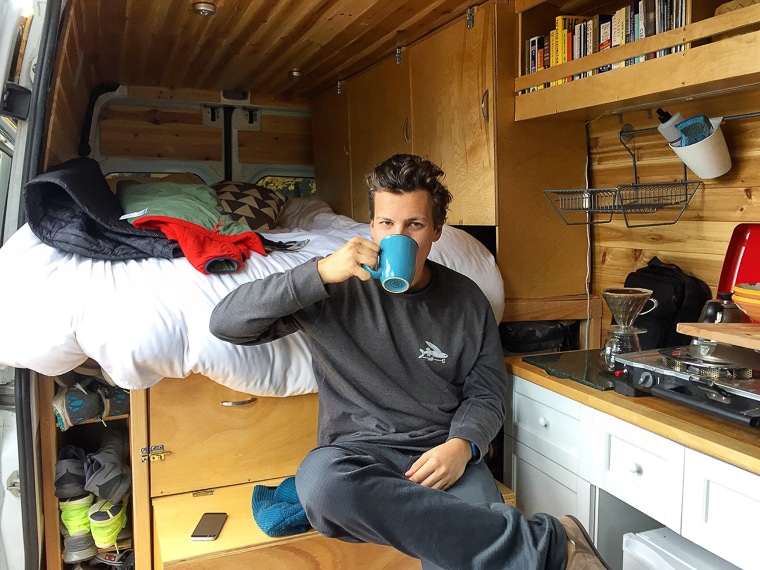 Who makes the coffee in the morning? What does your setup look like?

This one is easy: me. Making coffee, especially with the slow pour-over method, is my morning meditation. It’s calming and exciting since we love coffee and how nourished we feel drinking it every morning. Janna likes to stay in bed and/or hop in the passenger swivel seat and read, so it’s fun to deliver a fresh cup of deliciousness her way. We have one of those fancy Hario kettles, which is pretty much essential for the methodical pour-over brew method, and a pour over kit that includes a dripper filter and glass server pot. It’s heaven.

What’s your go-to meal? Would you share the recipe with our readers?

We make a lot of bowls featuring quinoa, black beans, a bunch of veggies (which typically includes, depending on the season, bell peppers, onion, corn, sweet potato), avocado, and garnished with cilantro. This veggie chili with portobello mushrooms acting as the meaty-tasting protein is a go-to, as it’s healthy, delicious, and easy to make. But lately we’ve been using this killer cookbook, called “The Plantpower Way” to make awesome salads with a delicious vegan dressing made of nutritional yeast, cashews, garlic, avocado, lemon, dijon mustard, and pepper, in addition to a crumbled walnut “Parmesan”. 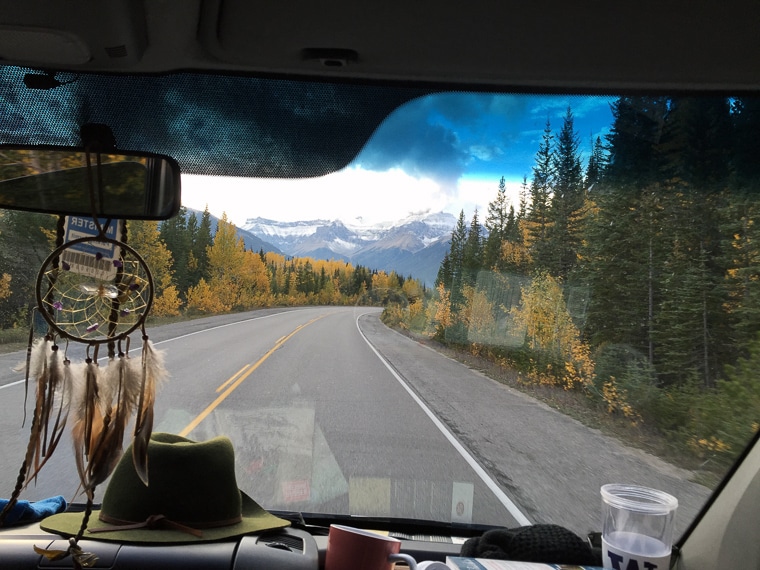